The band structure is one of the central concepts in solid state physics . Many fundamental properties of a solid can be understood with the help of the band structure, for example:

Free electrons of mass have a parabolic dispersion relation, i. That is, the relationship between the wave vector (the magnitude of the wave vector is the circular wave number ) and energy is given by

with Planck's reduced quantum of action

" Free " means that the electrons do not interact with other electrons and are not in any potential . This situation is described by the following Hamilton function :

Electrons in a solid, also known as crystal electrons , can no longer be viewed as free particles due to the influence of the periodic lattice potential. In the simplest case, a crystal electron can then be described as a quasiparticle with an effective mass that deviates from the mass of the free electron , which in the dispersion relation leads to parabolic curves of deviating curvature .

The complete dispersion relation of the crystal electrons is described by the band structure: this represents the energy over the wave vector (graphically). In the direct vicinity of the points of high symmetry, such as the point , the parabolic shape of the curves can still be seen.

An energy band, such as the conduction or valence band , results from the energy range covered by the associated curve: there are permitted states in the momentum space for these energies. The area of ​​the band gap (non-existent in metals) is free of electrons, however, since there are no allowed electronic states there. This is why this area is often referred to as the “energy gap” or “forbidden zone”.

Direct band transitions take place practically without changing the momentum vector , i.e. perpendicularly in the diagram (the momentum transfer through the photon to the electron is comparatively small and therefore negligible). They are very likely because in addition to the supply of the necessary jump energy, e.g. B. by a photon, no additional condition has to be met. 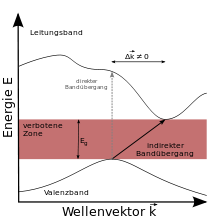 In the case of indirect band transitions, the momentum vector also changes, so they are "oblique" in the diagram. In order to trigger such transitions, in the case of interband excitation, not only the energy has to be supplied, but also the additional pulse. This can e.g. B. be done by a suitable phonon, as it can exist at temperatures above absolute zero due to the thermal lattice oscillation . This combination of two conditions means that indirect transitions are generally significantly less likely than direct transitions. The probability of indirect band transitions is also temperature dependent.

In the case of semiconductors , depending on the nature of their fundamental absorption , one speaks of direct or indirect semiconductors.

Transitions within a band are also possible; they are accordingly called intra- band transitions . The momentum vector always changes , usually also the energy. Exactly as with an indirect interband transition, both the differential energy and the additional impulse are necessary for triggering.

If one plots the dispersion relation , i.e. the energy of the electrons over their wave vector , in a diagram , one obtains alternately permitted energy ranges (energy bands) and forbidden energy ranges (energy or band gaps ) with regard to a wave vector (corresponds to the direction of propagation and is proportional to the momentum ). Overlapping of energy bands can also occur (e.g. with polyvalent metals). A continuous course of the energy depending on the wave vector is only obtained for an infinitely extended crystal.

There are three variants of such band structure diagrams (also known as zone schemes or energy wave vector diagrams):

Distinctive points in the band structure, the symmetry points as, among others, the Γ-point . Here is the impulse . Depending on the crystal structure, certain directions of propagation are energetically very favorable for electrons. At these points one can find minima in the band structure, which means that the charge carrier density tends to be higher along these directions of propagation (but also depending on the temperature).

The belt structures of real materials are generally calculated using the belt model . Here, the crystal is only approximated using a single-particle Schrödinger equation and solved with the help of approach functions in the form of Bloch functions . These are initially composed of a complete set of an infinite number of basic functions , whereby the explicit mathematical form can be very different depending on the model used. The most important approaches are the Fourier series approach in the model of quasi-free electrons and the linear combination of atomic orbitals in the tight-binding method. In practice, the infinitely long sums are approximated with a finite number of basis functions, whereby depending on the model used and the material considered (especially the dependence on the type of bond ) the number of terms used can vary greatly until the energies converge. Often, the numerical effort is reduced considerably when using symmetry properties . As a result, the band structure of real materials can now be determined with relatively manageable numerical effort. The three most common models are:

Band structures of real crystals can be very complex (example: GaAs and AlAs). Usually the dispersion relation is represented in a one-dimensional scheme, whereby the connecting lines between different characteristic points of the Brillouin zone are simply attached to one another.

In every real crystal there are additional localized states in the energy range of the band gap , which result from impurities, lattice defects or surface effects. These states can be generated systematically and used for applications, e.g. As the doping of semiconductors or color centers .