An imaging method creates an image from measured variables of a real object , the measured variable or information derived therefrom being spatially resolved and visualized in a coded manner using brightness values ​​or colors .

Example of two imaging processes: The thermal image on the left shows the temperature distribution of a coffee machine with two jugs, derived from the infrared radiation. The legend in the middle shows the false colors used . The same object is shown on the right in the visible spectral range.
Remarks: The cylindrical jacket allows part of the emission from the still hot funnel to pass through. The steel bands around the glass jugs have a high degree of reflection , i.e. a small emissivity , which causes a reflex on the left, cold jug and a dark band on the right, hot jug.

Imaging processes are used in almost all scientific areas ( archeology , material testing , remote sensing and others). The expression “ imaging procedure ” is particularly widespread in medicine and is mostly used here with the following meaning: “Generic term for various diagnostic methods that provide images from inside the body”. The most important imaging methods in medicine are ultrasound, X-ray and nuclear diagnostics, magnetic resonance and computed tomography and endoscopy. The microscope is now rarely associated with the term.

The term "imaging" was already used by the mystic Heinrich Seuse (1295 / 97-1366) in his vita , where he wrote of "bildgebender wise" ("imaging manner") and "bildgebender glichnus" ("imaging parable"). "Imaging procedures" have been used in medicine since the late 1970s.

The oldest and simplest device in an imaging process is the pinhole camera . It was already being used by astronomers to observe sunspots at the end of the 13th century. As with all photographic processes, the energy and color (wavelength) of the light emitted by the object are used as the measured variable. This light creates an image of the object on the back of the camera. In this fleeting image one recognizes the brightness and the color of the object in a spatially resolved manner. In contrast to the real object, however, it is only a two-dimensional representation. Painters in the time of Leonardo da Vinci used the pinhole camera as a drawing aid for the detailed depiction of reality. Back then, drawing and painting were the only ways to keep a picture permanently.

Telescope and microscope are other imaging devices whose developments took place around 1600. Although they also use the color and brightness of objects to generate images , they allow the visualization of things that would not be visible without these methods.

A direct implementation as a permanent image became possible when Joseph Nicéphore Nièpce invented the photographic plate in 1826 . Photography , thus invented , made use of light-sensitive substances (photographic layers) arranged in thin layers and soon led to the development of high-speed camera lenses. Today image sensors are increasingly taking on the role of the earlier photographic layers (see digital photography ).

Wilhelm Conrad Röntgen recognized in 1895 that the X-ray radiation named after him is able to penetrate matter that is impermeable to visible light. He discovered that different materials attenuate the radiation to different degrees. The basics of X-ray technology were laid and the first X-ray images were taken. The picture of the hand of his wife Anna Bertha (December 22, 1895) does not show the visual impression of the hand created by light, but rather the different absorption of X-rays by different materials and their distribution inside the hand for image generation . In the image of the hand, the radiopaque bones and the finger ring appear dark, while the soft tissue is irradiated almost unhindered.

Another major milestone in the history of imaging techniques was the invention of the electron tube , which can be regarded as the basis of the electronic signal processing. This enabled the use of many new measurands. At around the same time, the picture tube was also developed, which could now also display moving images. The line-by-line structure of the picture in the picture tube was also used in part in the area of ​​measurement data acquisition. The sequential scanning of the object can still be found today in the principle of the scanning electron microscope , the profilometer or in the image sensor , in which the light signals are recorded in parallel but read out sequentially. 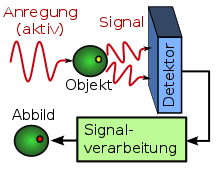 Basic principle of an imaging procedure

An imaging process measures physical quantities of a real object. Depending on the method and type of signal, additional processing or evaluation of the measured values ​​takes place until the information is available in the desired form. They are shown spatially resolved as an image of the object. The information is presented as brightness values ​​or coded using false colors. The type of representation depends on the method used, the object and the question.

The objects examined can be very small (e.g. for analysis using microscopic and spectroscopic methods in materials testing), living beings or parts thereof (e.g. sonography or tomography in medical diagnostics), entire landscapes (e.g. Synthetic aperture radar in navigation or remote sensing ) or even parts outside of our solar system (e.g. radio telescopes for exploring other galaxies in astronomy).

As already shown in the History section , various media are available for the visualization of imaging processes. The image of the object can be analog or digital z. B. held permanently in the form of a film, photo, printout or digitally stored or displayed as a fleeting representation by projection, screen display.

Regardless of the output medium, there are various types of display options for the measured or calculated information. This is especially true when

Especially in the case of a 3D data set, sectional images or sectional image series of the body are often calculated. The orientation of the sectional plane and the position are usually freely selectable. In contrast to a projection method such as irradiating a body, details above or below the layer of interest can be masked out. In the example below, the interfering information of the ribs was removed using the cutting plane technique. In some cases, 3D reconstructions are created for the diagnosis or evaluation, which can be oriented anywhere in the room and allow views from all sides.

A representation of the results in the form of measuring bars or spectra does not correspond to the definition of an imaging method, since the information is not represented spatially resolved in relation to the examined object.

Imaging processes in science and technology

In medicine, a different definition is usually used for imaging methods: "Generic term for various diagnostic methods that provide images from inside the body."

Photography as an imaging process

The imaging process in photography works largely with light and mimics the way the human eye works. In the analog process, a light image is projected onto a light-sensitive medium with the help of optical processes and stored there directly and permanently. In the digital version, image information is converted into electronic data. The image corresponds to the optical perception of the human being, even though certain impressions of the photographed object are created through the image composition and lighting, which leave room for the viewer to manipulate.

Depending on the wavelength of the electromagnetic radiation , different information about the object is obtained:

Extremely short-wave radiation ( gamma or X-ray radiation ) penetrates most of the materials in a component. This enables internal structures and imperfections to be made visible. Applications are e.g. B. X-rays or computed tomography , which are also used more and more frequently in materials testing. This can e.g. B. in the context of a damage analysis or quality assurance.

The visible spectrum (light) can be used directly for imaging in imaging processes. Typical optical methods are photography or light microscopy. If the component is illuminated with UV light, however, material differences can also be visualized using fluorescence effects that would not be visible to the naked eye with normal lighting. Using lasers ( laser scanning ) or using stripe projection methods, however, it is also possible to measure the 3D structure of an object. If the measurement results are then displayed as an image, this can also be referred to as imaging processes.

Infrared radiation (IR) can be used in thermography to show the distribution of heat on surfaces. A building thermography can be used to detect weak points in the insulation or moisture in walls. In the industrial sector, however, thermography is also used to analyze or monitor processes. Furthermore, the infrared radiation can also be evaluated spectroscopically ( infrared spectroscopy ). The absorption of infrared radiation through molecular vibrations is measured; this information can be used to make chemical reactions visible and provide information on the structure of organic compounds, for example . If the detected signal is shown spatially resolved for certain wavelengths in an image, a material distribution in the object can be visualized with a corresponding selection of the vibration bands shown.

In the case of the terahertz radiation following the IR radiation , it was found that this clothing penetrates almost without weakening, but is strongly reflected by metal or water. That is why systems with this technology are also used at some airports for identity checks. This process went through the media under the term “ naked scanner ” and is not yet in use in Germany. Terahertz radiation, as well as radiation in the subsequent microwave range, are used in radio astronomy to explore space.

In the microwave range , the reflections are used for imaging. Applications are weather monitoring (stationary or in aircraft), traffic monitoring in air traffic control and orientation on waterways in fog ( ship radar ). The radar is also used in the military.

In dense media such as water, sound waves have a significantly greater distance than electromagnetic waves (e.g. visible light), which are relatively strongly absorbed . Sound waves are therefore of great importance for measuring physical, chemical and biological quantities in the ocean. As with imaging sonars, the information can be represented as an image. One example is the side -scan sonar that is used to explore the sea floor. In addition to the shape of the sea bed ( topography ), material differences (e.g. sand, rocks or silt) can also be recognized. Simple devices are also used in water rescue. As an alternative to the side-scan sonar, some modern high-resolution fan-shaped plumb bobs with a similar resolution can be used.

Sound waves can also be used to characterize the interior of solids. Reflections occur at material boundaries so that cavities or materials of different densities can be visualized with regard to their size and position. An example here is sonography , which works with ultrasound and is mainly used in the medical field. In the field of materials science, the even shorter-wave hypersonic is used. With wavelengths that are in the range of visible light, acoustic microscopes are possible. B. can be used in electronics for the non-destructive investigation of the quality of conductor paths.

The term scanning probe microscopy covers various methods that scan the surface of a sample with a fine needle. The height information is obtained for each point on the surface ( topography ) and thus a complete set of three-dimensional coordinates that are displayed as a false-color image or 3D structure. In addition, atomic force microscopy also allows the measurement of other interactions between the needle tip and the surface. So z. B. local variations of magnetic field strengths , chemical properties, material hardness, etc. can be determined and visualized.

The scanning electron microscope uses for imaging electrons , which are emitted from the sample. Depending on the type of evaluation, images are obtained which show the surface shape or the material distribution in the examined object. With the Focused Ion Beam , however, ions are used to image the surface.

If the mass of the ions emitted by the sample is evaluated by mass spectrometry , the distribution of the corresponding compounds can also be displayed as an image. All processes that evaluate matter radiation are very surface-sensitive.