Similar to gravimetry , geomagnetics is one of the potential methods and, like these, can be used universally and inexpensively. For many applications it can even be done from an aircraft ( aeromagnetics ). The interpretation (interpretation of the measurements) can be ambiguous, as with other physical fields .

In the scientific umbrella organization of the IUGG (Union for Geodesy and Geophysics), magnetics is represented by the IAGA (International Association of Geomagnetism and Aeronomy). With the branch of magnetotellurics , it is also at the transition to geoelectrics .

The terrestrial magnetic field induces magnetic properties (induced magnetization ) in all substances . However, the influence can differ by many orders of magnitude because the magnetic susceptibility strongly depends on the substance (various rocks , ores , metals or ceramics in a landfill , etc.). Induction in the earth's magnetic field turns these bodies into magnets themselves . Their magnetic field is superimposed on that of the earth as an interference field that creates " anomalies " in the normal field.

Before interpreting such anomalies, the so-called normal field must be subtracted from the measured field strengths . It can be viewed approximately as a dipole field , whereby the fictitious dipole is not exactly in the center of the earth , but about 400 km eccentric (in the direction of New Guinea) and its axis is inclined by almost 12 ° to the earth's axis. About 10% of the normal field is due to atmospheric induction, which can vary with solar activity ( solar wind ).

Areas of application of geomagnetics 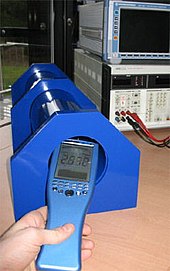 Suitable measuring devices can find geophysical anomalies, some of which make up less than 1 per thousand of the main earth magnetic field. To evaluate the measurements, modeling methods are used that allow statements about the position, depth, shape and composition of the disruptive bodies .
However, these conclusions about the magnetization or mass distribution are often ambiguous - see the inverse problem of potential theory .

Geomagnetics is used, among other things:

The measuring systems of the gradiometer measure with two probes at intervals of less than 1 m, e.g. B. to detect fine vertical changes in the earth's magnetic field . Magnetic signatures as well as fluctuations over time can be interesting.

With the help of a so-called zero Gaussian chamber , an almost field-free space can be created. It serves z. B. for the calibration of measuring devices and sensors in conditions that are almost free from earth magnetic fields. A fully annealed Mu-metal shield is used as the material. So u. a. enables reproducible measurement results at any location. Conversely, field-free spaces or certain variants of the magnetic field can also be actively generated and adjusted by the action of electromagnetic coils.