Surface chemistry ( English surface chemistry, surface science ) is a branch of physical chemistry , in which the chemical and structural processes are investigated that take place at interfaces , mostly solid / gaseous. Surface-sensitive analytical methods are used for which several Nobel Prizes have been awarded in the last few decades . Since the structures examined are in the nanometer range, surface chemistry is one of the nanosciences .

The area of ​​a solid body is defined as the surface in which the physical and chemical properties (e.g. structure, electronic properties ) differ from the rest ( bulk ), with the deviation from the volume properties i. a. decays exponentially with distance from the surface (proportional to ). The ideal image of a surface is analogous to the ideal solid body, a strictly periodic, infinite arrangement of atoms or molecules in two spatial directions .

A periodic arrangement of atoms or molecules on a surface can be described in two dimensions with a Bravais lattice , analogous to a solid . There are five Bravais grids in two dimensions, the square , the rectangular , the rectangular body-centered, the diamond-shaped and the hexagonal structure, whereby the hexagonal or rectangular body-centered structures can be viewed as special cases of the diamond-shaped structure with certain angles.

A unit cell reflects the symmetry of the Bravais lattice, it has the same elements of symmetry . Due to the periodicity of the grating, the unit cells can be mapped onto one another using a translation vector. The unit cells themselves are spanned by linearly independent unit vectors and . The following applies:

One can the grid in a different room with other basis vectors and transform. Do you work z. B. with diffraction methods, one measures the unit cell in reciprocal space , also called k-space.

The vectors of the unit cell in spatial space can u. U. can be determined by means of scanning tunneling microscopy . The average size of the unit cell in reciprocal space is obtained, for example, from the diffraction of slow electrons (LEED) on the surface.

A special type of unit cell is the Wigner-Seitz cell . It corresponds to the first order Brillouin zone in k-space.

Points and lines in the grid

A point in the grid is described by a vector from the origin to the point. A straight line is described with a vector that is parallel to the grid line.

When a single crystal breaks, it often happens along the lattice plane . This creates surfaces that differ in their 2-dimensional surface structure depending on the 3-dimensional crystal structure and cutting direction. The cutting planes can be described by the points of intersection of the plane with the axes of the coordinate system . The more common notation, however, is the specification of the Miller indices , which are the integer multiple of the reciprocal axis intercepts. z. B. (111), (110), (100)

Superstructures are additional, larger structures that are formed by rearrangement or adsorption on the surface. They can be described with vectors and as multiples of the basic vectors and , by Wood's nomenclature or by matrix representation .

Before a surface can be reproducibly analyzed on a microscopic scale , it has to be freed from contamination. To protect it from further contamination, it is handled in an ultra-high vacuum (UHV) ( ). This reduces the surface impact rate of impacting molecules from the gas phase. This is for a gas particle of the type

In a study with an organic molecule layer adsorbed on Ag (111), a reaction with oxygen gas could be made visible directly in the local area using scanning tunneling microscopy .

Possible causes for surface contamination include: B .:

Typical nanoscale defects on single crystal surfaces [e.g. B. the Ag (111) surface] are steps, kinks as well as atoms released from terraces. These can be made visible on an atomic scale using scanning tunneling microscopy and are generally more reactive than atomically smooth terraces.

After machining (e.g. grinding, turning), workpieces generally have residues such as oils, dust, abrasion or abrasives. These residues usually have a negative effect on the processing steps and must therefore be removed. Typical procedures are:

Further layers of atoms or molecules can be applied to a surface in order to modify the properties of the interface. This allows z. B. accommodate semiconductor components in three-dimensional form in an integrated circuit (IC) because they are separated by the layers. An important tool in basic research is the chemisorption of probe molecules whose vibration properties are e.g. B. give information about the surface. The layers are applied i. a. with one of the following methods of thin film technology :

Examples of questions in surface chemistry are: the elemental composition of surfaces, the concentration of elements in the surface area, the distribution of elements in the depth profile of the surface and the chemical bonding of adsorbates . Also the study of the kinetics of adsorption , the adsorption and desorption kinetics , and the (e) structure at the interface and the vibration characteristics are functions of the surface chemistry. Furthermore, surface chemistry deals with reaction mechanisms of heterogeneously catalyzed reactions, creates models for catalytic reactions for the development of industrial catalysts and investigates the diffusion of adsorbates on surfaces (surface dynamics ) as well as the oxidation state of surface atoms. 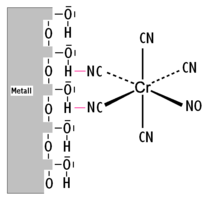 The production of surface complexes is of great importance for heterogeneous catalysts .

Acid-base reactions in particular also take place on the surface . The hydroxide groups can react either as a Brönsted acid or a Brönsted base. Depending on the metal, the Brönsted acid has a different acidity . Such surfaces play an important role as catalysts for acid-catalyzed reactions in non-aqueous solvents and in the gas phase. Centers on metal oxide surfaces that can react as Lewis acids also play a role in catalysis . The number of metal cations and thus the Lewis acidity increase, especially at higher temperatures. 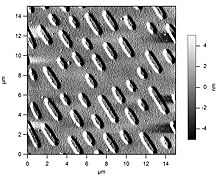 Atomic force microscope image of the data layer of a compact disc .

Surface analytical methods are used in industry and in basic research.

In order to be able to investigate the processes at interfaces, methods must be used that only “see” processes in the area of ​​a sample that differs in its properties from the rest of the solid . For this purpose, the interactions of the following waves / particles with matter are used:

The mean free paths of charged particles are due to Coulomb interactions i. a. much smaller than that of neutrals. Another strong influence is the kinetic energy of the particles; In certain energy ranges, processes can be stimulated, which reduces the mean free path. It is decisive for the surface sensitivity of a method that either the particle or wave that interacts with the sample or the detected particle or wave has a short mean free path in the matter. That is why an ultra-high vacuum is necessary for many methods . The method chosen depends on the question. The following overview is only intended to give an overview. There are also different spatially resolving techniques for several methods. For further description see their article. Each of the methods has advantages and disadvantages that must be taken into account in the experiment. 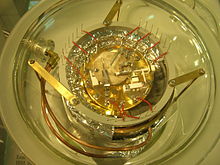 The first scanning tunneling microscope from Rohrer and Binnig 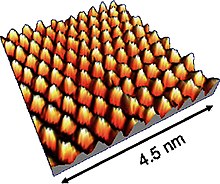 The surface of sodium chloride imaged with an atomic force microscope in non-contact mode, with the individual atoms being recognizable as elevations or depressions.

STM image of a graphite surface in atomic resolution. 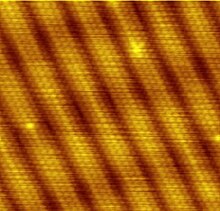 Photoresist in the electron microscope 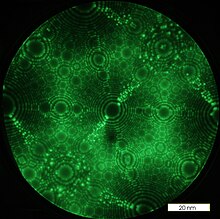 FIM image of a tungsten tip in (110) orientation at 11 kV. The ring structure results from the arrangement of the atoms in a krz lattice. Individual bright points can be interpreted as individual atoms.

Example of an XPS spectrum 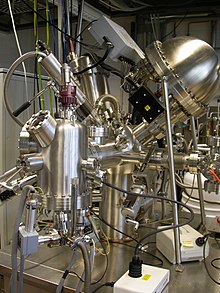 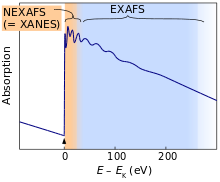 X-ray absorption spectrum in the area of ​​an absorption edge (schematic). The edge is marked with an arrow and the energy range examined by EXAFS is highlighted in light blue.

Certain types of radiation can stimulate several processes, which can have advantages and disadvantages for the respective method. For example, during ionization by X-rays, Auger electrons and photoelectrons can be generated at the same time, which may overlap in the spectrum and thus make evaluation more difficult. On the other hand, with TEM, additional information about the sample is obtained in an apparatus through the additional emission of Auger and photoelectrons, backscattered electrons, emitted particles and EELS.

The XPS, AES, SIMS and ISS measurement methods are referred to as the “Big Four”.

Nobel Prizes for developments in surface chemistry and surface physics