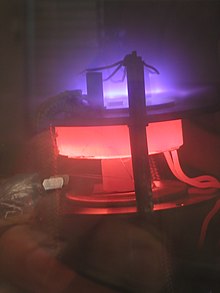 However, the history of the process begins much earlier. As early as 1852, the German chemist Robert Wilhelm Bunsen reported on the separation of Fe 2 O 3 from gaseous iron chloride (FeCl 3 ) and water vapor. Depending on the definition of the term, significantly older reports on CVD processes can also be found.

Due to a chemical reaction from the gas phase, a solid component is deposited on the heated surface of a substrate .

The prerequisite for this is that there are volatile compounds of the layer components that deposit the solid layer at a certain reaction temperature.

The chemical vapor deposition process is characterized by at least one reaction on the surface of the workpiece to be coated. At least one gaseous starting compound ( starting material ) and at least two reaction products - at least one of which in the solid phase - must be involved in this reaction .

Chemical vapor deposition processes are mostly operated at reduced pressure (typically 1–1000 Pa) in order to promote those reactions on the surface compared to competing gas phase reactions and thus avoid the formation of solid particles.

A special feature of the process is the conformal layer deposition. In contrast to physical processes, chemical vapor deposition also enables complex three-dimensional surfaces to be coated. So z. B. finest depressions in wafers or hollow bodies are coated evenly on their inside.

Precise deposition can also be achieved with the help of focused electron or ion beams . The charged electrons or ions cause the substances dissolved in the gas to be deposited in the irradiated areas. Such electron beams can be generated, for example, with a synchrotron or a scanning electron microscope . The ion beams can be generated with an FIB device . These also enable selective gas-assisted ion beam etching.

Coatings are used in the electronics industry to e.g. B. Si 3 N 4 , SiO 2 , poly-Si, crystalline Si (Epi-Si) and SiON x to be deposited on wafer surfaces.

Before the deposition, the wafer is cleaned in a dry etch process , in which either sulfur hexafluoride or a mixture of tetrafluoromethane and high-purity oxygen are used. Nitrogen and hydrogen serve as carrier gases. The CVD reaction chambers are cleaned with nitrogen trifluoride .

For the structuring of silicon by etching processes, an epi-Si layer doped with boron can be deposited as an etch stop layer by means of gas phase epitaxy .

Outside of the electronics industry, the refinement of glass and the manufacture of fiber optic cables for optical communications technology are one of the largest areas of application for chemical vapor deposition. Every year around 10 million m² of architectural glass are coated with thermal protection layers made of fluorine-doped tin oxide. Another important application of tin oxide layers is to protect container glass. The coating on the outer surfaces protects the glass against mechanical shock loads, for example in bottling plants. Further applications are optical layers on glass, on plastic and gas-tight barrier layers.

Boron-doped CVD diamond electrodes are u. a. used in industrial water treatment for wastewater oxidation and disinfection of process water.

Not every desirable layer has a gaseous compound from which it could be made.

Another limitation of the process is the high temperature load on the substrate. The heat load can, among other things, cause distortion on workpieces or lie above the softening temperature of the material to be coated, so that the process cannot be used. In addition, diffusion processes occur at high temperatures, which means that doping profiles are smeared or metals diffuse in after coating processes. However, there are also variants in which the thermal load is lower and thus the negative effects are reduced.

The temperature load on the substrate can be reduced by means of the plasma-enhanced chemical vapor deposition ( plasma enhanced CVD , PECVD ). A plasma is ignited above the wafer . This can be done either inductively ( inductively-coupled PECVD , ICPECVD) or capacitively ( capacitance-coupled PECVD ). This CVD process takes place at temperatures between 200 and 500 ° C. Since the thermal energy for pyrolysis is insufficient at these temperatures , the gas is excited and decomposed by a plasma. Furthermore, the deposition rate is increased by the plasma excitation. However, there is the disadvantage here that the crystal structure of the wafer is damaged by the radiation from the plasma . In addition to these direct plasma processes, there is also RPECVD ( remote plasma enhanced CVD ), in which the plasma is spatially separated from the substrate. This reduces the stress on the substrate from ion bombardment and radiation.

The HFCVD process (ger .: hot filament CVD , dt. "Hot wire-activated chemical vapor deposition"), and hot-wire CVD or catalytic CVD called the film deposition possible by the recipient stretched filaments (wires), which are usually made of tungsten , tantalum or rhenium . An applied voltage causes the filaments to glow, with wire temperatures of up to 2600 ° C being reached. The gases used are split into radicals by these high temperatures on the filaments and the species thus formed ensure the layer structure (e.g. production of polycrystalline diamond layers).

With metal-organic chemical vapor deposition (engl .: metal organic chemical vapor deposition , MOCVD, also: OMCVD) the chemical deposition from organometallic starting compounds is referred to. A subgroup of the MOCVD is gas phase epitaxy ( metal organic vapor phase epitaxy , MOVPE ), in which very high quality crystalline layers are produced. In the field of compound semiconductor production such. B. III-V and II-VI semiconductors , these terms are used for identical processes, depending on the language area.

An excellent overview of chemical vapor deposition can be found in the classic "Vapor Deposition" by Powell et al. which, despite its age, is still very current in the basics.