The longhouse from above

Unfinished main facade on the northern narrow side 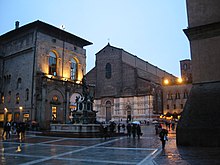 View from Piazza Nettuno (with fountain ) to Piazza Maggiore with San Petronio, on the right the Gothic Palazzo dei Notai, on the left the Romanesque rear of the Palazzo del Podestà

The Basilica of San Petronio is the main church of Bologna . Deviating from the west-east orientation of most medieval churches, their building axis is north-south, the main altar is in the south. The facade dominates the Piazza Maggiore . With its enormous dimensions (length 132 m, width 60 m, vault height 45 m) it is the fifth largest church in the world, with an enclosed space of 258,000 m³ the largest brick church ever. For comparison, the three largest brick churches north of the Alps: The volumes of the Munich Frauenkirche , the Ulm Minster and the Danzig Marienkirche are around 200,000 m³. What is remarkable about the interior of San Petronio are the play of colors on the walls, the polychrome glass windows and the historic organs.

To St. Dedicated to Petronius , Bishop of Bologna in the 5th century and patron saint of the city, the basilica dates back to 1390 when the city of Bologna commissioned Antonio Di Vincenzo to build a huge church in Gothic style .

Arduino degli Arriguzzi plans to expand it in 1514 should have made it larger than the (old) St. Peter's Basilica in Rome . According to tradition, this intention is said to have been abandoned by order of Pope Pius IV - Bologna was part of the Papal States. It bears the title of a minor basilica .

The basilica enjoyed fame from the beginning, so that it was chosen by Charles V for his imperial coronation by Pope Clement VII in 1530.

The church was built over centuries. After the first design of the facade in 1393, work began on the side chapels, which was not completed until 1479. The decorations of the central nave were made by Girolamo Rainaldi between 1646 and 1658.

The structure of the facade was enriched by the addition of new side portals, which should complement the main portal of Jacopo della Quercia . However, the construction was temporarily stopped and later resumed. Many architects (including Baldassare Peruzzi , Giacomo Barozzi da Vignola , Andrea Palladio , Leon Battista Alberti ) were consulted for an overall concept, but without ever finding a final solution. The facade is still unfinished today.

The basilica was only given to the diocese in 1929 and consecrated in 1954. Only since 2000 has she kept the relics of her titular saint , which until then were in the Basilica of Santo Stefano .

The following works of art can be seen in the interior: Mystical Marriage of St. Catherine by Filippino Lippi , a Madonna with saints by Lorenzo Costa the Younger , The Lamentation of Christ with four saints by Amico Aspertini .

The ciborium above the high altar was made by Giacomo Barozzi in 1547.

Cappella dei Re Magi: marble balustrade and fresco of the Last Judgment

The fourth chapel on the left, Cappella dei Re Magi (the Wizard Kings - Three Kings), by one of the artists also Capella Bolognini called, is preserved in the design from the beginning of the 15th century, has a balustrade of marble in forms the late Gothic and Proto-Renaissance . Above the altar is a painted polyptych made of golden and multicolored wood with 27 pictures carved and painted in marble. All the walls were painted by Giovanni da Modena : on the right the journey of the three kings, on the front wall known events from the life of St. Petronius. The frescoes of the Last Judgment on the left are a three-part representation based on descriptions from Dante's Divine Comedy . Above is paradise , the place of the saints, with the coronation of Mary by Christ in a deesis representation . Below are the Archangel Michael and Hell divided into rooms with a huge representation of Lucifer .

Above right, as seen from Lucifer, is a bearded man wearing a headscarf who is being grabbed by the head by a demon . This is the Islamic prophet Mohammed (the corresponding lettering uses the spelling "Machomet" at the time). Giovanni da Modena took his inspiration for this from Dante's work, where the founder of the religion had to suffer agony in hell . This part of the fresco can be integrated into the portrayal of Muhammad , which was exclusively negative at the time , and thus also his punishment. The Islamophobic visualization of the prophet is criticized by Muslims. In 2001, Adel Smith , founder of the Muslim Union of Italy , urged Pope John Paul II and Cardinal Giacomo Biffi to remove the portrayal of Muhammad, which Smith said was worse than the novel The Satanic Verses . Although there was no action on the part of the Catholic Church , Smith's letter is seen as the trigger for two planned terrorist attacks on the basilica.

In the crypt there is a triumphal cross group from 1160 to 1180 , one of the oldest preserved.

In the church you can also admire the Giandomenico Cassini meridian , which was laid out in 1655 according to the plans of the astronomer Giovanni Domenico Cassini : at 66.8 m, it is the longest midday line in the world.

High altar with both organs

In San Petronio there are two organs , which are to the left and right of the main altar. These are two of the oldest organs in Italy. The organ on the epistle side dates from the years 1471-1475 and was built by Lorenzo di Giacomo da Prato . The organ on the gospel side was built in 1596 by Baldessarre Malamini . Both instruments each have twelve registers on a manual and are equipped with an attached pedal . The mechanical actions are original. The organs have been changed several times over the years and were most recently restored in 1986 by the organ building company Tamburini.

For the 600th anniversary of the basilica, Arvo Pärt composed the work Statuit ei Dominus , for two mixed choirs and two organs. It was premiered there on October 3, 1990, among others with the dedicatee Liuwe Tamminga .

In 2002 an al-Qaeda cell consisting of five men planned to blow up the basilica . They made themselves suspicious when they made video recordings of the fresco inside the building showing Mohammed as the victim of a demon in hell . They made their terrorist intentions clear in a tapped phone call, which led to their arrest. Another attack plan in 2006, which also had the Metropolitana di Milano as its target, was also thwarted. Seven suspects were arrested.