The Schramberg grammar school is a general education grammar school sponsored by the large district town of Schramberg . About 50 teachers teach about 900 students in grades 5 to 10 and grades 11 and 12 since the school year 2004/2005 introduced the Abitur after twelve years (G8) . The subjects of the grammar school are mathematical, scientific and linguistic .

The five-story building from 1972/73, which is staggered according to height, also includes a gym . The building consists largely of concrete and is supported on pillars. One side of the school faces the mountain, on the other side you can see the Holy Spirit Church . The building was renovated between 2006 and 2007 and decorated in blue and yellow.

With the introduction of the shortened course (G8) in the 2004/2005 school year, the number of teaching hours has increased, especially in the afternoons. The Gymnasium Schramberg has been offering its students lunch at the school since the 2007/2008 school year. It was decided to build a cafeteria for this purpose . 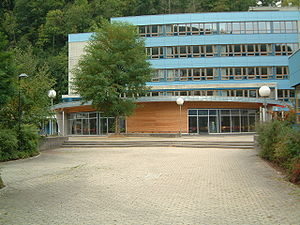 In the foreground the new cafeteria.

The work has been completed. On July 21, 2007, the cafeteria was officially opened. The cafeteria has been in operation since the beginning of the 2007/2008 school year. The building has an area of ​​around 200 square meters, and up to 300 students can get a hot meal there every day.

The history of the grammar school goes back to 1840. On February 21, 1840 funds were approved for a new secondary school , which was then also founded on May 14 of the same year.

The school, which was initially single-class, was looked after by various teachers until it was moved to today's Burgweg 33 in 1876. In 1888, in response to the growing demands of the industrial city of Schramberg, a collaboration class (i.e. auxiliary teacher class) for nine to eleven year olds was set up in the school in addition to the real class for eleven to fourteen year olds. In 1905 the Realschule received its 5th teaching position and was combined with the Latin School to form a six-class school. In addition to boys, girls could now also attend school. In 1906 the new secondary school building in Schillerstraße was inaugurated and the school moved again. During the First World War , all teachers were gradually called up for military service. The use of auxiliary teachers made the lessons very arduous.

In 1936 the headmaster was dismissed for opposition to National Socialism, and in 1937 the school was renamed Oberschule für Jungs by decree . In 1940 the first Abitur exams were held in the now fully expanded secondary school. During the Second World War there was a shortage of teachers. In addition, there were problems with the energy supply and the provision of teaching material. In 1945, French troops marched into Schramberg and classes were suspended until October 1945.

From 1945 the school was called Oberschule Schramberg . Over the next few years there was an acute lack of space, which one tried to counteract with an extension. But the success of this measure was short-lived. In 1957 the exemption from school fees was introduced.

In 1968 the municipal council decided to build a new school building for the Schramberg grammar school, as it has been known since 1953. In 1973 it was inaugurated on Berneckstrasse. In the 1980/1981 school year, the grammar school recorded its highest number of students to date with 1,407 students. The first project days were held in 1983. In 1990 a double anniversary was celebrated: 150 years of the Schramberg grammar school and 50 years of the Abitur at the grammar school. A solar system was installed on the roof of the high school in 1997 through sponsorship by Hansgrohe and the commitment of the Physik-AG. In 1998 a school festival was held to mark the 25th anniversary of the school building in Berneckstrasse. In April 1999, the IT and multimedia room was completely renovated and modernized. The new computer network and a second IT room have been available since 2003. In 2006 a third IT room was set up instead of the language laboratory.

The equipment in the specialist rooms is partly good. Physics has its own X-ray machine , and until recently there was a functioning neutron source in the school basement.

In the grammar school building, a total of four rooms are equipped with PC workstations. From these workplaces there is a broadband connection to the Internet via a fiber optic cable to the Schramberg town hall. Three of the rooms are available to teachers and students for use in lessons, the fourth can be used to obtain information or to prepare lessons during free periods or during breaks. LAN laser printers are also available in three rooms. The projectors, which are mounted on the ceiling of each multimedia room and in the specialist rooms, provide presentation options.

In addition to the multimedia rooms, there is a fiber optic connection in every room in the school building, so that mobile multimedia stations can also be used in classrooms, for example.

The Schramberg grammar school organizes regular student exchanges with various schools. This includes the Georges Cobast College in Hirson , Schramberg's official twin town ; the Sainte-Thérèse school in Quimper in Brittany , the St. Joseph College in Voiron and the "normal school" Andrei Saguna in Hermannstadt (Sibiu) , Romania . An exchange to Poland has already been organized in recent years .

In the following, teachers and school leavers are listed who became known nationwide and throughout Germany.