Johann Georg Heine (born April 3, 1771 in Lauterbach , Black Forest , † September 7, 1838 in Scheveningen ) was a German cutler, instrument maker and orthopedic mechanic. He is considered to be the founder of orthopedics in Germany.

From cutler to orthopedic mechanic

Heine was born on April 3, 1771 in Lauterbach in the Black Forest as the son of the sexton and beer brewer Joseph Heine. He learned the craft of a cutler in Überlingen and went on a journey in the following years , which took him to Esslingen am Neckar , Mannheim and Strasbourg . Finally he left southern Germany and stayed in Berlin from 1794 to 1798 , where he had contact with Barthel von Siebold, the son of the Würzburg surgeon Karl Kaspar von Siebold . In May 1798 Heine moved to Würzburg and founded an instrument maker workshop there. He married Anna Förtsch from Würzburg. Through this he acquired civil rights and was able to obtain the title of master craftsman in 1802, also supported by the Siebold family. With Anna he had two children, Anna (1801–1884), who married her cousin Bernhard Heine , and Joseph (1803–1877), who later became a doctor in the Palatinate.

Own workshop and institute

In 1802, Heine was appointed university instrument maker at the Würzburg University at the Juliusspital and trained as a university bandagist by the Siebolds. In the same year he opened his first own workshop in Strohgasse (today Heinestrasse), where prostheses , stretch beds , wheelchairs and other orthopedic aids were manufactured and offered for sale. With this, the instrument maker Heine created the new job description of the orthopedic mechanic. In 1807, Heine published a "Systematic Directory of Surgical Instruments, Bandages and Machines" as a catalog for the medical profession. His other publications quickly found recognition in the medical community. Heine turned down a call to Berlin; he stayed in Würzburg and received the "Golden Civil Merit Medal" from the hand of the Bavarian Crown Prince. Johann Wolfgang von Goethe knew Heine's publications and included them in his library. He got to know the "operator Heine" at the table of Grand Duke Karl August and was so impressed by him that he invited him to his house on the Weimar Frauenplan.

In 1816, Johann Georg Heine opened the first orthopedic institute on German soil in the former Benedictine monastery of St. Stephan , which later became widely known as the Karolinen Institute , named after the Bavarian Queen Karoline.

When Heine suggested that orthopedic methods should also be used for neurological, pediatric and internal diseases, a conflict arose with the Würzburg medical community, and the decades-long collaboration was over. 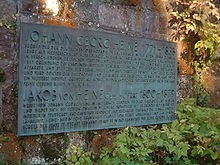 Memorial plaque for Heine in his place of birth Lauterbach

For his services to the academic recognition of the new subject, Heine was appointed Assessor at the Medical Faculty in Würzburg in April 1824 and received, if not a professorship, a teaching position in orthopedics. He was awarded an honorary doctorate by the University of Jena on April 6, 1824, which he had already sought in Würzburg, but which he had not received there.

In 1829 Heine handed over the institute to his nephew Bernhard Heine and moved to Holland. He bought houses in Brussels and The Hague to set up institutes. He set up a seaside resort between The Hague and Scheveningen . Heine recognized the value of medical baths - he added balneology to orthopedics .

When he tried to cure cholera with mustard flour baths , he again came into conflict with the local medical profession. The Dutch doctors also stopped sending him patients. 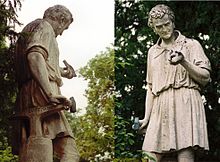 Heine received news from Bavaria that he was forbidden to practice orthopedics. He fell ill with dropsy and died on September 7, 1838 in Scheveningen. He was buried in Würzburg. There he was erected a large grave monument by Ernst Mayer in 1841 , which shows the orthopedic surgeon at work. In his home town of Lauterbach there is a memorial plaque that was attached to the church wall in 1971. There is also a Heinestrasse in Lauterbach.