Bernhard Franz Heine (born August 20, 1800 in Schramberg ( Black Forest ); † July 31, 1846 in Glockenthal near Thun / Switzerland ) was an instrument maker, bone specialist and orthopedist and inventor of the osteotome . 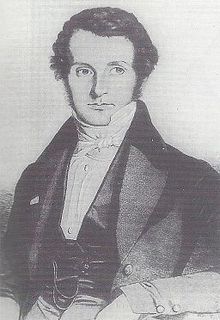 Years of apprenticeship in Würzburg

Bernhard Heine was born on August 20, 1800 as the son of a white tanner in Schramberg . At the age of ten (thirteen according to other sources) he was apprenticed to his uncle Johann Georg Heine in Würzburg as an instrument maker (specializing in orthopedic mechanics). Without matriculating , he later attended medical lectures at the Julius Maximilians University . After several trips, he took over his own department at the Karolinen Institute in 1822, of the orthopedic sanatorium Johann Georg Heines, became foreman in 1824 and took over the provisional management of the institute when the uncle moved to Holland in 1829. In 1835 he became the sole director of the institute.

Invention of the osteotome 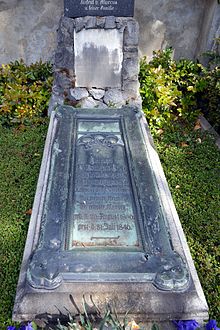 Grave in the main cemetery in Würzburg

In 1830, Bernard Heine gave the professional world a medical instrument that he had developed after years of research with the initial help of his cousin Joseph Heine . It was a bone saw, which he called an osteotome , and which was used to revolutionize surgical technology.

A dissertation on the osteotome and its application was published as early as 1836 and Heine traveled through Germany, France and Russia to present it to the medical profession. Heine turned down an offer from the Russian Tsar Nicholas to become orthopedic director of the imperial educational institution in Kronstadt and returned to Würzburg. The honorary doctorate already awarded by the university in 1836 became an honorary professorship for doctors without a final exam two years later.

In 1844 he was appointed extraordinary professor for experimental physiology in Würzburg.

Numerous other honors in German and European countries followed.

Bernhard Heine came up with findings that are still valid today about bone formation and bone regeneration (new formation of bones after injuries). Heine proved that the periosteum , the periosteum , where bone formation plays an important role and therefore to spare in the operation is. His early death prevented him from being able to publish his research results in a complete scientific work. With his research work and animal experiments, Bernhard Heine is one of the pioneers of systematic experiments in the natural sciences.

He had been teaching experimental physiology as an associate professor at the University of Würzburg since 1844 , but was soon unable to work due to tuberculosis and died while on vacation in Switzerland.

It was not until eighty years after his death (1926) that the research results were rediscovered and published.