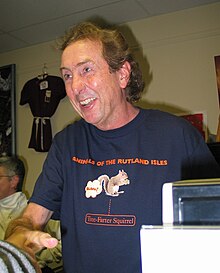 Unlike the other members of the Monty Python group, who preferred to write their skits in pairs ( Cleese / Chapman and Palin / Jones ), Idle wrote alone. His contributions often consisted of lengthy, complex monologues or catchy one-liners. One of the many Monty Python sketches from Idle's pen is the “Nudge Nudge Wink Wink” sketch (“Knick-Knack-Zwinker-Zwinker”).

His skills as a singer and composer helped him work for Monty Python as he wrote several of the songs that have appeared in the television series, films and sound recordings. Among these are "Eric the Half-a-Bee", "The Philosophers' Song" and, probably the most famous, "Always look on the Bright Side of Life", which he wrote for the final scene of The Life of Brian and the is sung in the film by a crowd of crucified Christians.

In the 1970s he was the author of the Monty Python "boks" (intentional misspelling of the English books ), and he wrote about his experiences with the comedian troupe in the fifth part of the 2003 book series "A Pocketful of Python" (a pocket full of Python), in which he also described some of his favorite sketches, written by both himself and the rest of the pythons.

On August 12, 2012, he performed in the closing ceremony of the Summer Olympics in London .

Activity as an author

Idle has authored several books, including two novels, Hello Sailor! (German title: Hallo Seemann! ) and The Road to Mars (German title: Die Reise zum Mars ). In 1976 he wrote an offshoot to Rutland Weekend Television , a television series produced by him for BBC 2 entitled The Rutland Dirty Weekend Book . In 1982 he wrote a play for the West End Theater in London entitled Pass The Butler and starring Willie Rushton .

He also wrote the story and co-wrote the music and lyrics for the musical Monty Python's Spamalot , based on the film Monty Python and the Holy Grail , which premiered on January 9, 2005 in Chicago before it hit Broadway in New York moved. There it won the Tony Award for Best Musical in the 2004-2005 season. The reactions of the other Monty Python members to the musical varied; both Michael Palin and Terry Jones publicly voiced their displeasure with the show because, in their opinion, it did not live up to the legacy and tradition of Monty Python.

In 2005 he was chosen as Comedian's Comedian (German about Komiker der Komiker) in Great Britain by other comedians and connoisseurs among the 50 best comedians of all time.

In October 2018 he published an autobiography (title: Always Look on the Bright Side of Life ).

In the 1995 discworld computer game Discworld , he gave his voice to the protagonist Rincewind . Also in the follow-up Discworld II - He was probably missing as its synchronization, he also composed and sang the title song That's Death .