Wellendingen is a municipality in Baden-Württemberg and belongs to the Rottweil district . 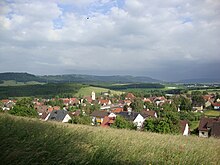 The community of Wellendingen is located in the southwestern Alb foreland at the foot of the Lemberg between Rottweil and Spaichingen .

The community borders in the west on Rottweil , in the northeast on Schömberg in the Zollernalbkreis , in the east on Deilingen , in the southeast on Gosheim and in the south on Frittlingen , all three in the district of Tuttlingen .

Wellendingen was first mentioned in a document in 1258. In the 13th century the place was the seat of a noble family of the same name, who were feudal people of the Counts of Hohenberg . In 1441 a church in Wellendingen was mentioned for the first time (a branch of the St. Pelagius parish in Rottweil's old town). In 1540 Wellendingen, which belonged to the Ifflinger von Granegg , was devastated in the Landenberg feud . From 1548 to 1608 Wellendingen was now owned by the Humpis von Waltrams family . The place, which belongs to the knight canton Neckar-Black Forest , was owned by the Barons of Freyberg from 1608/09 to 1805 . It was thus an incorporated village in the knightly canton of Neckar-Black Forest.

Coming from Tübingen, Johann Wolfgang von Goethe passed the place on one of his trips to Switzerland in 1797 . He is said to have dined at the Adler inn.

State sovereignty over Wellendingen came to Württemberg in 1805 . From then on, Wellendingen was part of the Kingdom of Württemberg, which had existed since 1806, in the newly founded Oberamt Rottweil . Thaddäus von Freyberg sold his Wellendingen goods and buildings to the Wellendingen community in 1824.

In 1871 the compulsory fire brigade was founded in Wellendingen, in 1911 the place was supplied with electric light.

In 1928 Wellendingen received a connection to the national route network through the Balingen – Rottweil railway line. On September 26, 1971, passenger traffic on the line between Schömberg and Rottweil was stopped and the line was officially shut down and dismantled. 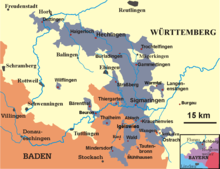 At the beginning of 1969, Wilfingen was assigned to the Rottweil district , thereby ending its status as an exclave.

The Catholic parish of St.Gallus in Wilflingen is still an exclave in the canonical sense. It is formally part of the Archdiocese of Freiburg, which includes the former Hohenzollern and Baden regions. In terms of pastoral care, however, it is looked after by the diocese of Rottenburg-Stuttgart and the parish in Wellendingen, which encompasses the states of Württemberg.

On January 1, 1974 Wilflingen was incorporated into the community of Wellendingen.

The free-standing, stately St. Ulrich Church is located in the center of Wellendingen. It was originally built in Gothic style and enlarged on the east side from 1863 to 1864 with a transept and a new rectangular choir. In 1937 part of the building was demolished and replaced by a new church.

The Wellendingen church was first mentioned in 1441 as a branch of the St. Pelagius parish in Rottweil's old town. A separate parish was established in the 16th century, around 1555 a capellanus (chaplain) Michael Burkatz is called.

The Protestant believers are parish in the parish of Rottweil in the church district of Tuttlingen of the Evangelical Church in Württemberg .

In April 2016, Mayor Thomas Albrecht was confirmed in office with 88.3% of the votes.

The coat of arms of the Lords of Wellendingen was a triangular and upturned shield, the upper half of which showed a "lion looking to the right". This old aristocratic coat of arms served the community as a template for the community coat of arms awarded to it in 1971 by the Ministry of the Interior of Baden-Württemberg , with the difference, however, that the heralds determined that the heraldic animal was not because it was "looking to the right" a lion, but a leopard. Today's silver municipal coat of arms shows a striding red leopard above a raised blue corrugated shield base: the municipality colors are red and white (silver) , as was once used by the Lords of Wellendingen .

Until 1970 the community of Wellendingen had a fir tree in its official seal. However, the Stuttgart Archive Directorate has determined that this is not a legally valid coat of arms of the municipality and has advised not to include the fir in a coat of arms that is to be approved in the future, as many firs already exist in other valid municipal coats of arms. As a result, the current coat of arms of the entire municipality was worked out.

The sights of the place include some ceilings of the Baroque style former Wellendingen Castle , which is now used as the town hall, and an epitaph in its entrance area. Further epitaphs are on the outside and inside of the St. Ulrich church.

Wellendingen is on the district roads 5545 and 5546 as well as on the state road 434, which branches off the federal road 14 at Aldingen- Neuhaus and runs to Schömberg.

Until the summer of 2010 there was a primary and secondary school in Wellendingen with a Werkrealschule, today there is a primary school , which has been called Neuwiesschule since summer 2010.

Secondary schools are mainly attended in Rottweil and Gosheim or Wehingen .

In Wellendingen there is also a municipal kindergarten with a branch in Wilflingen.

Son of the community

Wikisource: Wellendingen  - in the description of the Oberamt Rottweil from 1875

Cities and municipalities in the Rottweil district