Hahn's artistic training began with drawing lessons from the court painter Rudolf Oppenheim in Rudolstadt . Then (1887-1892) Hahn attended the Munich School of Applied Arts and the Munich Art Academy , where he was a student of Wilhelm von Rümann . Study trips to England, France, Belgium, Holland and Greece followed, as well as an extended stay in Italy. There he was particularly interested in the art of the early Italian Renaissance. He then settled in Munich and was appointed professor at the Munich Art Academy in 1902. In 1919 he was appointed an external member of the section for fine arts of the Prussian Academy of the Arts . In 1929 Hermann Hahn took part in the art exhibition in the Munich Glass Palace with the sculpture Höhenflug , which depicts a naked man.

Hermann Hahn was a member of the German Association of Artists . In 1913 he was awarded the Bavarian Maximilian Order for Science and Art .

Hahn became known early on for his realistic portrait sculpture, a form that never let go of him. But the neo-classical works of Adolf von Hildebrand also had a strong influence on him, and Hildebrand's writing The Problem of Form in Fine Art (1893) gave directional impulses to sculpture. Thanks to Hahn, Hildebrand's perspective was passed on to the following generation of sculptors and had a lasting impact on training at the Munich Academy. Hahn's students included Georg Brenninger , Theobald Hauck , Anton Hiller , Ludwig Kasper , Fritz Koelle , Fritz Nuss , Karl Romeis , Karl Roth , Emil Manz , Toni Stadler junior and Fritz Wrampe . 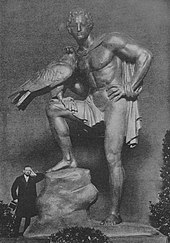 Goethe's Monument for Chicago, created for the Swabian Association there by Hermann Hahn (standing next to the monument) in Munich (1913) 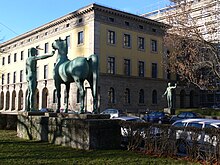