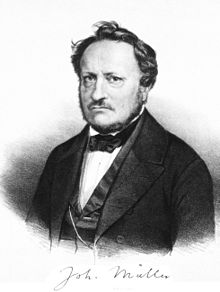 Johannes Müller Memorial on Jesuitenplatz in Koblenz (erected in 1899)

Müller statue by Richard Ohmann , above the main entrance to the Museum of Natural History in Berlin

Johannes Peter Müller (born July 14, 1801 in Koblenz , † April 28, 1858 in Berlin ) was a German physician, physiologist and comparative anatomist or zoologist as well as marine biologist and natural philosopher . He dealt primarily with nerve and sensory physiology, expanded the theory of reflexes and is considered the most important physiologist of the 19th century.

In his place of birth, Müller attended high school as a student of Joseph Görres . After finishing school, Müller served a year with the pioneers in Koblenz before enrolling at the Bonn University of Medicine in 1819 . There he was u. a. Student of the anatomist and physiologist August Franz Josef Karl Mayer .

While still a student he wrote a scientific paper on the breathing of the fetus, which was awarded by the university and appeared in print in 1823. Müller graduated with a doctorate in 1822 and moved to the University of Berlin , where he attended the lectures of the anatomist Karl Asmund Rudolphi (1771-1832). In 1824 Müller completed his habilitation in Bonn for physiology and comparative anatomy. In the same year he was elected a member of the Leopoldina . In 1826 he received the title of associate professor and in 1830 became a full professor. Already during his habilitation in 1826 his two extensive works On the comparative physiology of the sense of sight and On the fantastic facial phenomena were published . Despite a call to Freiburg, he stayed at Bonn University until 1833. Then he succeeded Rudolphi in Berlin. There he published his famous handbook of physiology from 1833 to 1840, which became a worldwide success. He conducted fundamental research on neurophysiology as well as anatomy and zoology.

In 1847 Müller was admitted to the Royal Society of Edinburgh as an Honorary Fellow . In 1849 he was elected to the American Academy of Arts and Sciences . In 1853 he received the Bavarian Maximilian Order for Science and Art and in 1854 the Copley Medal of the Royal Society in London and the Prix Cuvier of the Paris Academy.

In the last years of his life, Müller was repeatedly attacked by depression. On the morning of April 28, 1858, he was found dead in his Berlin apartment; his cause of death remained unknown. His student Rudolf Virchow gave the memorial speech at the funeral service on July 24, 1858 in the auditorium of the University of Berlin. Müller was buried in the St. Hedwigs cemetery in Berlin on Liesenstrasse . The tomb has not been preserved.

Ernst Haeckel continued the work published by Müller year of his death to describe the Strahlentierchen (radiolarians) continued.

Müller is considered one of the great natural philosophers of the 19th century. His main work "of epochal importance" is the manual of human physiology for lectures , two volumes in three parts (1833, 1834, 1840). Haeckel called him “the most important German biologist of the 19th century”. A history of zoology published in 1872 mentions him by name in the title: History of Zoology except for Joh. Müller and Charl. Darwin .

Müller also founded the research into the creatures floating in the sea, which he called buoyancy at the advice of Jacob Grimm (today called plankton at the suggestion of Victor Hensen ). In 1832 he made his first microscopic examinations. The scientific discipline of plankton research that emerged from this in 1846 on the then British island of Helgoland culminated in the establishment of the Royal Prussian Biological Institute on Helgoland , today's Biological Institute of Helgoland , with a school of marine biologists working in fauna . The plankton fishing gear used and further developed by Müller were crucial aids that brought a methodical paradigm shift in marine research , like diving in the bottle again later . He is the first to describe Radiolaria , a group of marine unicellular organisms that have microscopic skeletal structures. His description of the regularity of the skeletal structure of the acantharia subgroup later became known as Müller's law : “One obtains [..] for the acanthometry with 20 spines the same formula that there are 5 belts of spines between two spineless poles, each of 4 spines, all directed towards the common center of the whole sphere, and that the spines of each belt alternate with the preceding one. ”The larval form of the vortex worms occurring in plankton was named after its discovery by Müller's larva .

In 1826 he formulated the law of specific sensory energies , which expresses that every sense organ only reacts to stimuli of different quality in its own way. The eye reacts to pressure with a sensation of light ( see asterisks ). From this he drew the conclusion that the objective reality surrounding us could not be properly recognized or reflected. His Synapta work (1852), in which he interprets the emergence of snail larvae in an organ of a sea cucumber as a generation change (between two animal classes!) (Instead of as parasitism), which makes his view of the world clearly shaped by natural sciences untenable, can be regarded as a key work for this seemed to be. In the last instance he questioned the recognizability of the world in general. The philosopher Ludwig Feuerbach criticized this as physiological idealism . More recently, physiological idealism has been given a boost in the work of the biologists Humberto Maturana and Francisco Varela (see Autopoiesis ), who for their part strongly influenced contemporary philosophy and sociology (constructivism, postmodernism, systems theory).

Müller died the year before Charles Darwin's main work was published . The topic of the origin of the species was sometimes discussed beforehand; Müller's answer to a related question from Haeckel marks a widespread assessment at the time:

“Yes, we are faced with a lot of puzzles! We don't know anything about the origin of species! "(1854)

In addition to this work, he published the following works, among others:

After the death of JF Meckel (1781–1833) he published the archive for anatomy, physiology and scientific medicine , which is then mostly cited as Müller's archive .

His students and staff included: