Emil du Bois-Reymond, heliogravure of a photograph of a painting by Max Koner . 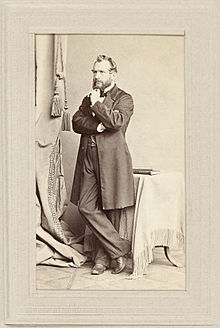 Emil Heinrich du Bois-Reymond (born November 7, 1818 in Berlin ; † December 26, 1896 there ) was a German physiologist and theoretical physician who is considered the founder of experimental electrophysiology and co-founder of physiology as a scientific discipline. He achieved particular fame through several high-profile speeches on science, philosophy and culture. In the second half of the 19th century he was one of the most respected personalities in the international scholarly world. In 1869/70 and 1882/83 he was rector of the University of Berlin .

Du Bois-Reymond belonged to a respected Huguenot family . His father, Félix Henri du Bois-Reymond (1782–1864), came from St. Sulpice near Neuchâtel in Switzerland, which was Prussian territory at the time. In Berlin he had worked his way up to government councilor and department head in the Prussian Foreign Ministry. His mother's family, Minette Henry (1798–1865), were among the oldest and most respected Huguenot families in Berlin. Her grandfather Daniel Chodowiecki was chairman of the Akademie der Künste zu Berlin, her mother Suzanne Henry-Chodowiecka was a painter and her father, Jean Henry (1761–1831), long-time director of the Kunstkammer and librarian of the Prussian royal family. Emil du Bois-Reymond's younger brother was the mathematician Paul du Bois-Reymond .

Emil Du Bois-Reymond received his higher education entrance qualification at the Berlin French Gymnasium in 1837 . He then devoted himself to studying theology , philosophy , mathematics and geology in Berlin and Bonn . In Berlin he came into contact with the anatomist and physiologist Johannes Müller (1801-1858). In 1839 du Bois-Reymond began studying medicine. He came to "animal electricity" in 1841 after his doctoral supervisor, Carlo Matteucci (1811 - 1868), had drawn his attention to a paper. Dealing with this topic was also due to his doctoral supervisor connected with the fact that du Bois-Reymond very consistently appropriated thorough experimental work as a research and knowledge method and mastered it with increasing confidence. He received his doctorate in 1843 with a paper on the views of the Greeks and Romans about electric fish .

In 1845 he was one of the founders of the Physical Society in Berlin, together with Ernst Wilhelm von Brücke and Heinrich Wilhelm Dove . A year later , du Bois-Reymond completed his habilitation with a thesis on the acidic reaction of muscle substance after her death . Between 1848 and 1884 he published the two volumes of his main work Investigations on Animal Electricity , divided into several parts.

In 1849 he became an assistant at the Berlin Museum of Anatomy and also a lecturer in anatomy at the Berlin Academy of the Arts. In 1851 he was elected a full member of the Royal Prussian Academy of Sciences in Berlin. From 1853 he was a corresponding member of the Accademia dei Lincei in Rome. In 1855 he received a professorship for physiology at the University of Berlin and in 1858 he succeeded Müller at the chair for physiology and as director of the Physiological Institute at the University of Berlin . In this capacity he became an appraiser in the context of the bars dispute . The question was whether the Swedish gymnastics according to Ling or the German gymnastics according to Jahn should be preferred for the preparation for the Prussian soldier. Du Bois-Reymond decided on German gymnastics because parallel bars expand the chest and are therefore preferable for endurance performance.

In his functions as Rector of the University of Berlin and as President of the Prussian Academy of Sciences, he positioned himself in a speech in 1870 that the use of science by the government would be justified: “We, the University of Berlin, we have our headquarters opposite the Royal Palace have, by virtue of the founding charter of this institution, are the spiritual bodyguards of the House of Hohenzollern. ”(Quoted from the English edition: A Speech on German War, London, 1870, p. 31.) In his work“ Omnipotent Government ”from 1944, the important criticized Liberal scholar and economist Ludwig von Mises this submission of free science to the power interests of the state with the words: “Let the example of Germany be a warning for us. German culture was doomed on the day of 1870 ... Where the universities become bodyguards and scholars are eager to join a "scientific front", the gates are wide open to the incursion of barbarism. "

In 1872 du Bois-Reymond gave his famous speech “On the limits of nature knowledge” to the 45th meeting of German naturalists and doctors in Leipzig (“ Ignoramus et ignorabimus ”). In 1869 he was one of the founding members of the Berlin Society for Anthropology, Ethnology and Prehistory . For his scientific achievements he was accepted on January 24, 1877 in the Prussian order Pour le Mérite for science and arts .

From 1877 du Bois-Reymond headed his own physiological institute.

In 1886 du Bois-Reymond was elected to the American Academy of Arts and Sciences , since 1892 he was a member of the National Academy of Sciences .

Memorial plaque on the house, Dorotheenstrasse 96, in Berlin-Mitte

Du Bois-Reymonds developed, constructed and refined several scientific instruments such as the galvanometer or the sled inductor for generating variable high voltages. In 1842 at the latest, he succeeded in proving "animal electricity". His main merit lies in the years of meticulous work, which is expressed by constant accuracy in the measurements and a great wealth of invention and skill in the construction of the measuring devices. With the electrocardiogram , the electroencephalogram and the electromyogram, Du Bois-Reymond's research led to a special branch of medical diagnostics .

Epistemology and Philosophy of Science

As early as the 1840s, du Bois-Reymond formulated the cornerstones of his scientific methodology. Together with his friends and colleagues Ernst Wilhelm von Brücke , Hermann von Helmholtz and Carl Ludwig , he represented clearly anti- vitalistic and materialistic- mechanistic positions. In doing so, he set an important limit for later scientific approaches to his work. Du Bois-Reymond was also a staunch advocate of Darwinism . With his “molecular theory” du Bois-Reymond accordingly developed a purely physical-mechanistic theory to explain electrophysiological measurements.

With the circle around the physiologists Brücke, Helmholtz and Ludwig he belonged from 1847 to the founders of modern physiology as a scientific discipline.

"Beyond the limits of knowledge of nature"

Stimulated by questions and research results in the field of contemporary brain research, Emil du Bois-Reymond gave a speech in 1872 “On the limits of the knowledge of nature”. In it, he addressed epistemological problems in connection with consciousness (this essentially means “phenomenal consciousness” as a qualitative experience, i.e. “ qualia ”) and free will. In this speech to the 45th meeting of the “Society of German Natural Scientists and Doctors” in Leipzig, the famous saying “ Ignoramus et ignorabimus ” (Latin: “We don't know and we will never know”), which is an ongoing heated debate , is also heard over the limits of the knowledge of nature, which is known as the "Ignorabimus Controversy". Emil du Bois-Reymond was considered a scientific spokesman in Germany and internationally at that time. His theses received special attention, even though they offered little new in terms of content and have been discussed in the philosophy of mind since ancient times .

Du Bois-Reymond equates “knowledge of nature” with the scientific methodology and this in turn with the mechanistic physics of his time. The eponymous closing words were:

“When faced with the riddles of the body world, the natural scientist has long been used to expressing his“ ignoramus ”with male renunciation. Looking back on the victorious course he has traversed, he is supported by the silent awareness that where he does not know now, at least under certain circumstances he could know, and one day perhaps will. In contrast to the riddle of what matter and force are, and how they are able to think, he has to make up his mind once and for all on the much more difficult proposition: "Ignorabimus". "

In this speech, Du Bois-Reymond doubted whether the ontological questions about the essence of the basic concepts of mechanics, matter and force, but also of consciousness, could ever be scientifically clarified. With this skeptical stance, he countered the idea, widespread among scientists at the time, that a positivistic and materialistic-Darwinian worldview could establish a complete worldview from which an ethic could be derived. At the same time, however, du Bois-Reymond also affirmed the value of natural science and the possibilities of gaining knowledge within its limits. His main argument is the criticism of a mechanistic or physicalistic reductionism , which necessarily emerges from the scientific way of working, but can never solve the qualia problem. According to du Bois-Reymond, “knowledge” within the framework of a reductionist mechanism is always just as limited as the basic possibilities of this approach to explaining the world itself.

Du Bois-Reymond's main concern in this debate was the establishment of an "epistemological truce" between science, religion and philosophy. In this respect, this speech was not a departure from the reductionist physicalism, which he vehemently advocated for years, but merely a criticism of the “monopoly of truth in mechanics”. A further controversy arose in connection with Ernst Haeckel, whose extensive, scientifically founded worldview claims and Goethe admiration du Bois-Reymonds attacked sharply in 1882 under the motto Goethe and no end and thus against his Berlin colleague Rudolf Virchow , who has been criticizing Haeckel for years had, posed. Haeckel popularized his view, among other things in Die Welträtsel .

In the 20th century, criticism of "ignorance" was expressed in particular by mathematician David Hilbert , physicist Ernst Mach and the Vienna Circle .

Eight years later, du Bois-Reymond took up the heated discussion with another speech entitled “The Seven World Riddles”, in which he saw the question of the nature of the most important scientific terms in the context of scientific knowledge as unanswerable.

In this context, Ernst Haeckel's attempt to answer these questions within the framework of a monistic Darwinism became known.

Du Bois-Reymond sees natural science as the “absolute organ of culture” and the only human endeavor that moves forward. Hence the history of natural science constitutes the very history of humanity. For du Bois-Reymond, this glorification of science goes hand in hand with a pessimistic and negative attitude towards other cultural goods such as politics, art and religion.

Since 1999, the German Physiological Society has awarded the du Bois-Reymond Prize annually to a young scientist in the field of physiology.