The Vienna Circle of Logical Empiricism was a group of intellectuals from the fields of philosophy , natural sciences , social sciences , mathematics and logic who met regularly in Vienna from 1924 to 1936 under the direction of Moritz Schlick . 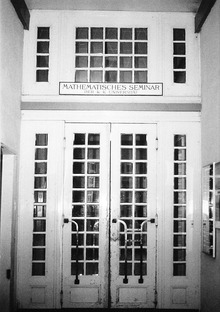 Entrance door of the Mathematical Seminar of the University of Vienna , Boltzmanngasse. Meeting point of the Vienna Circle.

The philosophical position of the Vienna Circle was called Logical Empiricism , Logical Positivism, or Neopositivism . It was influenced by Ernst Mach , David Hilbert , French conventionalism ( Henri Poincaré and Pierre Duhem ), Gottlob Frege , Bertrand Russell and Ludwig Wittgenstein . There was a pluralism of philosophical positions within the Vienna Circle . The participants, however, combined the attempt to make philosophy more scientific with the means of modern logic and a commitment to the values ​​of the Enlightenment . The predominant topics were the fundamental debates in the natural and social sciences, mathematics and logic, the actualization of empiricism through modern logic, the search for an "empirical criterion of meaning ", the criticism of metaphysics and the connection of the sciences in the context of an encyclopedia of " Unified Science ".

The Vienna Circle made its public appearance through the publication of several series of works (the book-rich writings on the scientific world view , unified science , the journal Knowledge ) and the organization of international conferences (including in Prague , Königsberg , Paris , Copenhagen , Cambridge , UK and Cambridge , Mass. ). As part of the Ernst Mach Association , members of the Vienna Circle were also active in popular education.

In the course of Austrofascism and the later seizure of power by the National Socialists , many members of the Vienna Circle were forced to emigrate . The murder of Schlick in 1936 by a former doctoral student marked the de facto end of the Vienna Circle.

The works that arose in the area of ​​the Vienna Circle had a great influence on the development of the philosophy of science and analytical philosophy up to the present.

The history and development of the Vienna Circle can be divided into several phases:

Even before the First World War , there was an informal discussion round which the later Vienna Circle members Hans Hahn , Philipp Frank and Otto Neurath met. Among other things, fundamental problems of modern mathematics and natural sciences, the (in) scientific nature of philosophy and the renewal of empiricism in connection with French conventionalism and the means of modern logic were discussed . Authors such as Mach , Duhem , Poincaré , Brentano , Meinong , Husserl , Freud , Russell , Whitehead , Lenin and Frege were treated . The First World War ended this first phase at the latest.

The constitution of the Vienna Circle began in 1921 when Hans Hahn returned to Vienna. Together with the mathematician Kurt Reidemeister, Hahn organized seminars on Ludwig Wittgenstein's Tractatus logico-philosophicus and on the Principia Mathematica by Whitehead and Russell. In 1922, with Hahn's support, Moritz Schlick was appointed to the Chair of Natural Philosophy in Vienna, which Ernst Mach had held before him and which Ludwig Boltzmann had also taught at times .

Immediately after his arrival, Schlick organized joint discussion groups with the mathematicians working with Hahn. From the winter semester 1924/1925 onwards, a Thursday evening "evening group" was set up at the suggestion of Schlick's students, Friedrich Waismann and Herbert Feigl , to which Schlick personally invited people to the Mathematical Institute at Boltzmanngasse 5 in Vienna . These meetings can be seen as the “hour of birth” of the later “Vienna Circle”.

The weekly interdisciplinary discussion rounds, which have existed since 1924, were made up of different participants: established researchers, younger lecturers as well as students and doctoral candidates took part. There were also invited guests from abroad.

In 1926 Rudolf Carnap was brought to Vienna as a private lecturer at Schlick's instigation. Carnap's logical structure of the world was discussed intensively in the circle.

In addition, Wittgenstein's Tractatus logico-philosophicus was read aloud and debated. In addition, there had been personal contacts with Wittgenstein since 1927 and meetings with Schlick, Waismann, Carnap and Feigl took place.

In 1929 the Vienna Circle came under this name for the first time - the name comes from Otto Neurath - with the program publication Scientific World Conception. The Vienna Circle . This manifesto was presented on the occasion of the "Conference for the Epistemology of Exact Sciences" held in Prague in autumn 1929. This conference, which was jointly organized by the Ernst Mach Association and the Berlin Society for Empirical Philosophy , was the first international appearance of the logical empiricists and the first of a series of international conferences organized by members of the Vienna Circle. Further conferences followed, which continued into the years of emigration: 1930 in Königsberg, 1934 in Prague, 1935 in Paris, 1936 in Copenhagen, 1938 in Cambridge (England), 1939 in Cambridge (USA) and 1941 in Chicago.

In 1930 the Vienna Circle and the Berlin Group also took over the journal Annalen der Philosophie and continued it as the central publication platform for logical empiricism under the title Knowledge , edited by Carnap and Reichenbach. The publication activities of the Vienna Circle were supplemented by the book series Schriften zur Scientific Weltaufführung (published by Schlick and Frank, 1928–1937), Unified Science (published by Neurath, 1933–1939), and later - already in emigration - the International Encyclopedia of Unified Science (with Neurath as editor-in-chief, Carnap and Charles W. Morris as editor-in-chief, from 1938 to 1970 in total).

For political, ideological and racist reasons, the first signs of disintegration began to appear in the early 1930s : Herbert Feigl left Austria in 1930, Carnap was appointed to Prague in 1931 and went to Chicago in 1935.

The year 1934 marked a turning point: Hahn died of the consequences of an operation, Neurath had to emigrate to Holland in connection with Austrofascism and the Ernst Mach association in Vienna was dissolved by the Schuschnigg regime.

The actual end of the Vienna Circle came with the murder of Schlick by his former doctoral student Hans Nelböck out of personal and ideological opposition.

After that, sporadic meetings were held with Kraft, Waismann, Zilsel, Menger and Gomperz . The "annexation" of Austria to Nazi Germany meant the final disappearance of the Vienna Circle from Austria.

The internationalization of logical empiricism went hand in hand with emigration . Many former members emigrated to the Anglo-American region and influenced the further development of the philosophy of science there . The Unity of Science movement, which was mainly supported by Neurath, Carnap and Morris and aimed at establishing an International Encyclopedia of Unified Science , which played a key role in the organization of the above-mentioned congresses and published the International Encyclopedia of Unified Science, is also indicative of internationalization .

The members of the Vienna Circle at a glance

Apart from the central protagonists of the Schlick Circle, the attribution to the Vienna Circle is open in many cases. The division into "members" and "authors close to the Vienna Circle" in the program publication from 1929 is a "snapshot". Depending on the criteria used (frequency of the visit, content-related proximity), different allocations to the core or environment of the district can result. In the following list (in alphabetical order) the “core” was determined according to the criterion of the frequency of participation in the Schlick circle. In the "periphery" there are occasional visitors, foreign guests and intellectual reference figures of the district:

The Vienna Circle cannot be tied to a philosophical position. On the one hand there were many different positions within the circle, on the other hand the positions of individual members changed fundamentally again and again. Nevertheless, some central issues and debates can be identified.

Verificationism and empirical criterion of meaning