Friedrich Gustav Jakob Henle (born July 19, 1809 in Fürth ; † May 13, 1885 in Göttingen ) was a German anatomist and pathologist . As an expert at the microscope, he discovered Henle's loops, which were later named after him, in the kidney . In his handbook of systematic human anatomy , the first description of dividing cell nuclei can be found, albeit without their interpretation. 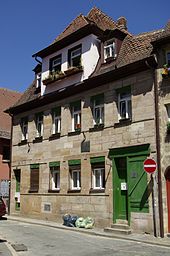 Henle was born in Fürth in 1809 as the son of a respected Jewish merchant family, his uncle was the merchant Elkan Henle . Because of the lack of development opportunities for Jewish children in Bavaria , the family moved to the Rhineland. Jakob Henle studied from 1827 in Bonn and, among other things, with the physiologist Johannes Müller , in Heidelberg medicine. With Müller he also researched in the field of comparative anatomy in the Jardin des Plantes .

After receiving his doctorate in 1832 he became an assistant, passed his state examination in 1832/33 and became a prosector in the Institute for Anatomy and Physiologist in Berlin in 1834 under Johannes Müller, who had left Bonn . However, because of his participation in the fraternity movement in Bonn, he was first detained in the Berlin house bailiff, sentenced to six years in prison, but pardoned with the help of Alexander von Humboldt . Henle completed his habilitation in 1838 , then worked as a lecturer, and in 1840 was appointed professor of anatomy and physiology at the University of Zurich . He gave a lecture there on tissue theory. He was considered a master at the microscope and decisively advanced the young science of histology .

In 1844 he was offered the second full chair for anatomy and physiology at the University of Heidelberg . He was promised that he would be able to take over the chair of his colleague Friedrich Tiedemann as soon as he retired. There were always great tensions and insults between Henle and Tiedemann, which even the Ministry of the Interior had to intervene in 1849 when it came to planning a new anatomy building. Henle's Handbook of Rational Pathology was created in Heidelberg , where he held the famous anthropological college in 1848 , which impressed one of his listeners, the Swiss poet Gottfried Keller , so much that he described it in his novel The Green Heinrich . With the novella Regine , Keller also set a literary monument to Henle's first wife, Elise Egloff . In 1849 Henle took over the directorate of the anatomical institute.

Henle then took over the management of the Institute for Anatomy at the University of Göttingen in 1852 . He lived, researched and taught there until his death in 1885. In 1853 he was elected a full member of the Göttingen Academy of Sciences . In 1855 he completed the first volume of his famous work Handbuch der Systematic Anatomie des Menschen , the anatomical illustrations of which are based primarily on the preparatory work of his assistant Ludwik Teichmann , who also worked for the Viennese anatomist Josef Hyrtl . In 1858 he was elected a member of the Leopoldina .

Henle also made a decisive contribution to the anatomy, histology and pathology of the adrenal cortex through the development of staining with chromic acid potassium solution in 1865.

Henle coined the terms contagium vivum and contagium animatum and thus also the theory of microorganisms as the cause of infectious diseases. Accordingly, the basic rules for defining a pathogen, the Henle-Koch postulates , are named after him and his student Robert Koch .

His son A. Henle became a surgeon and professor at the University of Breslau and later chief physician at the Luisenhospital in Dortmund.

A memorial plaque was attached to Jakob Henle's former home in Göttingen before 1888, but was removed in 1942 during the Nazi era because of his Jewish origins. After the war the memorial plaque was re-attached. There is also a memorial plaque at the house where Henles was born at Helmstrasse 9 in Fürth. The anatomical institute in Heidelberg honors Henle with a bust on the first floor in front of the dissecting room. The medical faculty of the University of Göttingen awards him the Jacob Henle Medal every year . A medical center in Lünen is called Jakob Henle Haus , as is a dialysis center in Fürth , which also houses the Fürth Dialysis Museum.