Friedrich Myconius in a contemporary representation

Friedrich Myconius (actually Friedrich Mecum ; born December 26, 1490 in Lichtenfels , † April 7, 1546 in Gotha ) was a Lutheran theologian and reformer from Gotha.

Raised in the deep religiosity of the Middle Ages, Myconius (this is the Greek form of his surname Mecum) first attended the city school in Lichtenfels. At the request of his parents, he switched to the Latin school in Annaberg in 1503 . At an encounter with Johann Tetzel , who at the time was the sub-commissioner of the jubilation for the Teutonic Order in Livonia , he demanded a free indulgence. However, Tetzel refused the request. The rector of the Latin school then advised him to enter the Franciscan monastery , which belonged to the Saxon Franciscan Province ( Saxonia ), which he did on July 14, 1510. The next day he dreamed that the apostle Paul was leading him out of the wilderness to Christ. He then studied the scholastic teaching intensively. After a transfer to Weimar , Myconius was ordained a priest in 1516. In the presence of Duke Johann the Steadfast and his son Johann Friedrich , he gave his first sermon at Pentecost that same year. His inner theological struggle was ended by the visit of Martin Luther in 1518. Enthusiastic about his ideas, his sermons became increasingly sharp and aroused the displeasure of his friars. He was suspected of heresy and monitored. He was sent to Eisenach in 1522 and from there to Leipzig ; then he was brought to Annaberg in 1524 as a prisoner of the anti-Lutheran Duke Georg .

There he escaped captivity by fleeing to the Electorate of Saxony. At Easter he preached in Zwickau and in July in Buchholz , where he received a large number of visitors from the neighboring congregations. In August 1524, Duke Johann gave him a preaching position in Gotha . There the conditions in the church and school system were disorganized by the Gotha Pfaffensturm . Myconius set about arranging them and issued church and school regulations. On December 21, 1524 he founded the Gothaer Gymnasium in the Augustinian monastery , which still exists as the Ernestinum Gymnasium. During the Peasants' War he was able to prevent damage in Gotha by confronting the peasants. In spite of all this he stayed out of the political affairs of the Peasant War and received help from Martin Luther and Philipp Melanchthon , who contacted him in writing. 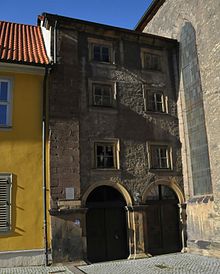 Its importance increased when he accompanied the future Elector Johann Friedrich von Sachsen in 1526/27 as a preacher to Cologne and Düsseldorf , the capital of Jülich-Kleve-Berg . Johann Friedrich married Sibylle von Jülich-Kleve-Berg there . On the way through, he gave the first documented evangelical sermon in Paderborn in the episcopal city. On his third trip with Johann Friedrich, Myconius preached in the Düsseldorf Palace . The Franciscan observant Johann Heller von Korbach contradicted him in a sermon in the collegiate church of St. Lambertus . Probably in an inn on the Düsseldorf market - at the suggestion of the Electoral Saxon councilor Anarg von Wildenfels - a public disputation took place between the two , the Düsseldorf religious discussion on February 19, 1527, which neither the duke nor the duchess, but Konrad Heresbach and other ducal councilors attended . A written account of the dispute was probably printed by Myconius himself in the writing Action and Disputation ; Heller published a reply.

On Luther's initiative, visitations of the church districts were carried out in the Saxon Kurlanden , in which Myconius participated in 1526 in the office of Tenneberg and in 1528/29 in the offices of Eisenach , Gotha and Weimar . He also took part in the Marburg Religious Discussion in 1529, in the Wittenberg Agreement in 1536 and in the assembly in Schmalkalden in 1537. His work as a reformer took him to England in 1538 , where he negotiated the Confessio Augustana with the theologians of Henry VIII . However, this was not crowned with success and he returned to Saxony six months later. There, the introduction of the Reformation in Annaberg was more successful and together with Caspar Cruciger the Elder he worked on the introduction in the Duchy of Saxony. He also took part in the negotiations in Frankfurt am Main and Nuremberg in 1539 and the Hagenau Religious Discussion in 1540. His constant exertion was affecting his body. As early as 1539 he had a tracheal disease due to consumption . This stole his voice so that he could no longer preach. After he could no longer articulate himself vocal, he devoted himself to the composition of writings. Many personal experiences flowed into his Historia reformationis . After his illness worsened, he died on April 7, 1546 in Gotha.

Myconius lived in a house attached to the Augustinian Church ; Today it is the oldest still preserved residential building in Gotha. The state regular school "Friedrich Myconius" , which existed until 2016 and is located right next to the former Augustinian monastery, reminded him by name . The square behind the Augustinian Church was named Myconiusplatz as early as the middle of the 19th century.

The City of Gotha has awarded the Myconius Medal every year since 1997 for special voluntary commitment in social, cultural, economic or ecological areas. Since 2002, the medal has been endowed with an additional 1,500 euros. After the honorary citizenship, the Myconius Medal is the highest honor in the city.

Myconius' tombstone was moved to the Augustinian Church after the old Gottesackers was abolished in 1874, where it is set into the wall to the right of the altar. The first part of his inscription, written by Johannes Stigel , is in Greek, the second in Latin. The translation from the Greek reads: “Here earth has hidden the capable Thuringian Friedrich Myconius, who was a Franconian by origin. He lit the light of the gospel for the Gotha people, and godly he lived eleven Olympiads and the rest. ”The second, Latin part translates as:“ This stone covers the pious bones of Myconius, under whose guidance, Gotha, you the grace of Christ was shown. Through teaching and living, he has left you an example. Regard this, Gotha, as a great honor. "