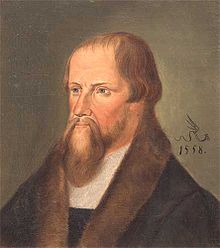 Scene with Caspar Cruciger, Martin Luther, Philipp Melanchthon and others; Relief on the Berlin Cathedral

Caspar Cruciger was born on January 1, 1504 in Leipzig as the son of the merchant Georg Kreuziger († June 28, 1544 in Leipzig), who came from a Bohemian family and maintained the Hussite traditions. His father Georg had acquired citizenship in Leipzig in 1502 and then came to a certain degree of prosperity. That is why the young Caspar Cruciger was able to enjoy a humanistic training with Georg Helt (from Forchheim, therefore called Forchemius ) and Kaspar Börner at the Thomas School in Leipzig from an early age . On October 19, 1513 he became a student at the University of Leipzig , where he became a student of the Englishman Richard Croke and Petrus Mosellanus . As a student with Georg Helt, he attended the Leipzig disputation between Martin Luther and Johannes Eck .

After the outbreak of the plague in Leipzig in 1521, Cruciger moved to Wittenberg . Here he continued his theology studies and expanded it to include Hebrew until he returned to Leipzig in 1522. In the following year, on April 13, 1523, he was re- enrolled in Wittenberg . There his interests expanded to include the natural sciences; so he laid out a botanical garden in 1524. His mathematical and astronomical studies with Erasmus Reinhold brought him recognition and promoted the implementation of the Copernican worldview .

In December 1524 Philipp Melanchthon proposed to entrust him with the "Lectio Quintiliana" at the philosophical faculty. In 1525 he was appointed rector and preacher of the newly founded Protestant Johannisschule in Magdeburg , which flourished under his leadership. On November 17, 1528 Cruciger received a professorship for theology and the associated preacher position in the Wittenberg Castle Church .

He first into the philosophical faculty and took over theological lectures, he that on 17 June 1533 to the doctor of theology doctorate was and was appointed in the same year as professor of theology at Wittenberg. From now on he continued his work primarily in Wittenberg at Luther's side and helped him with the translation and preparation of the Bible for printing . This changed only with his participation and that of Friedrich Myconius in the Reformation movement in Leipzig in the summer of 1539. Then you can find him at the Hagenau Religious Discussions , the Worms Religious Discussions (1541) and the Regensburg Religious Discussions , where he provided important services as secretary through notes and negotiations.

Regarding Cruciger's family circumstances, it can be said that he married the former nun Elisabeth von Meseritz in the summer of 1524 . From this marriage came the daughter Elisabeth, who married Luther's son Johannes in the second marriage, as well as the son Caspar Cruciger the Younger , who took over his chair at the Wittenberg University after Melanchthon's death, whose son was the theologian Georg Cruciger . On April 24, 1536, Cruciger married Apollina († September 28, 1557), the daughter of the Leipzig councilor Kunz Günterode and his wife Anna Alpeck († 1541) at Eilenburg Castle . Martin Luther gave the wedding sermon . From this marriage, the daughter Apollonia is known, who married the poet Georg Mauritius on June 6, 1569 .

The cities of Magdeburg and Leipzig named a street in his honor ( Crucigerstraße and Creuzigerstraße ) and there is a memorial plaque in Lutherstadt Wittenberg .