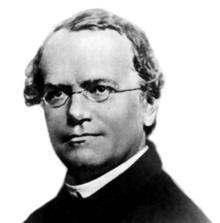 The Mendelian rules describe the inheritance process in characteristics , their characteristics of only one gene is determined ( monogenic inheritance ). They are named after their discoverer Gregor Mendel , who published them in 1866, but initially hardly noticed and only "rediscovered" in 1900, long after his death.

Mendel's rules only apply to living beings in which diploid and haploid stages (with two or one set of chromosomes in the cell nucleus ) alternate in the course of sexual reproduction (see nuclear phase change ). Corresponding rules can be derived for organisms with a higher degree of ploidy ( polyploidy ). However, many traits are inherited polygenically through the interaction of several genes.

The alternative designation Mendel's Laws has become uncommon, as various genetic phenomena were soon discovered in which an inheritance can deviate from the "rules". Examples of non-Mendelian inheritance are gene coupling , extrachromosomal inheritance , non-random segregation of chromosomes and the meiotic drive .

Mendel's rules were recognized by the Augustinian monk and assistant teacher Gregor Mendel in the early 1860s and confirmed by cross-breeding experiments on pea plants. In 1865 he reported on it in two lectures at the Natural Research Association in Brno , and in 1866 a printed publication followed, which for a long time had received little attention.

Mendel discovered principles that others had not seen before and for decades afterwards. The success of his studies on pea plants can be explained in retrospect with the following factors:

In particular, the restriction to individual characteristics was in contrast to the prevailing ideas at the time, according to which the entire parental organism influences the characteristics of the offspring and this is mediated by a liquid (in humans the blood). Accordingly, the offspring were viewed as mixed race or hybrids and categorized as such.

Characteristics selected by Mendel for his experiments with pea plants

Mendel selected seven traits and crossed each purebred plants that were found in one of these traits, e.g. B. the flower color, differentiated. He found that all descendants of the first generation had only one expression of the respective trait, e.g. B. purple flowers. If he then crossed plants of this generation with one another again, the missing trait (white flowers) reappeared in the second daughter generation, in a quarter of the offspring. Mendel found this 3: 1 ratio in all seven investigated cases, and he was able to confirm it statistically through a large number of experiments. To explain this, he introduced the terms dominance and recessivity : the dominant violet color hid the recessive white in the first generation, but this reappeared in the second generation. From these observations Mendel concluded that every plant has the "genetic factor" for the flower color or another characteristic in duplicate. This assumption was confirmed by backcrossing experiments with white-flowered plants in which either only violet-flowered daughter plants appeared or both flower colors in equal parts, whereby the violet-flowered mother plant turned out to be pure or mixed.

During cross-breeding experiments in the 1880s, the Dutch botanist Hugo de Vries came to the conclusion that the previous holistic explanatory approach was wrong and that one had to investigate the inheritance of individual characteristics instead. In numerous series of tests with many different plant species, which he evaluated quantitatively, he found, like Mendel, a split in the ratio of 3: 1. In a publication with the title The Splitting Law of the Bastards in 1900 he called for “a complete conversion of views” and took up Mendel's work on peas, the results of which he described as generally valid. At the same time, the German botanist Carl Correns began corresponding experiments in 1894, the results of which he published in 1900 with reference to Mendel. For a long time, the Austrian plant breeder Erich Tschermak was Mendel's third “rediscoverer” in the same year ; however, he has doubts as to whether he correctly understood Mendel's results at the time. In the meantime, the chromosomes and their distribution to the offspring had been described, so that Mendelian rules could now be combined with these observations to form the chromosome theory of inheritance .

Mendel's rules refer to traits that are determined by a single gene . Each gene is in the diploid core phase in two copies (“ alleles ”), one of which comes from each parent. In the Metazoa ( multicellular animals including humans) the diploid phase comprises all cells with the exception of the gametes ( egg cell and sperm ). Plants , on the other hand, show an alternation of diploid and haploid generations, whereby in "higher" plants the diploid generation comes to the fore and the haploid phase is greatly reduced in the seed plants ( embryo sac and pollen grain ). Mendel and his "rediscoverers" studied the characteristics of diploid plants.

Intermediate inheritance: P = parent generation. F1 = first daughter generation: all plants have the same genotype and the phenotype has a weaker flower color.

If two individuals are crossed with one another who differ in one trait for which they are both homozygous (pure breeding), then the offspring of the first generation (daughter generation F 1 ) are uniform, i. H. equal to the examined feature. This rule of uniformity or reciprocity applies both to the phenotype and to the genotype , which is heterozygous (mixed herbalism) in all individuals of the F 1 generation .

For the expression of the characteristic, one of three possibilities occurs depending on its inheritance :

Exceptions to rule 1 can occur if the gene for an examined trait is on a sex chromosome ( gonosome ). Then it may be that the F 1 generation is not uniform.

The rule of division or segregation applies when two individuals are crossed who are both heterozygous in the same way, e.g. B. two plants that have genes for the flower color "white" and "red". That could be the F 1 generation from the previous section. In descriptions of the Mendelian rules, the offspring of such a heterozygote cross are therefore referred to as grandchildren or second generation of branches (F 2 ). The offspring from this mating are no longer uniform with one another, but split up in terms of both genotype and phenotype. 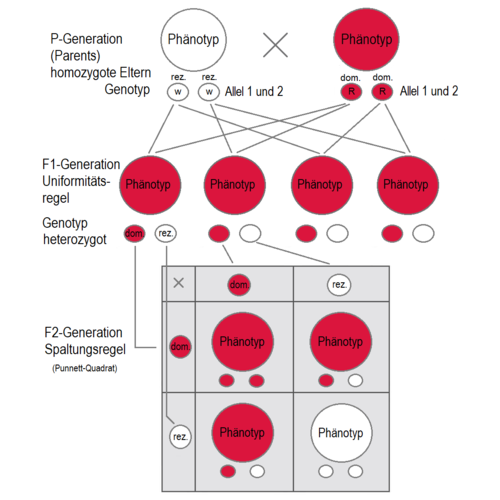 1st + 2nd rule in dominant-recessive inheritance , such as B. occurs in the flower color of the pea plant.
Parent generation P, each with pure inheritance for white (w / w) and red (R / R).
F 1 generation: All individuals look the same. Even in the mixed hereditary specimens, the dominant hereditary predisposition is sufficient for the formation of the red flower pigment on only one allele in order to achieve the full expression of the red-blooded trait, although the other allele knows the hereditary disposition, i.e. contains the absence of the flower pigment.
F 2 generation: dominant ( red ) and recessive (white) manifestations show a ratio of 3: 1.
The first inheritance step from the P generation to the F 1 generation is shown here in a different inheritance scheme than the inheritance from the F 1 to the F 2 generation that follows . The lower one is a Punnett square

1st + 2nd rule in the intermediate inheritance , as z. B. occurs in the flower color of the miracle flower ( Mirabilis jalapa ).
Parent generation P, each with pure inheritance for white (w / w) and pink-red (r / r).
F 1 generation: All individuals look the same. The “ red ” and “white” genes of the mixed- inheritance plants result in a pink flower color.
F 2 generation. Red , pink, and white flower colors occur with a 1: 2: 1 ratio.

For deviations from the split rule, however, see: Non-random segregation of chromosomes .

The rule of independence or recombination rule describes the inheritance of two observed characteristics ( dihybrid inheritance ) which are present at the same time when pure-bred individuals and their offspring are crossed. Both traits are inherited independently (hence the name of the rule), as the genes are on different chromosomes, with new, inherited combinations appearing from the F 2 generation onwards .

Example in the adjacent inheritance scheme: P-Generation: Each parent animal has one dominant and one recessive trait, each genetically ( homozygous ). Q 1 : According to the rule of uniformity, all individuals in genotype and phenotype are identical and mixed ( heterozygous ). They shape the dominant characteristics in the phenotype. Q 2 : Now all allele combinations are possible. The characteristics are inherited independently of one another so that new combinations can occur. Average numerical ratio of the phenotypes 9: 3: 3: 1 In this example in the F 2 generation: 9 fully pigmented with short, 3 fully pigmented cats with long fur and 3 white piebald cats with short fur, and one white piebald cat with long fur created by recombining the two recessive features. The split rule and the rule of independence are consistent with the chromosome theory of inheritance. 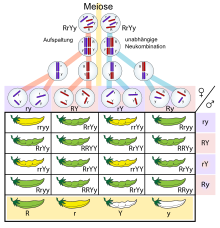 However, the independence rule applies only if the of the characteristics responsible genes on different chromosomes are represented by the meiosis are separated, or when they are away from each other on the same chromosome so far that they during meiosis by crossing-over are regularly inherited separately from each other. If genes are close together on the same chromosome, they are inherited in linkage groups .

The two characteristics shown here as examples are dominant-recessive inheritance patterns. However, if one or both traits are inherited as an intermediate, the phenotypes are not developed in a ratio of 9: 3: 3: 1. In the genotype, the numerical proportions remain the same for all hereditary forms. All relationships can easily be determined by calculating the above matrix ( Punnett's square ). 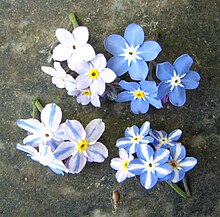 F2 using forget-me-not as an example