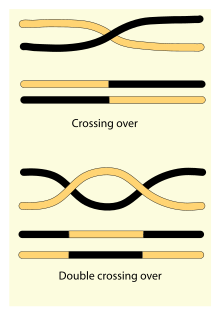 Schematic representation of a simple crossover and a double crossover

This occurs quite frequently between paternal and maternal chromatids in a meiosis ( meiosis ) and leads to new combinations of genetic information. Here, after strand breaks in the DNA molecules in so-called recombination nodes, there is mutual pairing of complementary single strands, with cross-overlapping also occurring. The microscopically visible result is the chiasm .

A crossover is of at pitches nucleus during prophase of meiosis I take. This is not a case of faulty DNA repair , but a process, the process of which in the cell nucleus is facilitated in a well-organized manner by the structures formed for this purpose - the synaptonemal complex . During the first meiotic division in the zygotene of the prophase, the chromatids of a homologous chromosome pair come together parallel to one another , which in the subsequent stage, the pachytan , enables a crossing-over between sections of non- sister chromatids corresponding to each other according to gene loci . This allows parts of the maternal and paternal chromosomes to be swapped, creating new combinations ( intrachromosomal recombination ). In the following stage, the chromosomes solve each other again, and previously occurred crossover are now in Diplotene also light microscopy as Chiasmata visible.

In addition, in the following second meiotic division ( meiosis II ), new combinations ( interchromosomal recombination ) arise from the new distribution of the parental chromatids as a whole in the single chromosome set of the sex cells ( gametes ).

The concept of crossing-over is not synonymous with that of crossing , as used in the breeding of animals and plants for the mating of individuals with different characteristics.

Schematic representation of the genetic recombination through crossing-over in meiosis

Before meiosis , the DNA is normally doubled so that all chromosomes are present with two chromatids . During meiosis, in prophase I the two homologous chromosomes, i.e. the corresponding maternal and paternal chromosomes, attach to each other: the synaptonemal complex is formed between them . The phase of attachment is called zygotene, the subsequent phase of mating is called pachytan. The resulting structure is called bivalent (since there are two chromosomes) or tetrad (since there are four chromatids).

Schematic representation of a Holliday structure

The breaks in the chromosomes are doing ( "crosswise" English crossing over , crossover ' compound). This is why whole chromosome areas are exchanged between two chromosomes. The single strands of DNA are separated and so-called Holliday structures are formed .

In the further course of meiosis, the newly combined homologous two-chromatid chromosomes shorten and diverge in the direction of the cell poles because they migrate there along the spindle apparatus . If a crossing-over has taken place, the chromatids remain attached to each other a little longer at the points of the still fused area, which can be observed in the light microscope as a chiasma - a figure similar to the Greek Chi "χ". Mosaic chromatids are formed that contain both paternal and maternal genetic material.

The crossing-over is the prerequisite for the intrachromosomal recombination and ensures that new combinations of characteristics arise in the sexually reproducing organisms.

Inadequate crossing-over leads to an unequal exchange between two chromatids: one part is lost ( deletion ), which is added to the other ( insertion ).

If two very similar but not homologous sequences lie next to one another during the formation of tetrads - for example in the case of paralogous genes or transposons or satellite DNA - a crossing-over can occur, as a result of which sections are exchanged that do not correspond to one another: non-homologous or inadequate crossover. After such an unequal exchange, corresponding portions ( deletion ) are missing on one strand , which are represented twice on the other strand ( insertion or duplication).

Inadequate crossing-over can occur in paired chromatids during meiosis , and occasionally also in asexual reproduction with mitotic nuclear divisions. Inappropriate crossover events are, on the one hand, accidents; Both deletions and insertions can lead to diseases such as Huntington's disease . On the other hand, cases of inequitable crossover with gene duplication represent an important source for the evolution of gene families .