An XX man is an individual who has a male appearance ( phenotype ) even though he has an XX karyotype ( De la Chapelle syndrome ). This means that both sex chromosomes are X chromosomes , while the Y chromosome , which is normally required for the development of the male phenotype, is missing. The frequency of occurrence is given as 1: 10,000 to 1: 20,000, while Klinefelter's syndrome , which is similar in terms of external features, is about ten times as common. Up to puberty and usually beyond that, there is inconspicuous social gender development . As with the here not present aneuploidy can not here speak of a disease, but only by a hormonally induced specific phenotypic expression. 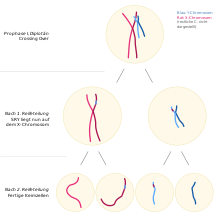 Hypothetical development of the syndrome: Through crossing-over during prophase I of meiosis , the SRY moves from the Y to the X chromosome. 2 of the 4 germ cells are affected by this effect.

The cause of this form of sexual differentiation has not yet been conclusively clarified. Among other things, a translocation of the sex determining region of Y (SRY) from the short arm of the Y chromosome to the short arm of the X chromosome is assumed during male meiosis , i.e. when the father produces sperm . The latter gives rise to four male germ cells , one of which contains the modified X chromosome. When this sperm fertilizes an egg, the SRY on the X chromosome leads to the development of testes and other male sexual characteristics via the production of the testicular-determining factor in the embryo . However, since there are ultimately two X chromosomes - the altered paternal and the maternal - the appearance in adolescents and adults essentially corresponds to that of Klinefelter's syndrome , although the gigantic stature that regularly occurs there is not observed. Here as there, azoospermia leads to infertility (infertility, sterility).

The diagnosis is carried out by means of chromosome analysis ( karyogram ) and the molecular genetic evidence of the SRY, usually as part of a clarification if there is a desire to have children. A causal (causal) therapy is not possible.