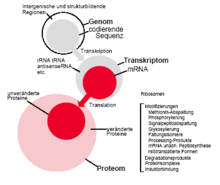 The entirety of all proteins in a living being , a tissue , a cell or a cell compartment , under precisely defined conditions and at a specific point in time, is called a proteome (for example human proteome, potato tuber, bacterial cell, cell nucleus).

The proteome is in a state of constant new synthesis of proteins with simultaneous breakdown of proteins that are no longer required. In contrast to the relatively static genome , the proteome is constantly subject to changes in its composition. These changes are controlled in the course of spatiotemporal gene expression via complex regulatory processes and are significantly influenced by environmental stimuli, diseases, active substances and drugs. The proteome is thus a mirror of its environment and is highly dynamic.

In bacterial cells, the proteome includes around 1,000 to 10,000 different types of protein molecules, depending on the type; in humans, 500,000 to 1,000,000 protein species are expected. It may well happen that several hundred protein species (modification forms) are synthesized from a protein-coding gene sequence by mRNA splicing (not in bacteria) and subsequent modifications of the primary protein by enzymes . These so-called post-translational modifications (occurring after protein synthesis) can be investigated using proteome analysis techniques.

A variety of techniques are available for exploring proteomes. A distinction can be made between methods for separating the individual protein species and methods for characterizing and identifying them. The science of the study of the proteome is proteomics (Engl. Proteomics ) called.

The Human Proteome Project (HUPO for short) and, in Germany, the German Society for Proteome Research are involved in research into the proteome . Protein pattern diagnostics is used commercially , outside of clinical practice, in the context of cancer diagnostics and for diagnosing kidney diseases.

After the sequencing of the entire human genome has been largely completed, research into the proteome z. B. a deep insight into the origin of many diseases and subsequently the development of causally effective drugs. The results of proteome research can be found in special proteome databases , e.g. B. UniProt , GenBank , KEGG , Protein Data Bank , Reactome , Mascot and IEDB .

The term proteome was defined in 1994 by the Australian Marc R. Wilkins at a scientific congress on proteome research in Siena, Italy, based on and analogous to the terms genome and transcriptome .

In a first comprehensive study, the proteome of seven human cell lines was examined and the intersection was determined, the so-called central proteome . This comprised 1124 different proteins above the detection limit. The function of ten percent of the proteins was not known at the time of publication. The metabolic components covered by the central proteome are protein biosynthesis , primary metabolism , cell cycle and apoptosis . The data are made available on proteomecommons.org.

In 2014, researchers in Germany and the USA presented a catalog with almost all proteins produced by humans for the first time, almost simultaneously and independently of one another. In more than 30 tissues, both research groups investigated which proteins are produced in the respective cells. The scientists from the Johns Hopkins University School of Medicine in Baltimore ( Maryland ) recorded 17,294 proteins and thus about 84% of the proteome and the German group of the Technical University of Munich more than 18,000 proteins and thus 92% of the same. It is now known that humans have about 20,344-20,356 suspected protein-coding genes , including 8,874 household genes occurring in all tissues , some regulated genes occurring in all tissues and 6,942 tissue-specific genes. About 80% of the protein-coding genes also produce splice variants . According to localization, there are around 3,171 genes (16%) of secreted proteins, 5,570 (27%) of membrane proteins , 12,467 (61%) of intracellular proteins and 852 genes of proteins that have both membrane-bound and secreted isoforms .

So far, the question of which genes hold the blueprint for which proteins and under which conditions they are read has not yet been fully clarified. The aim is to gain in-depth knowledge about the interaction of DNA , RNA and proteins as the main molecular actors in life. Around 1832 proteins were not found that, according to the gene map, should actually exist. It is assumed that a number of these proteins are only present in embryonic development , but that many known genes have also become functionless and no longer serve as a template for protein synthesis. According to current knowledge, the latter applies to olfactory receptors, among other things, because the sense of smell is no longer essential for human survival. On the other hand, almost 200 proteins have been discovered whose function and properties are still unknown and which are not produced by the known protein-coding genes, but by areas of DNA outside these genes. These areas of the genome, often referred to as " junk DNA ", should, according to previous knowledge, have a regulating function for gene activity, but should not in turn code their own proteins. According to Akhilesh Pandey, this could mean that it is not yet fully understood how cells read DNA. In addition, 24 cancer drugs were investigated, the effectiveness of which on 35 cancer cell lines was clearly related to their protein profiles. The researchers hope that with knowledge of the protein profile of a tumor, drugs could be used in a more targeted manner in the future.