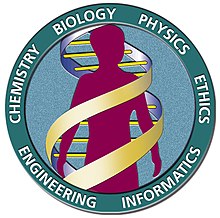 Logo of the human genome project

The Human Genome Project ( HGP , English Human Genome Project ) was an international research project. It was founded in the autumn of 1990 with the aim of fully deciphering the human genome , ie identifying the sequence of the base pairs of human DNA on its individual chromosomes by sequencing . The human genome contains all of the information that can be inherited. With the base pairs of its DNA it codes among other things all proteins . The complete sequencing of the genome forms the basis for research into many biological processes, such as the possibility of researching hereditary diseases and a better understanding of the molecular mechanisms that cause cancer . By comparing the human genome with that of other living beings, scientists hope to gain further knowledge about the origin of certain diseases and new therapeutic options .

Objective of the project

The goals of the project included:

The following important information is missing from this article or section:
At which research institutions was the human genome project carried out? At least for Germany, the institution should be named. Or were several involved?
Help Wikipedia by researching and pasting it . 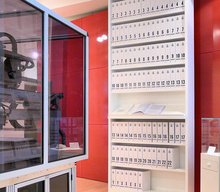 The first expression of the human genome visualized as a series of books on display in the 'Medicine Now' room (Wellcome Collection, London). The information from the 3.4 billion base pairs of DNA has been transferred to more than 100 volumes of books, 1000 pages each, in the smallest possible font size.

The project was founded in the USA in October 1990 by Luigi Luca Cavalli-Sforza as part of a publicly financed international research network. The HGP was first headed by James Watson , one of the discoverers of the structure of DNA. In 1992, however, he left the project after a dispute with NIH boss Bernadine Healy because he rejected Healy's attempts to patent gene sequences. He was succeeded by the renowned geneticist Francis Collins . At the beginning, over 1,000 scientists in 40 countries took part in the project. The aim was to sequence the human genome to 2005. 1992, the project published genetic maps for chromosomes 21 and Y . In June 1995 Germany also joined the international human genome project of the Human Genome Organization and began its work one year later. The German Human Genome Project ( DHGP ) is funded by the Federal Ministry of Education and Research and the German Research Foundation. The Human Genome Organization faced private competition in 1998 from the newly founded US company Celera . Chromosome 22 was sequenced until 1999 . In 2000, chromosome 21 was completely sequenced, increasing the opportunities for research into the effects of trisomy 21 .

The HGP reached its peak in public when in 2001 the complete sequencing of the human genome was announced independently of both research companies, which was often dubbed “decryption” in the media.

In 2003 the completion was finally announced within the framework of the applied standards. The German Human Genome Project successfully ended its activities in June 2004. Building on the work of the German Human Genome Project, the Federal Ministry of Education and Research has been funding the National Genome Research Network (NGFN) since 2001 . The focus of the work is the investigation of the genetic causes of common diseases. The ENCODE project was started as a follow-up project by the National Human Genome Research Institute (NHGRI) .

Since April 2003, the human genome has been officially fully deciphered. Although the meaning of all genes is not yet known, these have been researched in follow-up projects of the HGP since 2003.

Overall, the human genome contains around 20,000 to 25,000 genes. At the beginning, at least 100,000 genes were expected to encode all the characteristics of the human body.

Instead of confirming the thesis of genetic determinism , the results of the HGP "quickly made it clear that it would be extremely difficult to infer certain properties of certain genes". Rather, it became apparent that there was no causally directed relationship between genotype and property, “but that the expression of phenotypic characteristics was a highly complex process of interactions and feedback between DNA, RNA , proteins and cytoplasm ” [ibid].

Several genes are involved in the development of almost all hereditary diseases. Here, research is now faced with the task of clarifying their interaction in detail in the long term and developing appropriate drugs.

After the genome has been deciphered, efforts are now being made to decipher the entirety of the DNA modifications as well as the transcriptome , proteome and metabolome of humans.