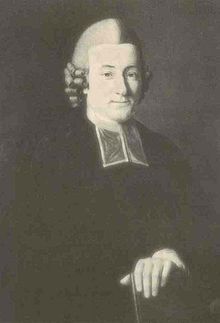 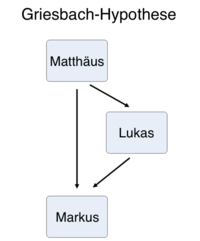 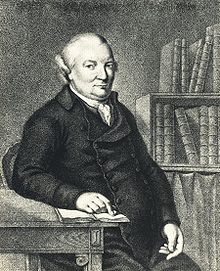 Johann Jakob Griesbach on a painting by Johann Carl Bock

Johann Jakob Griesbach (born January 4, 1745 in Butzbach ; † March 12, 1812 in Jena ) was Professor of the New Testament in Jena from 1775 . Is best known for his hypothesis Synoptic problem : He said that the Evangelist Mark the Matthew and Luke have known and used.

Johann Jakob was born as the son of pastor Conrad Caspar Griesbach (1705–1777) and his wife Johanna Dorothea Rambach (1726–1775), the daughter of the theologian Johann Jakob Rambach . Since his father was given a pastor's post at the Petrikirche and Konsistorialratsstelle in Frankfurt am Main in 1767, the family moved there. Here Griesbach experienced his childhood years and was already influenced theologically in the parental home. In 1751 he moved to the grammar school in Frankfurt am Main, where he became a classmate of Johann Wolfgang von Goethe. At seventeen he moved to the University of Tübingen on April 29, 1762, two and a half years later he moved to the University of Halle , where Johann Salomo Semler , Johann Georg Knapp , Johann Severin's father , Johann August Nösselt became his formative teachers, and on October 18 In 1766 he moved to the University of Leipzig , where Johann August Ernesti and Johann Jacob Reiske exercised significant influence on him.

He also heard lectures by Christian Fürchtegott Gellert , Johann Matthias Schröckh , August Wilhelm Ernesti and Samuel Friedrich Nathanael More . In 1767 he returned to Halle and in 1768 acquired the academic degree of a master's degree in philosophy. He then returned to Frankfurt. In 1769 he completed a scholars' journey that took him through Germany, the Netherlands, England and France. At the local libraries he completed oriental language research, got to know various personalities and expanded the spectrum of his knowledge. On October 6, 1770 he returned from his trip to Frankfurt am Main and completed his habilitation in 1771 at the theological faculty in Halle . Here he became an associate professor of theology in 1773.

At the instigation of Duchess Anna Amalia von Sachsen-Weimar-Eisenach , he was given a full theological professorship at the University of Jena in 1775 .

In Jena he received his doctorate in theology in the same year, was a councilor in 1781 and a secret councilor in 1784. In addition, he participated in the organizational tasks of the university. He was dean of the theological faculty several times and rector of the alma mater in the winter semester of 1780, 1783, 1788 and 1796 .

Since 1809 he was a foreign member of the Bavarian Academy of Sciences .

Griesbach is considered to be one of the fathers of textual criticism in the New Testament . In 1769/1770 he undertook a research trip to collate New Testament manuscripts in libraries in England and France. In 1774/1775 he was the first to publish a critical edition of the New Testament , which was based on the oldest and best manuscripts and deviated to a greater extent from the traditional text form, the textus receptus . Johannes Voigt , who later became a history professor and university archivist in Königsberg, also heard his lectures .

In 1776 Griesbach published his Greek Matthäus - Markus - Lukas synopsis separately from his critical edition of the New Testament (see above), in which it had previously been included, and thus established the tool of a synopsis as an indispensable research aid in New Testament science.

Griesbach described his solution to the so-called synoptic problem of how the first three (similar) Gospels of the New Testament are related to one another in his 1789 work Commentatio qua Marci evangelium totum e Matthaei et Lucae commentariis decerptum esse monstratur . Accordingly, Mark knew the Gospel of Matthew and the Gospel of Luke and shortened both writings. His theory, the Griesbach hypothesis , is, according to the two-source theory, the v. a. in the USA most widespread explanation of the relationship between the Synoptic Gospels.

On the occasion of the 200th anniversary of the publication of Griesbach's Gospel Synopsis as a separate work, a group of international biblical scholars held the “Johann Jakob Griesbach Bicentenary Colloquium 1776–1976” in July 1976 in Münster / Westphalia.

A selection of the papers presented there on Griesbach's life, work and impact, intended to show why the understanding of this scientist's contribution to New Testament criticism is important for the history of New Testament science as well as for current New Testament research, together with the text in original Latin as well as an English translation, under the title:

Dissertation of JJ Griesbach, doctor of theology and professor primary at Jena University, in which he understands that the entire Gospel of Mark was taken from the Gospels of Matthew and Luke, written on behalf of Jena University (1789–1790), now revised and with many Additions can be found in: Bernard Orchard and Thomas RW Longstaff (ed.), JJ Griesbach: Synoptic and Text-Critical Studies 1776–1976 (SNTS Monograph Series, Vol. 34).

Griesbach married on April 16, 1775 in Halle Friederike Juliane Schütz (* April 28, 1755 in Bückeburg – 1831/36), the daughter of the chief preacher of Aschersleben Gottfried Schütz (* 1717 in Aschersleben; † March 16, 1772 ibid.) And his Mrs. Traugotte Anna Sophia Regner. The marriage remained childless. But they had a foster daughter: Bertha Sturm (1799-1857) daughter of the city physician of Eisenach Benjamin Christian Gottlieb Sturm († 1813), she married the professor Friedrich Gottlob Schulze . His wife's sister Charlotte Elisabeth was a hymn poet and writer of edification and married to Heinrich Christoph Nebel . Her brother was Christian Gottfried Schütz .