Aristarchus (os) of Samos ( Greek Ἀρίσταρχος [ὁ Σάμιος] Arístarchos [ho Sámios] ; * around 310 BC on Samos ; † around 230 BC ) was a Greek astronomer and mathematician.

He was a student of Straton von Lampsakos , the head of the school of Aristotle in Athens , and one of the first Greek astronomers to represent the heliocentric worldview , according to which the sun and not the earth is at the center of the universe. Therefore he is also known as the "Greek Copernicus ". However, his theory hardly met with recognition (exception: Seleukos von Seleukia ), so that his ideas were overshadowed by the work of Aristotle and Ptolemy .

The only work by Aristarchus that has survived is entitled On the Sizes and Distances of the Sun and Moon and is still based on the geocentric view of the world . From later quotations from other scholars it is known that he also represented the hypothesis of a heliocentric worldview in another book. Archimedes wrote in his sand bill :

“You, King Gelon, know that astronomers call the 'universe' that sphere with the earth at its center, its radius being the distance between the center of the sun and the center of the earth. This is the general view as you have heard it from astronomers. But Aristarchus wrote a book that consists of certain hypotheses, and which, based on these assumptions, shows that the universe is many times larger than the 'universe' I just mentioned. His theses are that the fixed stars and the sun are immobile, that the earth moves around the sun on the circumference of a circle, with the sun in the middle of this orbit, and that the sphere of the fixed stars, the center of which is this sun and within which the earth moves, has such a great extent that the distance from the earth to this sphere equals the distance from this sphere to its center. "

As a consequence, he deduced that if the center was not the earth but the sun, a parallax would actually be observed. The appearance of the starry sky would have to change depending on the current position during one orbit of the earth around the sun. He explained the lack of parallax by an unimaginably great distance to the fixed stars, compared to which the diameter of the earth's orbit is vanishingly small. In fact, this parallax is less than an arc second even for the stars closest to the Sun and therefore cannot be seen with the naked eye. This apparently lack of parallax was the main argument against Aristarchus' model. The fixed star parallax was not detected until 1838 with telescopes .

The possible personal consequences for Aristarchus are indicated by Plutarch in the dialogue About the Moon Face :

“ Kleanthes [a contemporary of Aristarchus] believed it was the duty of the Greeks to accuse Aristarchus of Samos of godlessness for having set the hearth of the universe [the earth] in motion in an attempt to save phenomena by assumed that the sky was at rest and the earth rotated in a crooked circle and rotated around its own axis. "

Size of the moon

Aristarchus calculations of the sizes of the earth, sun and moon
(copy from the 10th century )

Aristarchus watched the moon move through the earth's shadow during a lunar eclipse . He concluded that the diameter of the earth was 2.85 times that of the moon. In fact, this factor is around 3.67.

Distance to the sun

Aristarchus realized that the crescent moon is created when the sunlight falls exactly perpendicular to the direction in which we are looking at the moon. The triangle sun, moon, earth shows a right angle with a half moon :

Aristarchus experimentally determined the size of the angle between the sun and the moon to be at least 87 °. By drawing a right-angled triangle with an angle of 87 °, you can now determine the relationship between the distances between earth and sun and between earth and moon. Nowadays this ratio can of course also be calculated trigonometrically to 1 / cos (87 °) ≈ 19.1. This shows that the sun is at least 19 times as far from the earth as the moon.

In fact, the sun is about 400 times as far from the earth as the moon. This corresponds to an angle of about 89 ° 51 '. At the same time, this means that when viewed from the sun, the earth and moon appear only nine angular minutes apart.

Aristarchus must have noticed that the angle is almost 90 degrees. In this case, the aim of the measurement had to be the answer to the question: What is the minimum angle? This is the only way to make a reliable statement about the minimum distance from the sun.

Since the sun and moon appear about the same size in the sky, Aristarchus concluded that their actual size must also differ from one another by at least a factor of 19. For the reasons mentioned, this difference is in fact 400 times. But the mere fact that, according to Aristarchus, the sun had to be much larger than the earth was an important indicator for the theory, according to which such a large celestial body must also be in the center of the universe - unless the sun, as Aristarchy's opponents argued massless ether .

Vitruvius mentions him as the inventor of a sundial in the shape of a hemispherical shell. Aristarchus also appears to have developed a theory of eclipses, as suggested by a remark in an anonymous commentary on Homer's Odyssey from the 2nd century BC. 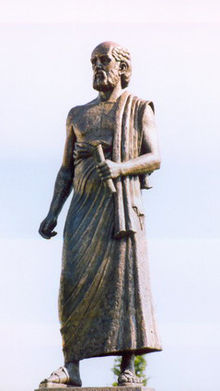 Monument to Aristarchus at Aristotle University of Thessaloniki , Greece 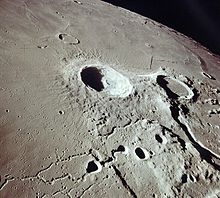 The only Greek-speaking astronomer who followed the views of Aristarchus was Seleucus of Seleukia, who probably came from Seleukia-Ctesiphon . Aristarchus hypothesized that the earth moves around the sun and rotates around its axis. Seleucus is said to have provided the theoretical proof for this.

Aristarchus of Samos is the main character of a historical novel :