The title of this article is ambiguous. Further meanings are listed under Sphere (disambiguation) . 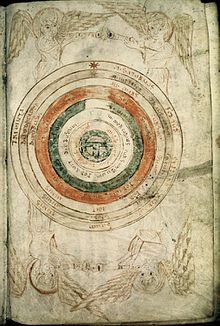 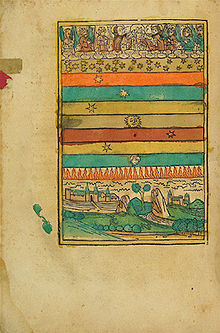 Colored woodcut from the book of nature (edition of 1481), which shows a schematic side view of the spherical model: below the earth, above the various spheres, and above the fixed star sphere the sky .

The sphere [ ˈsfɛːrə ] (from ancient Greek σφαῖρα sphaira , German 'sphere, spherical body, ball , especially earth or sky sphere' from Latin sphaera with the same meaning) is a name that was used in antiquity for those spherical shells orbiting the earth to which the planets , fixed stars , sun and moon were thought to be pinned on, was used.

Building on the ideas of early Greek natural philosophers , the Pythagoreans developed a model that the movement of the spheres creates heavenly music ( music of the spheres ). Hence the term “spherical sounds” for strangely ethereal, ghostly music, which Goethe recorded at the beginning of Faust : “The sun sounds the old way | in brotherly spheres competition song | and their prescribed journey | complete it with a thunderous walk ”.

In ancient Greece, the idea of ​​a spherical earth orbited by seven celestial bodies (the moon, Mercury , Venus , the sun, Mars , Jupiter, and Saturn ) was widespread. However, the word σφαῖρα was rarely used in this context . In Plato's famous dialogue Timaeus, for example, κύκλον (circle) (38d) and φορὰς (path) (39b) are written. In the Roman area, too , the Greek loan word sphaera was initially mainly used with the original meaning "ball". That only changed in the Roman Empire . Both Claudius Ptolemy (2nd century, Almagest , Harmonik ) and Macrobius use σφαῖρα or sphaera for the orbit of the planets. In his harmony (Book 3, VIII-XVI; especially XIV ... of the teleion system compared with the most important orbits of the planetary system ... ) Claudius Ptolemy deals with Pythagorean-Platonic ideas and thus develops his picture of the harmony of the spheres.

The scientific / astronomical knowledge of antiquity survived - even if only partially and in a few manuscripts - the fall of the Roman Empire and was passed on and processed in monastery libraries . At the beginning of the 8th century Beda Venerabilis was able to design a picture of the earth in which a spera caeli (celestial circle , celestial sphere) circles the earth, whereby Pliny the Elder was used. Macrobius was also frequently quoted, so that the doctrine of the planets orbiting the earth on spherical orbits was often presented from the Carolingian Renaissance to Scholasticism . The doctor of the church Albertus Magnus, for example, writes in his work De caelo et de mundo of the sphaerae , in particular of the 8 spheres that orbit the earth from the sphere of the fixed stars to the moon (LIB.2 TRACT.3 CAP.11). The idea of ​​a flat earth was hardly represented by any educated person in the Middle Ages and belongs to the realm of historical legends.

Even Johannes Kepler took issue with the orbits of the planets. Using Kepler's laws , he developed a mathematical basis for this. But that wasn't his only intention. In his work Harmonice Mundi (in which Johannes Kepler published the third law of planets) he creates a world view that combines planetary orbits, mathematical proportions, music theory and astrology .