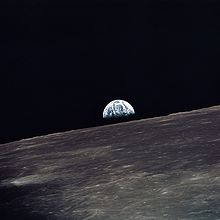 As visibility of astronomical object , the time between his is called apparent appearance on the horizon of one's own site ( rising ), and the disappearance of the star below the local horizon ( sinking ).

The cause of the phenomenon is the rotation of the earth or another location - such as the moon - and (to a lesser extent) the movement of the object towards the observer: In space travel and for earth satellites, the orbital velocity of the missile is the predominant influence.

In addition to the culmination, rising and setting are the most important aspects of astronomical phenomenology , which is why all astronomical calendars and yearbooks contain corresponding dates for the sun and moon. The calculation is carried out using the spherical formulas of the astronomical triangle .

Day arc of the sun over the course of the year (Central Europe, view to the south)

The time between the rising and setting of a celestial body is called the day arc in astronomy . With a completely flat horizon, it divides into two equal sections: from the rise to the highest point ( culmination or meridian passage ) in the south - or on the southern hemisphere in the north - and from there to the setting.

This relationship applies to a topocentric location on every celestial body. The following special features apply on earth :

In the case of fixed stars , all three points in time are early 4 minutes a day because the earth does not need 24 hours for a rotation, but only 23.934 hours ( sidereal day ). In the case of the sun, there is also the influence of the seasons : the culmination time ( true noon ) can vary by ± 16 minutes ( equation of time ), the rises and sets in Central Europe even by ± 2 hours (see sunrise and sunset ). Rising and setting times of the moon can take place at any time of the day due to the moon's orbit, which is independent of the position of the sun .

The direction or the time of rising and setting depends primarily on three factors:

The first two factors mentioned determine the mathematical rise and fall on the ideal horizon:

This in itself simple condition turns out to be extremely complex in the practice of ephemeris calculation: In deriving the position in relation to the observer from the true trajectory using the various astronomical coordinate systems , the determination of the horizon height is the last step, in which all irregularities of celestial mechanics , of geodesy , atmospheric optics and also the theory of relativity - from orbital disturbances of the orbit itself to the complexities of the earth's motion ( earth's orbit , earth's rotation ) as a first approximation point of observation to the non-ideal shape of the geoid as the true point of view of the observer and all other disturbances on the line of sight object – observer. Therefore, there are no closed formulas for the height that can be set to zero , but only more or less precise and / or complex approximations. The easiest is the rising / setting calculation for the " fixed stars " (which is why they got their name). In addition to irregular celestial bodies such as asteroids and comets , the calculation for the moon is the most complex (and this calculation was also one of the most important driving forces in the early development of the lunar theory ) - the " changing stars " also got their name from this; and the rise / fall calculation is one of the most complex problems in astronomical phenomenology as well as a powerful standard of theoretical celestial mechanics and numerical methods of ephemeris calculation.

Rise and fall of non-circumpolar objects

A (mathematical) rise or set occurs only when a star (sun, moon, star, etc.) has a smaller angular distance from the celestial equator than the location from the north pole (or from the south pole in the southern hemisphere ).

Otherwise the star is always above the horizon (“ circumpolar star ”) or always remains below the horizon, that is, there are no rising or setting at all (visibility condition) .

In the case of the sun , the declination changes in the cycle of the seasons between + 23.4 ° and −23.4 ° (see ecliptic inclination ). Therefore it can be temporarily circumpolar beyond the polar circle (B = + 66.6 ° or −66.6 °) ( polar day in summer) or invisible for weeks ( polar night in winter). On the Poles this is the case for half a year ( midnight sun ), on the Arctic Circle (theoretically) only one day.

In addition, the moment of the rise of the sun is defined as the moment in which the upper edge of the solar disk crosses the horizon   (the setting accordingly). This takes place a little earlier than the rise of the theoretical center of the sun disk and varies with the distance from earth and sun, which fluctuates over the course of the year ( apsid distance ) and consequently the apparent diameter of the sun, on average it is 0 ° 32 ′.

Together with the refraction of light described below , this results in a total of about 4 minutes (−0 ° 53 ′ in height), at the equator the process is shortened to 2.1 minutes due to the steeper path of the sun. The clear day is therefore just under 5–10 minutes longer than the day's arc of the sun, and the midnight sun phenomenon also appears when the sun only moves partially above the horizon, i.e. about a degree of latitude south of the Arctic Circle. The sun sets a little further south, but civil twilight extends to the entire period up to the rise - this is known as the White Night .

Moon rise in the evening on the eastern horizon.

The moon lags behind the sun by an average of 50 minutes in its daily movement, but this is strongly dependent on the position in its elliptical orbit . In addition, its declination varies by the value of the inclination of about 5 ° over the course of a tropical month .

Therefore, the rising and setting times shift accordingly. The length of a "moon day" (from one rise to the next) can vary between around 24 h 15 min and 25 h 10 min. Because it lasts on average 24 hours 48 minutes, every synodic month there is a calendar day on which the moon does not rise and one on which it does not set. Under special circumstances (e.g. relatively high in the north) the moon can even rise or set twice in one day.

The visibility of satellites is crucial for satellite-based position determination, for example , as their measurement accuracy is directly related to the number of satellites that are just above the horizon. Therefore, the total number of satellites integrated into the system must be chosen so that for each location of the covered area of ​​the earth's surface whenever one satellite “goes down”, another “rises” and replaces it, as well as the number of visible satellites never drops below four. For more information, see the section Structure and Functioning of the Positioning Function in the Global Positioning System and Galileo (satellite navigation) .

In comets, in addition to the rapidly changing orbital position, the dominant factor is the strongly changing brightness, i.e. visual visibility ( clear view ).

Sunrise over the Siebengebirge: In the picture on the right there is a distant horizon that roughly corresponds to the ideal. The sun is already much higher.

The following explanations also apply to the actual sinking .

The third factor mentioned above ( natural horizon ) has - except at the sea and on the plain - the decisive influence on the date: The actual ascent only takes place when the object rises above the landscape horizon.

In the mountains , the angular distance between the mathematical and actual rise is often several degrees, so the time interval goes into the hours and in an unfavorable location can also lead to the sun not rising at all in some valleys in winter. Therefore, the sunny side and the shady side are a central aspect of the settlement geography and also influence the tree line and other microclimatic aspects as well as many terrain formations through erosion .

On the sea - for higher altitudes above sea ​​level - because of the curvature of the earth , instead of the landscape horizon , the depth of the keel , through which the visibility of the stars is extended by a few minutes. The influence of the skin depth on the points in time - in the event of a sufficiently large curvature - is shown most vividly on the planet of Saint-Exupéry's Little Prince : On his small planet, it is enough to move the armchair a little further to experience another sunset.

On the space stations and space shuttles , which are circling in a low earth orbit , an ascent occurs approximately every 1½ hours, corresponding to the short orbital period.

The astronomical refraction of the earth's atmosphere, which makes a star close to the horizon appear about 0 ° 34 'higher, has a great influence . In the mountains, the local climate on the valley floor or on a valley shoulder is also decisive.

In the vicinity of the horizon, the light of every star is weakened ( extinction ) and discolored because it has to cover the longest possible path through the earth's atmosphere . Depending on the weather , the sun and moon can be associated with a play of colors from red to yellow or purple, which is related to the refraction of light and suspended matter ( aerosols ). In addition, the celestial body or the edge of the moon and the sun can billow strongly when rising / setting, because warm layers of air close to the ground influence the astronomical refraction.

The formula is also used to calculate the mathematical rise and fall: Since the height is hardly calculated implicitly, the height is determined for the probable point in time (e.g., with continuous ephemeris calculation, that of the previous day plus the above-mentioned average value for the Day difference), and then iteratively determines a sufficiently precise value, or interpolates between the values ​​of an ephemeris table .

For the actual ascent you then need tabulated values ​​for the landscape horizon. Since this is - in general - halfway continuous , one determines the azimuth for the value found, and solves the equation in the time interval in a progressive approximation

Or you can determine directly as a two-dimensional iteration:

: Position in the topocentric coordinate system ,

The calculation of a rise solely from the location of the observer is one of the most complex achievements in astronomical phenomenology, but today - at least up to the mathematical rise stage - it is implemented in many astronomical programs or is available interactively on the Internet .

The calculation of the day arc of the sun is of particular importance for calculating the effectiveness of solar systems or in architecture for estimating the incidence of sunlight ( sun position diagram ) and is implemented as a light module in CAAD software .

For the calculation see web links in Ephemeris