The title of this article is ambiguous. Further meanings are listed under Anaximander (disambiguation) . 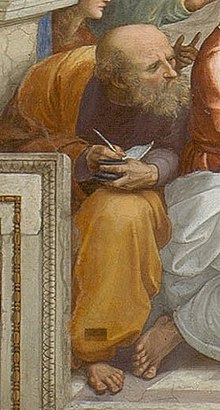 Presumed representation of Anaximander from the school of Athens by Raphael , 1510/1511, Raphael's rooms in the Vatican

Anaximander ( Greek  Ἀναξίμανδρος [ὁ Μιλήσιος] Anaxímandros [ho Milḗsios] ; * around 610 BC in Miletus ; † after 547 BC ibid) was a pre-Socratic Greek philosopher . Along with Thales and Anaximenes, he is one of the most important representatives of that philosophical awakening, which is described with collective terms such as Ionic Enlightenment and Ionic natural philosophy .

Classification of person and meaning

According to Apollodorus of Athens , Anaximander lived around 610-546 BC. In Miletus. It is likely that he knew Thales and lived with him in close association with him. In any case, he is considered to be the successor and student of the valley.

He was preoccupied with the same basic problem as Thales, namely the question of the origin of all being, of the arché ( ἀρχή ). For this, however, he did not consider the water, but the materially indeterminate Ápeiron ( ἄπειρον ): the "unlimited" or "immeasurable" in terms of its size. Only a single fragment of Anaximander's philosophy has come down to us in his own words . This is the first preserved Greek text in prose form . The majority of Anaximander's philosophical views can be found in the Aristotle tradition two centuries later and is fraught with some uncertainties.

As an important astronomer and astrophysicist , he was the first to design a purely physical cosmogony . He based his considerations on the origin of the world as a whole exclusively on observation and rational thinking. It was from him that the designation of the world as cosmos (κόσμος) and its comprehension as a systematically ordered whole came from. Anaximander was also the first to draw not only a geographical map with the distribution of land and sea known at the time, but he also constructed a sphere , a celestial globe . The map is lost today, but was later evaluated by Hekataios , from whose work a semi-concrete representation of the worldview of that time has come down to us.

The moon crater Anaximander is named after him.

Origin and principle of order of the world as a whole

According to Anaximander, the basic substance of everything that has become, the apeiron , is interpreted in different ways: as a spatially and temporally unlimited primordial substance , as infinite in terms of mass or divisibility, as indefinite or limitless, etc. am The concept of the immeasurable probably best reflects the openness of the possible interpretations of the Apeiron. According to Aristotle, Anaximander regarded it as an immortal and indestructible being comparable to the gods of popular religion.

The only surviving Anaximander fragment is the first ever written and handed down sentence of Greek philosophy. However, the relevant research is divided as to the extent to which the traditional material actually goes back authentically to Anaximander. The rendering by Simplikios in the 6th century AD is based on a lost work by the Aristotle student Theophrastus of Eresus . The core statement reads: “(But from what the arising is for beings, then its passing also takes place) according to necessity; for these create balance for each other and pay penance for their injustice according to the order of the times. "

The as it were regular mutual replacement of opposing forces or substances in a continuous and balanced process should stand for the constant order of the cosmos: a system that is exposed to change and change and yet stable in itself. Research disagrees as to whether the apeiron is also involved in this process or whether it is a purely inner-worldly balancing process, so that the effect of the apeiron was limited to the phase of world formation . In the other case, ideas of a plurality of worlds that exist side by side or one after the other would also come into consideration. Robinson contemplates that Anaximander may have thought of the universe as an eternal process, “in which an infinite number of galactic systems are born from and re-incorporated into the Apeiron. He would have brilliantly anticipated the worldview of the atomists Democritus and Leukippus , which is usually regarded as their own achievement. "

Anaximander believed that when today's ordered universe came into being, something that produced heat and cold was separated from the eternal, and that a ball of fire grew around the air around the earth, like the bark around a tree.

According to Anaximander, the stars are created by the burst fireball, as the split-off fire is enclosed in air. Certain tube-like passages were to be found in them as blow-out points; they are visible there as stars . The eclipses would also arise in the same way, namely by locking the blow-out points.

The sea is a remnant of what was originally damp. “Originally the whole surface of the earth was damp. But as it was then dried out by the sun, one part gradually evaporated. This created the winds and the turns of the sun and moon, while the rest of the part formed the sea. Therefore, as it dehydrated, it would have less and less water, and eventually it would gradually become completely dry ”(Aristotle on Anaximander). The winds arise from part of this moisture, which evaporates from the sun, as the finest vapors in the air are excreted and, when they are collected, are set in motion. The solstices and lunar turns also happen because they, because of those vapors and vapors, made their turns by turning to places where the supply of this exhalation was guaranteed. 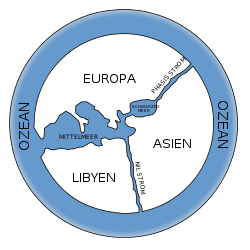 The earth is what was left of the original moisture in the hollow parts of the earth. Anaximander thought that the earth was floating, not overwhelmed by anything and resting in a state of rest because of its equal distance from all celestial circles . Their shape is round, arched and resembles a cylinder in the manner of a stone column segment . We would stand on one of their bases; the other is opposite to this. Rainfalls formed from the evaporation caused by solar radiation from the earth. Lightning arises when the wind rushes into the clouds and breaks them apart.

Theory of the Incarnation and the Soul

Anaximander traced the origin of mankind back to other living beings. He had noticed that compared to other species, humans need a very long time in the early stages of their development before they can provide for self-sufficiency and survival on their own. He therefore assumed that the first humans emerged from animals, namely from fish or fish-like creatures. For he sought the origin of living things in water; For him, life was a spontaneous emergence from the damp environment: “Anaximander says that the first living things arose in the damp and were surrounded by prickly bark. In the further course of their lives they went to the dry land and, after the bark around them had burst open, spent their lives in other ways for a short time. "

The soul held Anaximander for air like . The idea of ​​the soul as aër may have been based on the connection with life or breathing in and out. It is unclear whether he distinguished between the human breathing soul and that of other living beings.

How Anaximander's conception of Apeiron and the cosmos related to his idea of ​​the soul, whether there was any relationship between them at all, is uncertain. Since Anaximander thought the soul was airy, some suspect that he attributed immortality to the soul. It remains to be seen whether he thought of an animation of the cosmos, of an all-soul animation, similar to what Thales had probably imagined, and also of the immortality of individual souls.