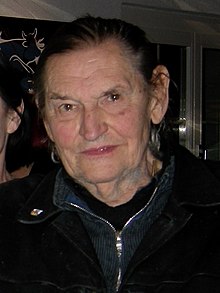 Luginbühl grew up in Bern . Luginbühl met his first wife Greti Kläy at the trade school . The marriage followed in 1950; the marriage has two daughters. Luginbühl dedicated his stone figure Greti to Kläy, calling her the seated woman after the divorce in 1957. Since his apprenticeship as a sculptor, he worked as a freelance artist, partly together with his second wife Ursi, and their three sons, Brutus, Basil and Jwan, and their daughter Eva. He had a long and deep friendship with the Swiss artist Jean Tinguely . In 1950 and 1956 he received a federal art grant . Since 1965 he lived in Mötschwil on a farm that was converted into the Luginbühl Foundation's sculpture park.

He became known as an iron sculptor in the late 1950s. He was particularly impressed by his works, which he created from material that he found in scrap yards or disused industrial plants. The sculpture Slim Aggression was first presented in 1959 at the First Swiss Horticultural Exhibition G | 59 as part of the abstract, internationally recognized garden of the poet by Ernst Cramer . With the sculpture Tell (1966) Switzerland represented itself at the world exhibition in Montreal in 1967. He was a participant in documenta III in Kassel in 1964 and he was also represented as an artist at documenta 6 in 1977.

Bernhard Luginbühl died shortly after his 82nd birthday on February 19, 2011.

There is a Luginbühl museum in the old slaughterhouse in Burgdorf .

Many of his structures are set up in public spaces, such as B. the big giraffe in Zurich , also in Zurich the silver painted Silver Ghost (1966) or the anvil in Muttenz .

Two of his works are in Hamburg . His flat plastic made of industrial steel Kleiner Zyklop from 1967 was given its place of honor in front of the Hamburger Kunsthalle. His 25-ton iron sculpture port gate figure from 1981/1982, which looks like a dragonfly and was made from the rudder stock of a giant tanker, stands on the Johannisbollwerk flood protection system opposite the Swedish seaman's church.

Many works of art by Bernhard Luginbühl are on display in the Hotel de la Gare in Sugiez . This is based on Luginbühl's long-standing friendship with the owner Hans-Ueli Leisi. In December 2007 the “Bar des Artistes” opened in the same hotel, another platform for Bernhard Luginbühl. The Luginbühl family of artists now has a permanent exhibition and many of their works in the Hotel de la Gare.

He began his spectacular cremation campaigns in 1976 on the Allmend in Bern . He let the huge wooden structure Zorn go up in flames, accompanied by music and fireworks as well as eating and drinking parties. The Berlin Zorn burned in 1981 in Berlin-Kreuzberg and the Last Zorn in 1983 in Burgdorf . On the occasion of his 70th birthday on Zurich's Sechseläutenplatz , he was allowed to burn down the figure of the fire wheel . On Millennium New Year's Eve , he burned the 24-meter-long and 10-meter-high plastic Silvester on the Gurten , a work that 10 people had worked on for a year. He burned the Stansstader kite on August 1, 2002 on Lake Lucerne .

Luginbühl also worked as a film director. He directed the animated film Drama of the Lonely Dog (1967), the documentary Kleiner Emmentalfilm (1970) and the portrait film The Artist Adolf Wölfli (1977). His work was documented by Fredi M. Murer in the film Bernhard Luginbühl (1966) and in the video Bernhard Luginbühl II (1989) by Peter Guyer.

He designed the obverse of a commemorative coin for the Swiss mint in 1982. The Gotthard Railway is depicted on the coin .