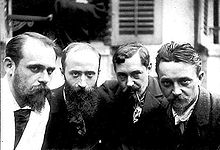 Édouard Vuillard (born November 11, 1868 in Cuiseaux ( Saône-et-Loire department ), † June 21, 1940 in La Baule ( Loire-Atlantique department )) was a French painter of intimism and is also counted among the Nabis artists' group .

Vuillard was close to the Impressionists . Alongside Pierre Bonnard , Maurice Denis and Paul Sérusier and his brother-in-law Ker-Xavier Roussel, he was a member of the Les Nabis group of artists . As an important graphic artist, he mainly created excellent lithographs. The magazine La Revue blanche owes him some of its best papers. For his oil paintings he developed particularly matt and transparent colors. He is considered one of the main masters of post-impressionism . Vuillard was a passionate amateur photographer who also used the photos as templates for his paintings.

In 1938 Vuillard was elected to succeed Paul Émile Chabas in the Académie des Beaux-Arts .

Édouard Vuillard died at the age of 71 and was buried on the Parisian Cimetière des Batignolles in the family grave of the Vuillard.

In 1964, his works were shown in the hand drawings department at documenta III in Kassel .