Maurice Denis (born November 25, 1870 in Granville (Manche) , † November 13, 1943 in Saint-Germain-en-Laye ) was a French painter of Symbolism and co-founder of the artist group Les Nabis . 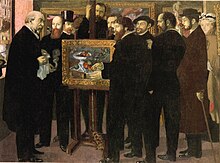 Denis was born the son of a railway official. In 1871 the family moved to Saint-Germain-en-Laye near Paris, where he lived all his life. In 1888 he attended the Académie Julian in Paris, where Paul Sérusier convinced him of the painting style of the Pont-Aven school . In 1890 he exhibited for the first time (with the picture “The Choir Boy”) at the Salon and published his first theoretical article in the journal Art et Critique . He was a founding member of the artist group "Les Nabis" together with Pierre Bonnard , Paul Sérusier and Édouard Vuillard ; he shared the studio with Bonnard and Vuillard. In 1891 he took part in the exhibition of Nabis in the Le Barc de Boutteville gallery . Denis is considered to be the most important theoretician in this group.

On his trips to Italy between 1890 and 1895 he studied the works of the Renaissance and in particular the works of Piero della Francesca . In 1903 Ambroise Vollard published his 216 woodcuts imitating Christ and in 1911 the illustrated edition Sagesse by Paul Verlaine . Further trips, including to Moscow (1909), Algeria and Tunisia (1921), Palestine, Greece (1924) and the United States and Canada (1927) followed.

One of his students was the Art Deco painter Tamara de Lempicka .

Denis created pictures with simple shapes, gently curved lines and pale colored surfaces. His work includes wall paintings, panel paintings and graphics , as well as book illustrations. From 1919 he tried above all to revive religious art and founded the workshops for church art with Georges Desvallières (1861–1950) . In 1920 he created the altar mosaic in the basilica of the Saint-Maurice Abbey in the Swiss canton of Valais . It shows the coronation of St. Mauritius. From 1932 Denis was a member of the Académie des Beaux-Arts as the successor to Jean-Louis Forain . Maurice Denis died in 1943 as a result of a car accident.

In 1980 the Musée Maurice Denis opened in the artist's house in the Paris suburb of Saint-Germain-en-Laye .