This article is about the French painter. For the Swiss Art Brut painter, see Pierre Bonard . 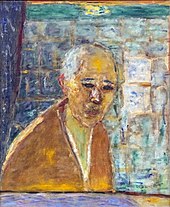 Pierre Bonnard (* 3. October 1867 in Fontenay-aux-Roses in Paris ; † 23. January 1947 in Le Cannet in Cannes ) was a French painter of the Post-Impressionism . He is a representative of intimism and is also counted to the group of artists of the Nabis , which wanted to open up painting to decoration and arts and crafts . After their dissolution at the beginning of the 20th century, Bonnard found an independent style of painting, which he varied little until his death and in which an intense color effect was increasingly more important than the depicted subject .

Pierre Bonnard was born the son of a civil servant. He first studied law at the Sorbonne before switching to art studies at the Académie Julian , where he made the acquaintance of the painters Maurice Denis , Henri-Gabriel Ibels (1867–1936), Paul Ranson and Paul Sérusier . He then studied at the École nationale supérieure des beaux-arts de Paris (ENSBA), where he met Édouard Vuillard and Ker-Xavier Roussel , among others .

In 1889 he sold a draft poster ("France-Champagne"). In 1890 he founded the artist group Les Nabis together with Denis, Sérusier and Vuillard , from which he soon separated. He was well acquainted with the art dealer Ambroise Vollard , of whom he made several portraits. Bonnard exhibited in the Salon des Indépendants and met Henri de Toulouse-Lautrec . In 1896 he had his first exhibition with Paul Durand-Ruel . In 1905 he went on a trip to Spain with Vuillard, who in the following years traveled a. a. to Belgium, Holland, England, Italy, Algeria, Tunisia and southern France followed. In 1911 he rented a studio in the Parisian artist house Les Fusains , which he kept until the end of his life. In 1925 he finally bought a house in Le Cannet .

From 1937 Gisèle Belleud was his student until his death. In 1942 Bonnard exhibited together with Henri Matisse , Francis Picabia and Belleud in the Serguy Gallery in Cannes after his wife Marthe died on January 26th. Marthe figured as his model in numerous paintings by Bonnard. In 1942 and 1944 portraits of Gisèle Belleud were made in the studio while she was portraying her teacher Bonnard (Portrait Bonnard with his dog Poucette on his knees, 1942, and Portrait Bonnard with hat in the studio, 1944). Bonnard died in his Villa Le Bosquet in 1947.

The main motifs of Bonnard, who was fascinated by the Japanese woodcut , included landscapes, flower gardens, sailing boats and the female nude. He was particularly fascinated by the pictures of Paul Gauguin and, because of the strong importance of light in his works, is one of the painters of post-impressionism, although he basically realized his own style, which goes in the symbolist direction. In 1964, his works were shown in the hand drawings department at documenta III in Kassel .

For his services he was made an honorary member of the Royal Academy of Arts (Hon. RA) in 1940 .