Gorky is a redirect to this article. For the asteroid of the same name, see (2768) Gorky . 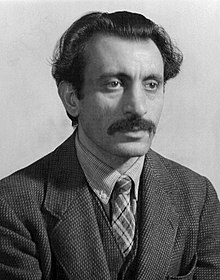 Vosdanig Manoug Adoian ( Armenian Ոստանիկ Մանուկ Ատոյեան , * 15. April 1904 in Khorkom , Vari Hayoz Dzor , Van Vilayet , Ottoman Empire ; † 21st July 1948 in Sherman , Connecticut , United States ), better known under the pseudonym Arshile Gorky , was an Armenian-born draftsman and painter who became an American citizen in 1939 . Although he himself did not feel that he belonged to the group of surrealists , he was the last artist to be included in this group. His work pioneered Abstract Expressionism . It inspired the artists of the New York School .

From 1924, the displaced artist created a new identity for himself under his pseudonym , which was composed of the Caucasian form of the Armenian first name arshak or arsakes (from Persian: little bear ) and the Russian surname Gorky ( bitter ) . He described his previous life in different, not always truthful ways. For example, he named Tbilisi as the place of birth, claimed to have studied in Paris and posed as a member of the Paris artist group Abstraction-Création (1931–1937), as well as a member of Maxim Gorky , without taking into account that he also adopted a pseudonym would have. Furthermore, in the late 1960s and early 1970s, Gorky's nephew Karlen Mooradian submitted English translations of letters that Gorky is said to have written to his sisters in the Armenian language and whose authenticity is now being questioned. Since both Gorky's statements and the presumably forged letters flowed into many biographies, the description of Gorky's first phase of life must be met with corresponding skepticism.

The later artist was born in the village of Khorkom on Lake Van (today Dilkaya in the Turkish district of Edremit ) as the son of the Armenian farmer Sedrak Adoyan and his wife Shushan, daughter of the Armenian apostolic priest Sarkis Der Marodorosian. The child was baptized with the name Vostanik after the birthplace of his mother, whose ancestors had lived in the small monastery Charahan Surp Nischan in Vostan for centuries , but from around the age of four in the family circle after his grandfather from the paternal line Manuk (English Manoog ) called.

During the times of persecution and the genocide of the Armenians , Vosdanig's parents had entered into a marriage of convenience after losing their first spouse. Shushan's father was murdered in 1898, her sixteen-year-old brother Nishan in 1903. Sedrak Adoyan left his wife with him in this dangerous situation returned four children under the care of his brother in Khorkom when he emigrated to the United States between 1906 and 1910 to avoid being drafted into the Turkish army . Vosdanig grew up with his sisters: the oldest half-sister Akabi, from Shushan's first marriage, Satenik and Yartoosh. The boy showed artistic talent at an early age and began to work in wood carving in 1908. He may have found models for this in the 40 artistically carved tombs of his ancestors in the Charahan Surp Nischan monastery church. In the same year he entered the Armenian Apostolic Village School, where he received drawing lessons, among other things. With his mother and two of his sisters, he moved to Aikesdan, a suburb of Van, in 1910 . The city was razed to the ground in the First World War , while Vosdanig's relatives in Khorkom fell victim to the genocide (1915). This prompted Vosdanig's mother to embark on a forced march about 200 kilometers long with her children and to seek refuge in Yerevan . After his two eldest sisters had also emigrated to the United States (1916) and their mother, who had been deprived of flight and deprivation, died of emaciation (1919), the young half-orphan managed to get along with his younger sister Yartoosh, whom he later often in his Works represented breaking through to Ellis Island . When the siblings arrived in New York in April 1920 , the immigrant (if 1904 was the year of birth) was just 16 years of age.

The siblings were accepted by half-sister Akabi in Watertown , Massachusetts . Vosdanig soon traveled on to Providence to temporarily stay with his father, whom he could barely remember. He could no longer develop a closer relationship with him and was also not informed of his later death (1947). By the spring of 1921 he attended Providence's Technical High School , then the New School of Design in Boston (1922-1924), later the National Academy of Design and the Grand Central School of Art , both in New York. After graduating, he presumably taught at the latter school. In New York he took the pseudonym Arshile Gorky (1924), rented a studio in Manhattan (36 Union Square) and made his debut at the Museum of Modern Art in the group exhibition Exhibition of work of 46 painters and sculptors under 25 years (1930).

He made contact with other young artists in New York. In 1927 he met the painter Ethel Schwabacher (1903–1984), who would later be his supporter and biographer, with whom he would be lifelong friends. He made friends with the two Cubists Iwan Dabrowsky alias John D. Graham (1886–1961) and Stuart Davis (1894–1964), as well as with the set designer and interior designer Friedrich Kiesler (1890–1965), who immigrated from Austria in 1926 . After 1933 he supported Willem de Kooning (1904–1997) from the Netherlands, with whom he rented a studio together and remained one of his closest friends throughout his life.

Gorky's first solo show, which was followed by others (see below), took place at the Mellon Galleries in Philadelphia (1934). In 1935 he received support from the Works Progress Administration (later Works Projects Administration, or WPA for short), which had recently been founded to alleviate the hardship caused by the Great Depression . The agency, which carried out job creation measures for unemployed workers and craftsmen, but also intellectuals and artists, commissioned Gorky as part of the Federal Art Project (FAP) to carry out a large-scale wall decoration for the Newark Airport in Newark , New Jersey, which opened in 1928 . The work was shown in 1936 as part of a WPA exhibition at the Museum of Modern Art in New York and never came to its intended location, as the airport served as a base for the US Army from the beginning of World War II .

Gorky received official artistic recognition in 1937 when the Whitney Museum bought his work Painting (1936/37) following an exhibition organized there , as well as by participating in the World Exhibition in New York (1939) on the occasion of which he painted his wall decorations in Aviation Pavilion. In 1941 the Museum of Art in San Francisco dedicated a retrospective to him.

The meeting in 1942 with the surrealist Roberto Matta (1911–2002) and the two years later with André Breton (1896–1966), who moved to New York as a result of the occupation of France by German troops , had a lasting impact on his career. In New York, the gallery owner and art dealer Julien Levy (1906–1981) represented the interests of the Surrealists since he had been part of the Parisian avant-garde towards the end of the 1920s. Julien Levy later claimed Gorky's discovery for himself. However, he did not devote a solo exhibition to him in his renowned gallery until 1945.

At that time, the artist began to convert a barn into a studio in Sherman, Connecticut, with the help of his friend, local architect Henry Hebblen , in which many of his paintings and drawings and a large number of his books fell victim to a conflagration in 1946. Eventually he moved his main residence to Sherman (1947) and only had his studio in New York.

After being diagnosed with colon cancer and the subsequent operation, Gorky suffered from deep depression . In 1948 he broke his neck in a car accident that he suffered with Julien Levy. The consequences were paralysis of the right arm, unbearable headaches and sleep disorders. Under the influence of alcohol, Gorky pushed his wife Agnes, née Magruder, who he had married in 1941, down a flight of stairs in a fit of rage, whereupon she left him with their two young daughters.

Arshile Gorky hanged himself in his Sherman studio in July 1948 at the age of 44. He rests there in the North Cemetery.

His eldest daughter, the painter Maro Gorky, married Matthew Spender (son of the British writer Stephen Spender ), who wrote a book about Gorky's first phase of life in Khorkom.

The talented and intuitive artist took every opportunity to draw as a child and prepared his paintings with meticulous preliminary drawings throughout his life. He was mainly self-taught , attended exhibitions and read art books. He studied and copied, in accordance with the traditional academic method, the techniques of great masters from antiquity to the present and acquired not only artistic skills but, as colleagues and students pointed out, an astonishingly extensive knowledge of the oeuvre of Joan Miró and that of Pablo Picasso (and other artists like Fernand Léger ). The sources of inspiration that nourished his work are correspondingly diverse. 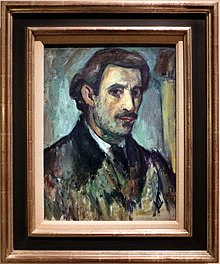 The early work is mainly characterized by Gorky's engagement with the works of Paul Cézanne ( Self portrait at the age of nine ) and Pablo Picasso. The influence of synthetic cubism , which can be clearly seen in certain of his drawings, goes back, among other things, to an artistic exchange with John D. Graham, who lived in Paris and interacted with both the Cubists and the Surrealists there. These drawings earned Gorky the nickname "Picasso of Washington Square" . Other drawings, such as the portrait of the artist's sister, are influenced by Picasso's Ingresque period. He was also inspired by Picasso's studio pictures from 1927/28, although Gorky's much looser, softer and more dynamic brushwork contrasts with the strict, hard contours of the Catalan artist ( The artist and his mother ).

In the 1930s, the painter gradually broke away from these (and other) models. On the one hand, from then on (and until the end of his life) he dealt more and more with his Armenian origins and childhood, on the other hand he began to devote himself to outdoor painting. The work in nature accompanied a fundamental change in the way of working, the style and the image content. Features for this include, among other things, an apparently explosively liberated, significantly faster gesture, a more fluid application of paint and more luminous shades as well as the subtle, often ambiguous allusions to organic or anatomical forms that were increasingly incorporated into the paintings until the early 1940s (Garden in Sochi) .

Gorky then turned to surrealism , with particular focus on Joan Miró and Roberto Matta . He adopted Miró's cryptic line language, which appeared to him as an optimal symbiosis of people, animals and plants. He adopted the automatic spelling from Matta . From the set pieces by Miró and Matta, he found a personal visual language that logs dream images as an amorphous flow.

During his teaching at the New York “Grand Central School of Art” he conveyed the European tradition to American students and was a pioneer of abstract expressionism .