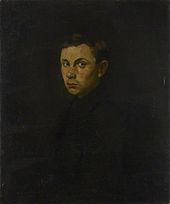 Benjamin Lauder "Ben" Nicholson OM (* 10. April 1894 in Denham in the county of Buckinghamshire , † 6. February 1982 in London ) was a British painter and object artist . Nicholson was the son of the artist Mabel Pryde and the painter William Nicholson and the brother of the painter Nancy Nicholson . From 1938 to 1951 he was married to the sculptor Barbara Hepworth . 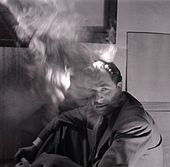 Nicholson attended Gresham's School in Norfolk and in 1911 the Slade School of Art in London for one semester . Between 1911 and 1918 he stayed in Tours , Milan , Madeira , London, North Wales and Pasadena .

In 1920 Nicholson married the painter Winifred Roberts, with whom he had three children. In 1925 he joined the group " Seven and Five " in London, which he left in 1936. He became a member of the “Unit One” group in 1933. In 1938 he married Barbara Hepworth for the second time, with whom he also had three children, they were triplets, born in 1934. From 1932 to 1939 he lived in London and had contacts with Piet Mondrian and Naum Gabo . In 1939 the couple moved to St Ives in Cornwall , where he lived until 1955 and where a center of abstract art, the so-called "Penwith Society of Artists", was formed around him and Barbara Hepworth. The divorce from Barbara Hepworth took place in 1951.

A retrospective of his work was exhibited at the Tate Gallery in London in 1955 . In 1958 he and his third wife, whom he married in 1957, the Swiss photographer Felicitas Vogler, settled in Castagnola on Lake Maggiore . In 1971 he separated from her and moved to Cambridge alone . The divorce took place in 1977. His last place of residence from 1972 was Hampstead in London, where he worked in the studio until his death.

In his work he was influenced by Pablo Picasso and the Dutchman Piet Mondrian. From the latter comes the stylistic term neoplasticism , which also became determinative for Nicholson's works, namely the emphasis on the vertical and horizontal as well as yellow, red and blue as primary colors and the colorless levels of white, gray and black. Until 1937 he was a member of the group " Abstraction-Création ".

Some of his works are on display at the Tate Gallery, St Ives and Kettle's Yard Art Galleries in Cambridge.

Nicholson created landscapes and still lifes as well as reliefs.