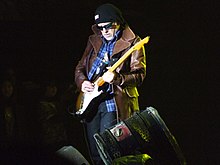 Brad Ernest Whitford (born February 23, 1952 in Winchester , Massachusetts ) is an American musician. He became famous as the rhythm guitarist for the rock band Aerosmith .

Whitford played in largely unknown bands such as Teapot Dome, Earth Incorporated, Cymbals of Resistance and Justin Tyme in the 1960s. Later, the musical influences of Led Zeppelin and Humble Pie shaped his game towards blues rock . He attended the renowned Berklee College of Music in Boston. In 1971 he joined the rock band Aerosmith and replaced the previous second guitarist Raymond Tabano . After commercially successful albums like Toys in the Attic and Rocks , drug problems led to tension in the band, and Whitford and lead guitarist Joe Perry left Aerosmith in the late 1970s. Whitford founded the Whitford / St. Project with Ted Nugent's former guitarist Derek St. Holmes . Holmes . Their self-titled album from 1981 was a commercial flop.

In 1984 Whitford and Perry returned to Aerosmith, where they continue to play.

In 2001 Whitford was inducted into the Rock and Roll Hall of Fame as a member of Aerosmith .

Whitford has three sons from his second marriage to Karen Lesser. He has been married to Kimberly Whitford since 2006, with whom he has one child.