The title of this article is ambiguous. For the Canadian-American actor of a similar name, see Joey Cramer (* 1973). 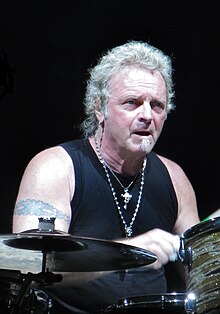 Joey Kramer at an Aerosmith concert in Caracas in 2013

Joseph Michael "Joey" Kramer (born June 21, 1950 in New York City ) is an American musician. He became famous as the drummer for the rock band Aerosmith .

Kramer attended the renowned Berklee College of Music in Boston in 1970 , but left it without a degree. Aerosmith emerged from a loose acquaintance with Steven Tyler , Joe Perry and Tom Hamilton in late 1970. The idea for the band name is attributed to Kramer. In 1971 Brad Whitford replaced the second guitarist Raymond Tabano and thus completed the formation of the band that is still valid today. While Perry and Whitford left the group temporarily for a few years in 1979 and 1981, respectively, Kramer, like Tyler and Hamilton, has been a member of Aerosmith without interruption since its inception.

In 2001, Kramer was inducted into the Rock and Roll Hall of Fame as a member of Aerosmith .

Kramer has a son and a stepdaughter from his first marriage (1979-2007) to April Kramer. He has been married to Linda Kramer (née Linda Pappan) since 2009 and now lives in Georgetown, Texas. He is the owner of Joey Kramer's Rockin 'and Roastin' Cafe in North Attleboro, Massachusetts, which opened in 2016 .