Ritgen was born as the son of Ferdinand von Ritgen and Clara von Ritgen. Herald born. His father was a physics councilor in Stadtberge and was appointed professor of medicine at the University of Giessen in 1814 .

In the fall of 1825 Ritgen entered the secondary school of the Giessen high school , from 1828 he studied medicine at the University of Giessen. After four semesters, he decided to devote himself to architecture and studied architecture with Georg Moller in Darmstadt in addition to fine arts and mathematics. After his state examination in construction in 1833 , he obtained his doctorate on August 9 of the same year. phil., then he began a study trip from September 1833 to May 1834, which took him via Belgium and northern France to Paris .

From 1835 he held lectures on descriptive geometry and situation drawing in Gießen . In the same year he completed his habilitation in Gießen and in 1836 became a secretarial assistant at the Hessian Oberbaudirektion Darmstadt . He passed a general examination in the technical subject in 1837 and became a repetent in the construction subject at the University of Giessen. In 1838 he became an associate professor of architecture. At the same time he was one of the initiators of the establishment of the local trade association's craft school. Classes began on January 14, 1838 with 28 students. The crafts school was a forerunner of the construction school , the polytechnic , the state engineering school , the Gießen-Friedberg technical college and today's THM .

Since 1840 he was a member of the Gießen trade association and sponsor of the trade school, a forerunner of the craft school.

On November 14, 1843 he was appointed full professor at the University of Giessen.

Grand Duke Carl Alexander von Sachsen-Weimar-Eisenach tried since 1843 to find a capable architect to restore the Wartburg . Ritgen applied alongside other architects for this task and was awarded the contract after presenting his plans. The reconstruction of the Wartburg became his personal life's work and lasted until shortly after his death until 1890.

In 1847 he wrote a 140-page document entitled “Thoughts on the Restoration of the Wartburg”, in which he presented his thoughts on the appearance of a medieval castle, among other things.

Since 1852 he sought the position of the senior building councilor and from 1873 the secret building council, which he should also exercise. At the same time he was still professor of architecture at the University of Giessen and later also its rector .

Hugo von Ritgen was a co-founder of the Germanisches Nationalmuseum, founded in 1852, and was a member of the board of directors and the committee of scholars until his death.

During his activities at the Wartburg he also carried out other large and small restoration projects. He restored the medieval Gleiberg Castle near Gießen and restored the small chapel in the old cemetery in Gießen. He also built new buildings: in 1859, Franz von Sayn-Wittgenstein-Berleburg , the brother-in-law of Count Karl von Schlitz , commissioned him to build Berleburg Palace in Schlitz .

From 1868 he restored the Commander Church of the Johanniterkommende in Nieder-Weisel near Butzbach .

He also received orders for the conversion of historical buildings: for the Ober-Wegfurther Church (near Schlitz ) he drew the conversion plans in 1877, but they were never implemented.

On November 29, 1883 Hugo von Ritgen took over the chairmanship of the Upper Hessian Association for Local History . 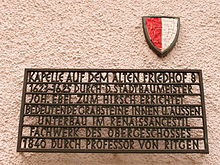 Annual report of the Upper Hessian Association for Local History