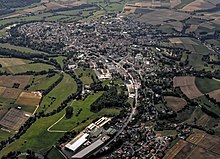 Schlitz is a small town in the east of the central Hessian Vogelsberg district . Due to the five castles in the city, Schlitz is known beyond Hesse and is therefore also known as the romantic castle town of Schlitz .

The town of Schlitz is located on the Schlitz river just before it flows into the Fulda . In terms of area, with 142.09 km² it is the fourth largest city in Hesse after Frankfurt , Wiesbaden and Oberzent .

Schlitz view of the old town

The oldest surviving mention of Schlitz comes from 812.

In the Middle Ages and early modern times, the lords of Schlitz built a lordship from fiefs that they had received from the Fulda bishopric . With the introduction of the Reformation in 1546 and as a result of the Thirty Years' War , they broke away more and more from Fulda. In 1806 the sovereignty of the Schlitz rule fell to the newly formed Grand Duchy of Hesse in the course of the formation of the Rhine Confederation and the mediatization of the Counts of Schlitz . As a result, the Schlitz rule was a Hessian class rule , which included 16 villages in addition to the town of Schlitz.

In Schlitz, the Schlitzer ordinances from the 18th century, together with parts of the Fulda law, were considered particular law . The Common Law applied only to the extent these special regulations did not contain provisions for a fact. This special right retained its validity during the affiliation to the Grand Duchy of Hesse in the 19th century. In judicial practice, however, the ordinances were only rarely applied. The particular law was replaced on January 1, 1900 by the civil code that was uniformly valid throughout the German Empire .

Linen weaving was an important handicraft branch up to the middle of the 19th century, in 1823 there were 176 linen weavers.

The head of the Schlitz district is Thomas Landgraf (as of October 2014) .

There are city ​​partnerships with the following cities:

The city has an outdoor swimming pool, a campsite and a three-field sports hall. There are two quarry ponds in the Pfordt district.

Slot in the movie

A special feature is the so-called Burgenring - the inner city area of ​​the town of Schlitz, which, lying on a hill, with its collection of castles, towers, mansions, the town church and many half-timbered houses, represents a well-preserved, closed historical ensemble. Because of the castle ring and the scenic location of the city, Schlitz was called the "Hessian Rothenburg" in earlier times.

From 1951 to 2006 the Schlitz river station was located in Schlitz , a working group of the Max Planck Institute for Limnology , which researches the ecology of the Breitenbach in the two nature reserves Breitenbachtal and Breitecke . A large number of studies and publications have made the Breitenbach one of the best researched and documented rivers in the world. In 2006 this research station was closed with the retirement of the scientific director of the Max Planck Society.

From 1972 to 1998, a private zoo was operated under the name Schlitzerländer Tier Freiheit , which was repeatedly criticized for not keeping its bears in a species-appropriate manner and for insufficient care.

Schlitz can be reached for long-distance traffic via the A 7 via the Hünfeld / Schlitz exit. The cities of Fulda and Lauterbach are nearby .

There is a lending library, a music school, a community center and an outdoor pool.

In chronological order by year of birth

In chronological order by year of birth

Wikisource: Pieces of files in matters of the city of Schlitz against the Count zu Schlitz gen [annt] Görz and his advice Bingel  - sources and full texts