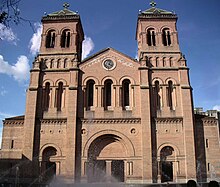 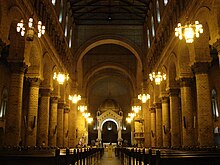 The Catedral Basílica de Nuestra Señora de la Inmaculada Concepción or Catedral Metropolitana de Medellín ( German  Cathedral Church of Our Lady of the Immaculate Conception or Archbishop's Cathedral of Medellín ) is the main church of the Colombian city ​​of Medellín .

The cathedral is the seat of the Roman Catholic Archdiocese of Medellín . With an area of ​​5000 m² and a height of 53 m, it is the largest adobe building in the world. The first plans for the cathedral as the successor to the Basilica of Our Lady of Candelaria go back to 1868 when the seat of the archbishop was moved to Medellín. The construction, under the direction of the French architect Charles Émile Carré, took 41 years. The building was consecrated in 1931. In 1948 it was also given the title of minor basilica .

The church building has the plan of a Latin cross and was built in the neo-Romanesque style. The three-aisled basilica has its main gate facing south, the semicircular apse opposite to the north. The transept ends with two side altars . In this cathedral there is a romantically arranged large three manual organ , which was installed by the Ludwigsburg organ builder Oskar Walcker after completion. With the support of the Federal Republic of Germany, it was restored by the German organ building workshop in Oberlinger in 2009/2010 so that it could also be used for organ concerts.