The title of this article is ambiguous. Further meanings are listed under Medellín (disambiguation) .

Medellín is currently changing. Formerly known for its drug cartel and the high crime rate, it has developed rapidly since then and was named the most innovative city in the world by the Wall Street Journal in 2012 . The “City of Eternal Spring”, as it is called due to its year-round sunny and warm climate, has increasingly developed into a showcase project for all of Latin America.

Medellin is located in the Aburrá valley, a valley of the central mountain ridge of the operand in the northwestern Colombia, at an altitude of 1538  m . Medellín is therefore also called Capital de la Montaña , the capital of the mountains.

The metropolitan area of ​​Medellín consists of the following cities (from south to north):

The city is famous for its gardens, flowers and the variety of orchids that are native there. That is why it has the nickname Capital de las Flores ("Capital of Flowers").

The district Sierra was 2005 documentary La Sierra devoted. It is about the young fighters of the Bloque Metro gang who try to defend their neighborhood in an internal armed conflict .

Administrative division of the city 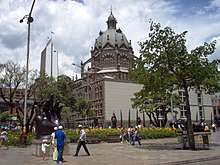 Spanish conquest of the valley 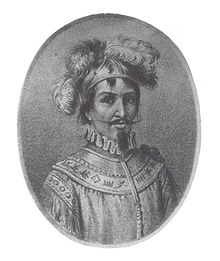 In August 1541, Marshal Jorge Robledo was in the place now known as Heliconia when he looked in the distance and saw what he thought was a valley. He sent Jerónimo Luis Tejelo to explore the area, and on the night of August 23, Tejelo reached the plain of what is now the Aburrá Valley. The Spaniards named the valley "Valley of St. Bartholomew". However, due to the local textile decorations, this was soon changed to the local name Aburrá, which means “painter”.

In 1616 Francisco de Herrera y Campuzano founded a settlement with 80 indigenous people and called it Poblado de San Lorenzo, today "El Poblado". In 1646 a colonial law ordered the separation of indigenous peoples from mestizos and mulattos , so that the colonial administration began building a new town in Aná, today's Berrío Park , where the church of Nuestra Señora de la Candelaria de Aná was built.

Medellín's importance and prosperity had its origins in the production of coffee since 1880 and its ever-increasing demand. 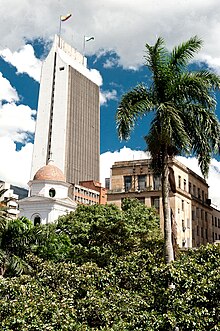 The industrialization of the area began at the end of the 19th century. However, the city did not develop into an important industrial center until the 1930s . In the 1980s , the city's public life suffered from the drug mafia of the Medellín Cartel , which played a leading role in the global cocaine trade .

The name of the city is also associated with the II General Assembly of the Latin American Episcopate from August 24th to September 6th, 1968, on which the Catholic Church of the subcontinent took a historic turn and declared itself an option for the poor . See Liberation Theology .

Most recently, the city administration upgraded the poorest parts of the city through architecturally demanding building programs, which earned the city the “ Most Innovative City of the Year” award from the Urban Land Institute .

The population of Medellín is largely made up of the descendants of Basque immigrants and Sephardic Jews . The inhabitants of the city call themselves medellinenses and those of the Antioquia department call themselves paisa . 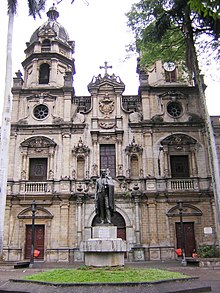 Medellin is known beyond the borders of Colombia for its festivals; these include:

Atanasio Girardot Stadium during a game at the 2011 FIFA U-20 World Cup.

In the city there are companies in the textile industry , clothing, the food and tobacco industry , the manufacture of agricultural machinery, the metallurgical and chemical industry, cement manufacture , the furniture industry and other branches of industry. Medellín now ranks second in terms of national industrial production and first in South America in terms of textile production. In the meantime, however, a very broad tertiary sector has developed alongside industry. Another economic mainstay is flower production. Orchids are mainly grown for export to the USA, Europe or Asia. In honor of this important industry, Medellín has been holding the Feria de Flores since 1957 . 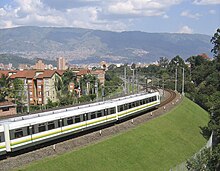 Line B in the San Javier sector of the Medellín Metro

Medellín is the only city in Colombia with an elevated railway (opened in 1995) that connects it with its surroundings. The Metro de Medellín has two lines with a total of 42 km of rail network. The city also operates two cable car lines to the slums of Santo Domingo and San Javier as well as the Ayacucho tram , a track-guided overhead line tram line based on the Translohr system . The cable cars transport around 100 million passengers each year. The operation and its expansion are financed through the UN concept for climate protection through emissions trading. Since the cable car system saves around 20,000 tons of CO 2 annually , the city is able to sell corresponding emission certificates. The effects of the cable car system are rated positively in terms of exhaust emissions, crime and structural changes in the poor areas included.

The city won the Sustainable Transport Award in 2012 .

There are also international flights to Enrique Olaya Herrera and Rionegro Airports .

The Tecnológico de Antioquia has existed since 1983 .

A large-scale education campaign was started under Lord Mayor Sergio Fajardo Valderrama , for example the library and the surrounding complex Parque Biblioteca España in the slum of Santo Domingo was built for six million US dollars .

The German School Medellín in Itagüí , which was given an excellent acoustic as well as architectural point of view for 600 visitors at the beginning of 2011, on whose big stage with a pipe organ completed in 2012, all concerts are performed with original instrumentation and line-up, also made it particularly important can.

The statistics report more than 45,000 homicides in the period 1990–1999. It was only after paramilitary militias were driven out and disarmed at the end of 2003 that the murder rate fell drastically from 6,658 cases (1991) to 778 cases (2004) and was thus below the average in other major Latin American cities. Medellín hit its lowest homicide rate in August 2007.

Capitals of the Colombian departments