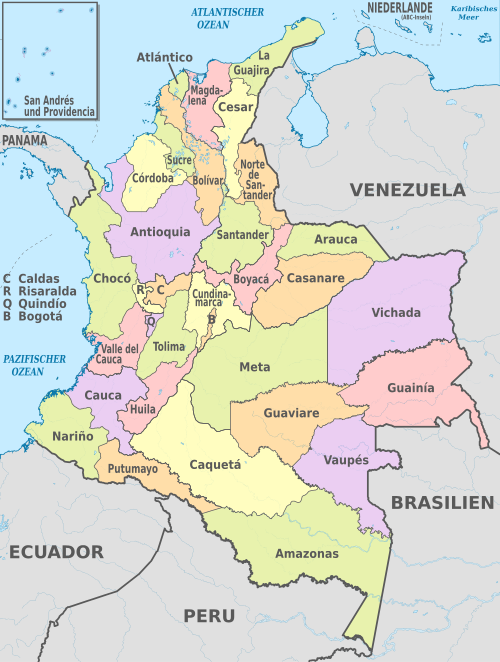 Colombia and its departments plus Bogotá

As departments in to Colombia 's political administrative areas designated, into which the country is divided. These administrative units are roughly comparable to the French départements , but have fewer competencies than e.g. B. the provinces of Italy.

Colombia is politically divided into 32 departments and a capital district (Distrito Capital), which includes the capital Bogotá . Each department has a governor (Gobernador) and a departmental council (Asamblea Departamental) who are elected by the people every four years. The governor cannot be re-elected for an immediately following term. Bogotá is an exception as a capital district; Although it has its own district government (Concejo Distrital) and a Lord Mayor (Alcalde Mayor) who is equal to the head of government , it is still dependent on the Department of Cundinamarca in certain respects .

The departments are further subdivided into municipalities (Municipios) , which are governed by a popularly elected mayor ( Alcalde ) and a local council (Concejo Municipal) . In the inaccessible regions in the east and south, which only received departmental status in 1991, these municipalities have very large areas of up to 30,000 km².