Munk's parents Carl Emanuel Petersen, a master tanner with his own business, and Ane Mathilde Petersen, née Christensen, died when Kaj was still very young. As an orphan he was adopted by his childless relatives, Peter and Marie Munk, small farmers in Opager near Maribo, and given their name. His new parents joined the Inner Mission Awakening Movement . The piety of his new parents, especially his mother Marie, who was handicapped by a leg problem, had a decisive influence on him. His elementary school teacher, Martinus Wested, and a young pastor in the community, Oscar Geismar, people educators in the sense of Grundtvig , encouraged his literary talent. They imparted Christian values ​​to him and awakened in him the joy of history and literature . Since 1914 at the cathedral school in Nykøbing Falster , he got to know the dramas of Henrik Ibsen and wrote his first cycles of poetry and dramas. After graduating from high school in 1917, he began studying Protestant theology in Copenhagen , but also wrote other works, the first of which were published. He considered dropping out of college and becoming a writer , but refrained from doing so (also out of consideration for his parents). Study trips took him to Germany and Czechoslovakia .

After passing the exam, Munk was ordained on May 25, 1924 and introduced as pastor in Vedersø near Ulfborg on June 1 . In the village on the west coast of Jutland, he was a popular pastor until his murder in 1944. In 1929 he married the local Elise Jørgensen, with whom he had five children: Yrsa, Helge, Arne, Solveig and Mogens. He also continued his literary work here. In 1928 the Royal Theater in Copenhagen first played its play En Idealist ("An Idealist") about Herod the Great . This made him known as a playwright. The play Cant (also premiered at the Royal Theater in 1931) earned him wide recognition. From 1931 he also wrote for the daily Jyllands-Posten and other Danish newspapers.

Two plays in particular established his fame: Ordet (“Das Wort”, 1932) plays among the peasants of a Jutian village and deals with the incomprehensible, early death, belief in the miracle of the resurrection, reason and madness. The occasion for this spectacle was an event in Kaj Munk's community in 1925, which shook him deeply. A young peasant woman, Marie Sand, and her child died in childbed. Her grave is to the southwest of Vedersø Church. In 1955 the Danish director Carl Theodor Dreyer created the film "Ordet" based on Munk's drama .

The other play Han sidder ved Smeltediglen ("He sits at the melting pot", 1938) deals with the persecution of the Jews in the Third Reich and accounts for the unsuccessful attempt by some German scholars to make the Jew Jesus an Aryan. By the beginning of the Second World War, more than 160,000 spectators saw this spectacle and heard what a German theologian reproached a National Socialist minister with:

“A Jew taught my German mouth to pray every morning and every evening: 'Forgive us our debts as we forgive our debtors.' Give the Jews the right to live in our people. Because taking away human rights from other people means making yourself a criminal. "

Munk also became a widely read columnist for the major Danish daily newspapers in the 1930s. In eleven years he published more than 600 articles on all sorts of topics from church, culture and politics. He saw parliamentarism in its form after the First World War as unsuitable for the development of a people; he clearly expressed this conviction in word and writing. On the other hand, he saw in the formative power of Mussolini's fascism in Italy a historical factor of order, which he considered desirable as a model for the development of Scandinavia . The economic improvement in Germany under Hitler after 1933 also seemed to point in the same direction. Munk was of the opinion that sincere leaders with idealism and persuasiveness can set positive developments in motion in their people. Because of this it was quite controversial in Denmark.

In the drama Sejren (“The Victory”, 1936), Munk once again takes the side of the dictatorship. Inspired by Mussolini and his Abyssinian War, a peace-loving dictator is driven into the war by his environment, which Munk disguises as sacrifice, bravery and heroism. The dictator wins the war, but because of his wickedness he is murdered by his wife. She believes she is doing the will of God and is encouraged by a monk. Kaj Munk's view of the world is as religious as it is inhumane. His belief in the political leader is greater than sympathy for his victims.

He commented increasingly critically on developments in National Socialist Germany. While he had initially argued that the anti-Jewish measures had a certain justification, the increasing brutalization of German Jewish policy outraged him more and more. On November 17, 1938 - a week after the November pogroms - his open letter to Mussolini appeared in Jyllands-Posten . In it Munk implored him to dissuade Hitler from persecuting the Jews. They are unworthy of a great civilized people. But the actual addressee of the letter was the Danish public. The vast majority of Danes reacted in horror to racial ideology and anti-Semitism . They never met with any appreciable response in the country; As a markedly conservative, Munk now fitted into this mood.

After the occupation of Denmark on April 9, 1940, Munk became involved in the resistance against the German occupation forces . His public protests were sharp. He refused the collaboration of many of his countrymen. On the contrary, Denmark should follow the Norwegian example and not shy away from violence. He promoted this in his play Niels Ebbesen . The historical Niels Ebbesen murdered Count Gerhard III in the 14th century . from Holstein ; as a result, the Holstein influence on Jutland could be pushed back. Kaj Munk read his manuscript publicly in many places. The Danish underground movement distributed the text of the play in thousands of copies.

Munk's sermons from these years also contain unmistakable calls for resistance. These sermons were published in two volumes in 1941 and 1942, and by the end of the war they had five editions with a total of 25,000 copies. Many of these books ended up in Norway and encouraged resistance there too. Munk was well aware that his frank word put his life in danger.

"The Church is the place where injustice must be put under a spell, lies exposed, poisonous wickedness denounced - the place where mercy is to be exercised as the source of life, as the heartbeat of humanity."

Reasons for the murder 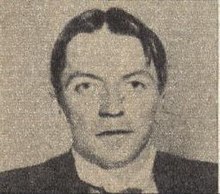 “If one starts the persecution of a certain group of our compatriots here in this country, only for the sake of their origin, then it is the Christian duty of the church to shout: 'That is against the basic law in the kingdom of Christ, mercy, and that is detestable for any free Nordic thinking. ' If that happens again, then with God's help we will try to stir up the people. For a Christian people who stand idly by when their ideals are trampled upon, let the deadly germ of decay enter their minds, and God's wrath will strike them. "

These sentences come from the sermon Munk delivered on December 5, 1943 in Copenhagen Cathedral . At that time he was a member of the opposition party Dansk Samling ("Danish Collection"), for which he had advertised in the election for the Folketing . He was undesirable in the Danish capital and was actually not allowed to enter the pulpit. At the request of his official brother, he nevertheless delivered the sermon, and in it he threatened to revolt because of the persecution of the Jews by the Germans.

One month later, on January 4, 1944, Munk was arrested by an SS detachment in the rectory in Vedersø. His wife Lise stayed behind with the five children. In the Hørbylunde forest to the east of Silkeborg, he was shot on the orders of Heinrich Himmler . With this compensatory murder , the Danish resistance against the German occupation was to be weakened. It was the first terrorist action by the Peter Group under the leadership of Otto Schwerdt . On January 8th, Munk was buried in Vedersø with great public sympathy.

The investigation by the Danish police quickly led to the perpetrators, who could not be questioned or arrested. A copy of the preliminary final report of the homicide squad was distributed as a leaflet by the resistance movement in 1944. Munk became a martyr of the Danish resistance movement. 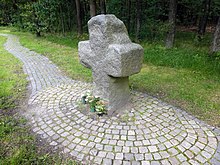 Granite cross at the site of the murder

He is still unforgotten in the collective memory of Denmark, although the assessment of his literary work and his political convictions has fluctuated widely over the decades.

The graves of Kaj Munk, his wife Lise, née Jørgensen, and their son Helge are located on the side of the choir of St. Sebastian's Church in Vedersø. On the main street in front of the cemetery there is a monument with the bust of Kaj Munk. In the aisle of the church there is a plaque with his favorite chorale:

I await you, Lord Jesus, for judgment;
every moment i'm looking for it.
You can come quickly and unexpectedly
at any hour of the day or night
Let my heart's lamp be ready and burn
in faith, in hope and in love.
When I sleep or wake up, I am yours
if I live or die, you are mine.
And when you come, come tender and gentle
and make me happy forever.
(Den Danske Salmebog, No. 269)

On highway 195 near Hørbylunde four kilometers from Silkeborg, a memorial cross marks the place of execution. Friends put another memorial stone on the Ravnsbjerg south of Linde near Holstebro . The inscription reads:

Kaj Munk died on January 4th, 1944 for his fatherland. Some have to sacrifice themselves so that others can live.

In the town of Kappeln in northern Schleswig-Holstein , the local Danish school is named after Kaj Munk. The Evangelical Lutheran Church in America commemorates Kaj Munk with a memorial day on August 14th .

In German and English