with the electrical power and the duration , - or with variable power

The terms Joule heat and electricity heat are not used uniformly, partly in the sense of energy, partly of power.

Electricity heat in an electrical line

A current is preferably carried in an electrical line . The electrical power is always an active power in connection with heat generation . It results from the current strength  and the voltage dropping along the conductor as a result of the conductor current (the formula symbols apply to direct quantities as well as to the rms values of alternating quantities) 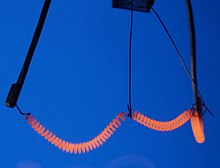 As a result of a current flow, the double helix is heated to the point of red heat

Since the voltage is created by the ohmic resistance of the conductor, Ohm's law applies

This means that the heating (e.g. in an electrical line, a transformer or a heating resistor ) increases with the square of the current strength

Since the conductor becomes warmer than its surroundings, it transfers thermal energy through thermal conduction , thermal radiation or convection . If the energy supply is constant and constant, a state of equilibrium is established at an increased temperature, in which the emitted heat flow ( heat per time span, i.e. a thermal power ) equals the consumed electrical power:

In general, bodies have such a thermal inertia that when the current is stationary, the temperature difference is established as a constant variable, even when heated by alternating current . A temperature or brightness fluctuation with twice the frequency of the alternating current can only be observed with a very small ratio of mass to surface, as in the case of the double helix shown.

If a conductive substance distributed over a larger volume is flowed through by a current, a current of strength flows through a surface element

on its way along a path element a tension

The loss of electric power results in the volume element to

Metallic conductors have a specific electrical resistance that is largely independent of current (but temperature-dependent). In semiconductors is not constant. In superconductors is , there arises no current heat.

leads. In the case of a more complicated geometric design with non-uniform current distribution, this must be done, for. B. calculated using the finite element method in order to determine the power loss and the macroscopic resistance of the conductor.

A current-dependent resistance can be found in materials with non-constant resistivity . The calculation of the electricity heat loss through is then valid in this way.