Karsee is a redirect to this article. For further meanings see Karsee (disambiguation) 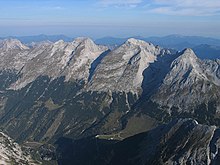 Kare in the ridge of the northern Karwendel range

Section through a Kar glacier 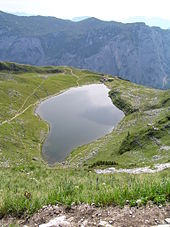 Augstsee with the characteristic location on the edge of the Karschwelle

Cirques are essentially excavated ( exaration ) by the glacier ice moving down into the valley and the rocks ( debris ) carried by it at the base . The back walls of the karst are steepened above all by frost blasting in the edge fissure, the edge between the rock face and the glacier that is not covered by ice. The rubble loosened here by moisture and frequent changes in frost is then removed by the glacier. Especially in its center, where the thickness and movement of the ice are greatest, the bottom is planed; the Karmulde is created , which ends at the Karschwelle and merges into the surrounding relief. The Karschwelle often coincides with the terminal moraines of the Kargletscher. Cirques are therefore mainly due to the formation processes in the erosion area of ​​a glacier.

Kar glaciers form where more snow collects locally than in the surrounding area. In terrain with a strong relief, cirques therefore occur mainly on slopes facing away from the sun. With larger summit plateaus , cirques also pile up in the leeward areas , where additional snow can accumulate. In the low mountain ranges of the northern west wind zone, such as the Black Forest, the cirques are mainly oriented north to east. Exposures in directions other than north-east are not uncommon. If the back walls of opposite cirques intersect over time, mountain ridges form, the highest parts of which are sharpened mountain peaks like the Matterhorn , so-called karlinge .

Experience has shown that the altitude of Karschwellen almost coincides with the altitude of the respective orographic snow line , so that if there is a larger number of ice-free karen in an area, it can be concluded that the snow limit was earlier. The exposition independent to determine (climatic) snowline that Karhöhen to be averaged opposite directions. In the opposite case, if cirques are hidden under the ice of the nutrient area of larger glaciers, they are witnesses of Holocene phases with less glaciation than today. In phases of very strong glaciation, Kar glaciers, on the other hand, are rarer and then of less importance for paleoclimatology . Cirques that have become free of glaciers belong to the subnival level or lower altitudes.

Cirques are characterized by steep, armchair-shaped cirque rear walls and a curb with a leveled ground. In the case of the particularly prominent Karen, rock faces shape the Karwand, and the Karmulde is over-deepened like a basin. Except for permeable rock base (loose material, karst rocks) they are then of cirque lakes filled, which, however, already zusedimentiert or vermoort can be. The valley end can be formed by a rocky Karschwelle ( Karriegel ) or by loose material from terminal moraines of the former Kargletscher. The outflows from cirque lakes with damming moraine walls have sometimes cut these walls up like gorges or even let them break through, after which the cirque floors may have fallen completely dry (example: Nonnenmattweiher ).

The loamy ground moraine of the former glacier often seals the underground of the Kars, so that karst lakes can also occur in karst areas. Many karst soils that are not deepened are also characterized by moisture, on the one hand because the slope water converges there and on the other hand because spring horizons facilitate the formation of karst soils. In the Karkessel, which is rich in fine material, there is often good grazing ground and open water, which is why Kare are preferred alpine pastures , especially in arid, for example karstified, surroundings.

The surrounding slopes are below the cliffs mostly of debris and boulders covered. The debris feet reaching down into the boiler combine in their lower part to form a common debris surface. Here the material usually remains stable enough for the formation of a rubble soil ( Syrosem ) with good conditions for woody vegetation. In the lower elevations of the low mountain range, cirques are predominantly forested, with the exception of rocky slopes and coarse debris heaps.

After the forming glacier has melted, cirques are fossil forms of terrain. Subsequent reshaping through burial under block heaps or erosive cutting up can blur the typical relief features that make the difference to funnel valleys. Their shapes are more likely to be preserved in low mountain ranges with their somewhat less dynamic form than in high mountain ranges. Karst rock, which drains the erosive surface water underground, also contributes to maintaining the shape.

A fundamental distinction to be made between Karen and similar looking, but mostly larger basin shapes, which arise further down the valley in the course of large glaciers, especially where the ice forms a glacier tongue or where ice streams converge. After the glacier has melted, distinctive valley ends of trough valleys remain in one case or valley steps (so-called confluence steps ) in the other . In both cases, the collapse of ice masses from different directions creates an area of ​​increased deep erosion and glacier thickness.

Multi-level cirques are not always easy to distinguish from a sequence of smaller valley steps. With them, smaller cirques have formed in moderately sloping upper slopes of large cirques during phases of low glaciation. Transitional forms between valley glacier KAR and can send a sequence of karartigen wells produce, so-called Treppenkare . They are formed due to the changing dynamics and erosion performance of the ice, but not due to the different thicknesses of the glaciers that meet.

In rare cases, the shapes of the glacial backfill area can be confused with karen, for example in the case of glacier lakes at the foot of valley steps, dead ice holes (hollows of caves over buried glacier remains) on slopes or hollow shapes at the upper edge of landslide masses . There are also mixed forms with karst forms such as sinkholes (example: Lai da Gonda Grossa on the Lischana glacier ) or with volcanic forms such as side craters .

Kar is probably related to the Old High German char 'vessel' , 'dishes'. It is also common in the Bavarian-Tyrolean area as Kår , diminutive Karl . In Tyrolean terms, the word also stands for “surroundings of the alpine hut”, but also “mountain top”, towards the east generally for “alpine basin ”, in Carinthia generally for “ pasture ground ” or even “ hunting ground ” ( Koralpe ). There is probably a relationship to the Slovenian word Kras , Croatian Krš , 'thin soil' , from which the word karst is derived, but also with ' swamp ', Scottish kair , Icelandic ker , Danish kär , kjär , Norwegian kjerr , Swedish kärr . Nevertheless, the meaning is mixed with an early pan-European root car , generally ' rock ', to which the reference to rubble slopes , as well as the weathering form Karre (mostly decimeter-wide, parallel channels in the surfaces of karstable rocks) can be traced back.

In Scotland and Ireland the related corries is used as a name, in Wales cwms ("kuhms"), in the north of England coombs for such kettle shapes (whose glacial origin John Ball recognized in 1849 ).

In Sweden they are called botn (plural botner , vessel, related to vat ).

In the Pyrenees , cirques are called oules 'circus valleys', in the High Tatras the Karseen (mountain lakes) are called pleso or plesa (Pl.) In Slovak , oko or staw in Polish , or stawy (Pl.).

Related by name are the Karwendel (where most of the summit names are derived from Karen like the Große Seekarspitze ), the Koralpe or in South Tyrol the Karersee (no Karsee).

Aerial view of the Mummelsee on the Hornisgrinde (Northern Black Forest)

There is a large card tree in the plateau-rich northern Black Forest , the most famous of which is the Mummelsee , similar to the Feldsee in the higher southern Black Forest . Particularly deep cirque lakes are the Lac Blanc 'White Lake' in the Vosges with a depth of 60 meters and the Černé jezero 'Black Lake' in the Bohemian Forest with a depth of 40 meters. A particularly typical cirque in the northern low mountain ranges is the steep-wall cirque in the Harz Mountains .