The title of this article is ambiguous. Further meanings are listed under Matterhorn (disambiguation) .
pd5

The mountain stands in the Valais Alps between Zermatt and Breuil-Cervinia . The east, north and west walls are on Swiss territory , the south wall on Italian territory.

History of the name

In general, the mountain peaks got their names late in the mountains, but the pass crossings and Alps below mostly earlier. In 1545 Johannes Schalbetter named today's Theodul Pass as "Mons Siluius" (German translated Salasserberg) or German Augsttalberg. With Augsttal the valley of Aosta (Latin Augusta Praetoria Salassorum) is meant, the Aosta valley .

"Siluius" was then very likely misinterpreted in terms of folk etymology via the supposedly Latin "silvius" and "silvanus" to French and Italian "Cervin / Cervin (i)". In 1581 the Matterhorn was first mentioned as Mont Cervin , as did Mons Silvanus and Mons Silvius later . In 1682 Anton Lambien called today's Matterhorn Matter Dioldin h [orn] (Matterhornspitze) to demarcate it from the pass of the same name, which was still called “ Matterjoch ” until the middle of the 19th century (for example on the Dufour map ).

In the local population, the mountain is also called ds Hore (= the Horn, Zermatt dialect) or ds Horu (= the Horn, Upper Valais dialect).

The Matterhorn is a karling , and its characteristic shape was created by erosion and glacier grinding in the ice ages . The Matterhorn is part of the Dent Blanche Nappe of the Lower Eastern Alps , i.e. a piece of debris of an Eastern Alpine overburden pushed far to the west onto the Pennine nappes of the Western Alps . The lower rock layer of the Matterhorn, which extends up to the height of the Hörnlihütte , is Penninic, i.e. western Alpine. The comparatively small horn itself sits on this base and belongs to the Dent-Blanche ceiling, namely the lower part up to the "shoulder" of the Arolla series made of orthogneiss and metagabbros and the uppermost part of the Valpelline series made of highly metamorphic paragneiss the Dent Blanche ceiling. To put it simply, the Matterhorn consists of two different, sloping rock packages. Today's Matterhorn glacier only emerged again in the pessimum of the migration period after the optimum of the Roman period .

A special feature is the characteristic "Matterhorn cloud". It is an outstanding example of a type of cloud that meteorologists refer to as a banner cloud : like a mighty flag, the cloud forms on the leeward side of the summit as an almost constant companion of the mountain. The most plausible explanation for its origin is the following: The Matterhorn towers over the surrounding mountains like a tower, so that leeward vortices form on it, which lead the moist air from the valley upwards, where condensation and cloud formation occur. Once the peak level has been reached, the cloud is captured by a horizontal branch of the leeward vortex, which leads to the typical flag shape ( leeward vortex hypothesis ).

Accident on the Matterhorn July 14, 1865, legal basis and decision of the Visp District Court

Since 1857, several unsuccessful attempts have been made to climb the Matterhorn, mostly from the Italian side. The Englishman Edward Whymper once fell about 60 meters.

In 1862 John Tyndall climbed the southwest shoulder for the first time with the guides Johann Josef Benet , Anton Walter, Jean-Jacques and Jean-Antoine Carrel , today's Pic Tyndall. The continuation of the ascent along the Lion Ridge seemed impossible to them. Whymper still saw the Lion Ridge as not feasible. He therefore tried to persuade his friend Jean-Antoine Carrel to climb from the Zermatt side. He insisted on going up from Italy.

In July 1865 Whymper learned by chance from an innkeeper in Breuil-Cervinia that Carrel - without notifying Whymper - had gone back to the Lion Ridge. Whymper felt misled and hurried to Zermatt to put together a group there for an immediate attempt over the Hörnligrat. On July 14, 1865, the 7-person Whympers rope team made the first ascent . The group climbed onto their shoulders over the Hörnligrat, and further up, in the area of ​​today's fixed ropes, they dodged into the north face.

Edward Whymper was the first to reach the summit because he cut himself off the rope before the summit and ran ahead. He was followed by the mountain guide Michel Croz (from Chamonix ), Reverend Charles Hudson , Lord Francis Douglas , D. Robert Hadow (all from England) and the Zermatt mountain guides Peter Taugwalder father and Peter Taugwalder son. Carrel and his group spotted them far below on Pic Tyndall. During the descent of the first climbers, the front four of the rope team (Croz, Hadow, Hudson and Douglas) fell fatally above the so-called "shoulder" over the north face. On Saturday, July 15, 1865, on Sunday, July 16, 1865, and in the days that followed, Josef Marie Lochmatter and the rescue teams set out to provide first aid to the victims of the first ascent. A rescue team was able to recover three of the dead on July 19 on the Matterhorn glacier. Lord Francis Douglas' body was never found.

On July 17th, Carrel, together with Jean-Baptiste Bich and Amé Gorret, also managed the ascent over the Lion Ridge to the summit by traversing from the northern end of the Italian shoulder through the uppermost west face to the Zmutt Ridge (so-called Galleria Carrel) and climbing over this completed.

The anniversaries of the first ascent of the Matterhorn are celebrated in the present. On the occasion of the 100th anniversary on July 14, 1965, Swiss television showed an international live broadcast of a Matterhorn ascent with the participation of mountain reporters from the BBC and RAI. On June 30, 1965, Swiss television showed the specially produced documentary Bitter Victory: The Matterhorn Story (director: Gaudenz Meili ). On the occasion of the 150th anniversary, a countdown clock was set up on the Bahnhofplatz in Zermatt on July 14, 2015, and in December 2014 a meeting point for the anniversary year, the so-called “Matterhorn Plaza”, was set up in the center of the city. 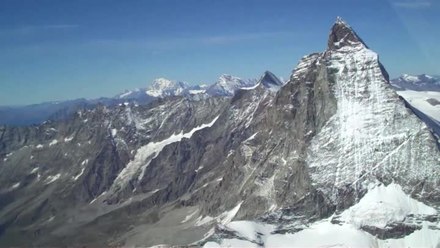 The most frequently used ascent route is the Hörnligrat from Zermatt via the Hörnlihütte (northeast ridge, ZS +). It represents the so-called normal route, i.e. the easiest ascent. At 4003 meters above sea level, northeast below the summit, there is a bivouac for emergencies, such as sudden weather changes and delayed weather, the Solvayhütte , which is looked after from the Hörnlihütte and has 10 emergency camps. There are other ascent routes on the southwest ridge over the church roof-like Pic Tyndall (also known as the Lion Ridge or Italian Trail , ZS +), on the northwest ridge ( Zmuttgrat , S) and on the southeast ridge ( Furggengrat , SS, little used). There is also an ascent route through the forbidding north face. B. Walter Bonatti , is elected.

Routes over the ridges

In 1992, Hans Kammerlander and Diego Wellig managed to climb the Matterhorn four times over its four ridges in 23 hours and 26 minutes.

Routes through the walls 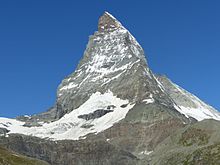 2500 to 3000 mountaineers try to conquer the summit every season, over 100 mountaineers on peak days. 70% of alpinists choose the easiest and most famous route over the Hörnligrat. Around 80 rescue missions must be carried out by helicopter per season.

Since the first ascent, not a year has passed without a fatal accident on the Matterhorn. Eight to ten people die in accidents every year. Over 500 people have died on the Matterhorn since the first ascent more than 150 years ago, the majority of them on the Swiss side. No other mountain in Switzerland has so many mountaineers dying. Between 1981 and 2011, 223 alpinists were killed on the Swiss side, 207 of them from falls, 5 from falling rocks, 3 each from frostbite, falling into a rope or as a result of a search. 21 fallen alpinists have not yet been recovered and are still missing.

It took the Italian Bruno Brunod 2 hours and 12 minutes to climb in 1995. The Spaniard Kilian Jornet broke this record in 2013 and climbed the mountain from Italy in 1 hour and 53 minutes. Including the descent, Jornet achieved a time of 2 hours and 52 minutes.

On April 22, 2015, the Swiss Dani Arnold undercut this record by a full 7 minutes. He managed the fastest solo ascent of the Matterhorn north face in 1 hour 46 minutes.

The Zermatt mountain guide Richard Andenmatten has climbed the Matterhorn over 850 times.

The Zermatt mountain guide Ulrich Inderbinen climbed the Matterhorn 371 times, most recently at the age of 89.