Toblerone products in a department store

Toblerone is a Swiss chocolate brand that has been produced by the US manufacturer Mondelēz International (formerly Kraft Foods) since 1990 and sold in 122 countries around the world. The Toblerone was originally developed by Tobler & Cie. manufactured. The world's only Toblerone factory is in Bern .

The Toblerone has a triangular cross-section and is available in different sizes; optionally as whole milk, dark or white chocolate. It is enriched with Montélim nougat. 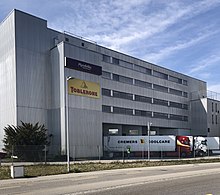 The Toblerone was invented in 1908 by the chocolatiers Theodor Tobler and Emil Baumann . The name is a combination of “Tobler” and “ Torrone ”, the Italian name for honey-almond nougat.

The Toblerone came on the market in the typical prismatic shape. The shape has been legally protected since 1909. There are various legends about the triangular shape of the Toblerone. Mostly it is assumed that Theodor Tobler was inspired by the local mountains, namely the Matterhorn with its characteristic triangular shape. According to Theodor's sons, however, dancers from the Parisian revue Folies Bergère , who had formed a pyramid in their red and cream-colored dresses during a performance, were a model for the Toblerone.

The original logo on the packaging showed an eagle with the Swiss and Bernese flags in its claws, with a mountain backdrop behind it. It was not until the 1960s that the Matterhorn appeared on the small side triangle. In 2000 it moved to the long side of the Toblerone. A bear is hidden in it as a reference to the city of Bern.

In 1969, in addition to the "classic" Toblerone, a further Toblerone product was first introduced in various sizes: the black Toblerone (now called Toblerone Dunkel). The white one followed in 1973, the blue one in the 1990s, the purple Toblerone "Fruit & Nut" with grapes in 2008 and the "Honey & Crisp" variety in 2009.

At the beginning of November 2016, Mondelēz International in Great Britain launched a Toblerone in a special design, with a larger distance between the individual points and thus 10% less weight. The change was justified with higher purchase prices. There was speculation in the media and social networks that this was a consequence of the devaluation of the British pound as a result of the Brexit decision. This led to negative comments in the media. Shortly afterwards, the Toblerone pack sold in Germany was also reduced from 400 to 360 grams. While the English version was reduced from 12 to 9 peaks, the more compact German version was shortened from 15 to 11 peaks. On July 21, 2018, Mondelēz International announced that the British version with the enlarged point spacing would be withdrawn in favor of the original shape, as the change had not been well received by customers. The previous pack size in the UK should be increased from 150 grams to 200 grams. At first nothing was known about the price. 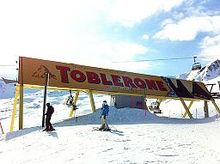 The Tobleroneweg is a line of defense that was built in the 1930s near Gland in the canton of Vaud, Switzerland, and which got its name because the shape of the concrete blocks used as a tank barrier resembles chocolate.

A political scandal in Sweden that became known in October 1995 and centered on the social democratic politician Mona Sahlin was called the Toblerone affair . Among other things, it was possible to prove to her that she had paid for various goods for private use with a business credit card, including some Toblerone bars.

The currently largest three-dimensional Toblerone advertisement in the world is the intermediate exit of the Carmenna chairlift in Arosa, designed in the shape characteristic of the product .

The divider at the checkout registers in supermarkets is called Kassentoblerone in Switzerland .