Whymper as a young man

Edward Whymper (born April 27, 1840 in London , † September 16, 1911 in Chamonix , France ) was a British mountaineer . He gained fame in particular through the first ascent of the Matterhorn and the Chimborazo . 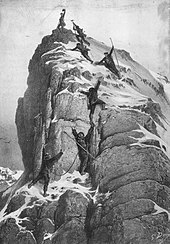 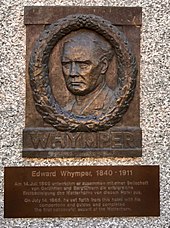 Memorial plaque at the Hotel Monte Rosa in Zermatt

The crash, portrayal by Gustave Doré 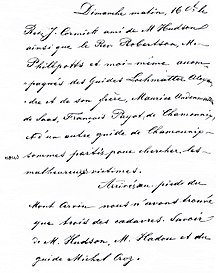 Edward Whymper's answers 12, 13 and 14 of the related interrogation of July 1865, clerk Donat Andenmatten

He achieved the first ascent of the 4478  m high mountain on July 14, 1865. The route he chose led from Zermatt over the Hörnligrat to the summit and is largely congruent with today's normal route. In addition to Whymper, the successful rope team also included his compatriots Lord Francis Douglas , Reverend Charles Hudson and Robert Hadow as well as mountain guides Michel Croz from Chamonix , Peter Taugwalder and his son of the same name from Zermatt. They prevailed in a duel against Jean-Antoine Carrel , who at the same time tried to climb the Lion Ridge from Breuil in Italy .

As the rope team descended, four men fell to their deaths over the north face. The 18-year-old Hadow, who was still relatively inexperienced in the high mountains, slipped, fell on Michel Croz and pulled Charles Hudson and Lord Francis Douglas with him. The rope that connected the falling and the survivors was actually an aged rope, which was only supposed to serve as a reserve; when Taugwalder tried to hold the falling, the rope broke due to the sudden tension. Edward Whymper, father and son Taugwalder returned safely to Zermatt. State Councilor Joseph Anton Clemenz carried out the following criminal investigation. The allegation that Whymper cut the rope could not be confirmed.

Whymper followed up the memories of the accident:

“Every night, do you understand, I see my comrades of the Matterhorn slipping on their backs, their arms outstretched, one after the other, in perfect order at equal distances - Croz the guide, first, then Hadow, then Hudson, and lastly Douglas. Yes, I shall always see them ... "

"Every night, you see, I see my comrades from the Matterhorn sliding onto their backs, their arms outstretched, one after the other, perfectly evenly spaced - Croz the leader first, then Hadow, then Hudson, and finally Douglas. Yes, I will always see you ... "

With the ascent of the Matterhorn, the time of the great first ascent and the so-called golden age of alpinism ends . On August 22, 1874, Edward Whymper climbed the Hörnligrat and thus the Matterhorn for the second and last time in his life under the guidance of Josef Marie Lochmatter from St. Niklaus .

In 1880 Edward Whymper was the first to climb the 6310 meter high Andean volcano Chimborazo in Ecuador. He used the physiological reactions of his own body as a kind of scientific laboratory to research human resilience under changing environmental conditions. From the 5000 meter high refuge named after Whymper, several routes of varying difficulty still lead to the Ecuador or Whymper main summit.

Then he devoted himself to writing and dealt with altitude physiology. In 1901 he ran advertising for the Canadian Pacific Railway in the Rocky Mountains with mountain guides Josef Pollinger from St. Niklaus , Christian Klucker from Engadin, Christian Kaufmann from Grindelwald and Josef Bossonney from Chamonix . The company carried out a total of 15 first ascents. In 1904 Whymper initiated the first ascent of Crowsnest Mountain in the "Rockies". Shunned as an outsider, Whymper died of a stroke in his locked room at the Grand Hotel Couttet in Chamonix in 1911 and was buried in the local Cimetiere Biollay de Chamonix - Mont Blanc.

The second highest peak of the Grandes Jorasses (Pointe Whymper) and the Whymper Couloir on the Aiguille Verte still bear his name . In addition, the Whymper Spur in Antarctica is named after him. Since 1894 he was a member ( Fellow ) of the Royal Society of Edinburgh .