The inactive volcano Chimborazo ([ ˌtʃimboˈɾaθo ], [ ˌt͡ʃimboˈɾaso ]), also in German Tschimborasso , is the highest mountain in Ecuador at 6263 m above sea level .

The Chimborazo is located in the western cordillera of the Andes, approx. 165 km south of the equator , in the province named after it . Its neighboring peak is the 5018 meter high Carihuairazo . The majestic summit of Chimborazo rises 2500 m from the around 3500 to 4000 m high surrounding plateau. Its diameter at the base is about 20 km. In ideal conditions, mostly in the winter months (December – April), the summit can be seen from the coastal city of Guayaquil . The most important cities in its vicinity are Riobamba (about 30 km southeast), Ambato (about 30 km northeast) and Guaranda (about 25 km southwest of the mountain). The Chimborazo lies within the “Reserva de Produccion Faunistica Chimborazo” nature reserve , which serves to protect the habitat for the camelid vicuña , lama and alpaca native to the Andes .

The upper part of the mountain from around 5100 meters is glaciated . Individual arms of the glacier reach down to 4600 m. The Chimborazo glaciers provide the water supply for large parts of the provinces of Bolívar and Chimborazo . The glaciers have lost significant mass in the last decades due to global warming , ash cover as a result of the current volcanic activity of its eastern neighbor Tungurahua (Schotterer et al. 2003) and the El Niño phenomenon.

As with other Ecuadorian mountains, the ice of the Chimborazo glaciers is mined by so-called Hieleros (from the Spanish Hielo for ice) to be sold in the markets of Guaranda and Riobamba. In the past, the ice was transported down to coastal cities such as Babahoyo or Vinces (Borja 2004). Baltazar Ushca is the only remaining Hielero who regularly climbs up to the Chimborazo ice mines.

The volcanism at Chimborazo is the result of the subduction of the Nazca plate under the South American continent and is predominantly andesitic - Dazitic in character. The stratovolcano erupted for the last time around the year 550 (± 150 years).

The Chimborazo is the highest mountain in Ecuador, the furthest north-lying six-thousander in South America and higher than all the more northerly mountains in America including Denali , the highest mountain and only six-thousander in North America. For a long time it was ascribed a height of 6310 m. A differential GPS measurement carried out in 2016 found an altitude of only 6,263 m. Also SRTM data indicate that this height is more likely m as the widespread altitude of the 6310th

There are various theories regarding the origin of the name Chimborazo . It can be a combination of the Cayapa word for woman - Shingbu - and the Kichwa word for ice / snow - Razo - which would result in something like Icy Woman , or with Chimbo for throne / divine throne from the Shuar it would result in Icy Throne of God . The mountain is also called Urkurasu (Urcorazo) by the indigenous people living in the area ; with the Quichua word urku - mountain - that simply results in mountain ice .

In the local indigenous mysticism of the Puruhá , for example , the Chimborazo is a sacred mountain . Taita Chimborazo ( Taita is Kichwa for father) represents the progenitor of Puruhá as the husband of Mama Tungurahua . 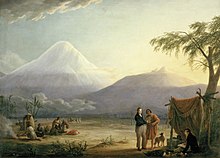 The Chimborazo was first described by a European, Girolamo Benzoni , in 1565 . The French Charles Marie de La Condamine and Pierre Bouguer carried out research on the mountain in 1742. Alexander von Humboldt, together with Aimé Bonpland and Carlos Montúfar, made his first real attempt to climb on June 23, 1802; they reached an altitude of about 5600 m (their own estimate at the time was 5900 m). We owe the first precise description of the symptoms of altitude sickness to the description of the ascent by Humboldt . Humboldt spent several days on the mountain. He sketched it and had himself pictured with it in the background. In December 1831, the naturalist Jean Baptiste Boussingault from France also failed . A British-Italian rope team consisting of Edward Whymper and the brothers Jean-Antoine and Louis Carrel was the first to reach the summit on January 4, 1880. The refuge on the southwest side below the glacier at 5000 m was named in honor of the British "Edward-Whymper- Hut “named. Since many critics questioned the successful first ascent, Whymper climbed the mountain a second time in the same year via a new route (from Pogyos in the west) with the two Ecuadorians David Beltrán and Francisco Campaña (Whymper 1892).

On August 15, 1976 SAETA flight 232 with 55 passengers and 4 crew members was lost on the 309 km route from Quito to Cuenca . Immediate searches in possible crash regions were unsuccessful. Although a crash at Chimborazo was believed to be the most likely, no wreck could be found. After the crashed plane and its occupants had been considered missing for more than 26 years, the remains were found on October 17, 2002 by Ecuadorian mountaineers who used the seldom traveled integral route at an altitude of about 5400 m east of the Chimborazo main summit.

Chimborazo on the coat of arms of Ecuador

Sketch of the location of the peaks, the refuges and the main routes on the Chimborazo

Climbing the Chimborazo is very popular with mountaineers. Despite its height, it is easily accessible and the normal route is comparatively easy to climb.

The easiest and most popular routes are the normal route ( level of difficulty I / F-PD-) and the Whymper route (II / PD +). Both routes start at the Whymper Hut and lead via the west ridge and the Ventimilla pre-summit (6228 m) to the main summit ( Whymper or Ecuador ) (6263 m).

There are various other, less used and mostly more difficult routes over the different sides and ridges to one of the following summits: Main Summit ( Whymper , Ecuador ), Central Summit ( Politecnico ) and East Summit ( N. Martinez ).

There are two huts in operation, the Carrel hut (4850 m) and the Whymper hut (5000 m) a little further up. The Carrel Hut is accessed by a road and can be reached from Riobamba, Ambato or Guaranda. The Zurita hut (4900 m) on the Pogyos route is no longer in operation.