The Codex Vaticanus Graecus 1209 ( Bibl. Vat. , Vat. Gr. 1209; no. B or 03 after Gregory-Aland , δ 1 by Soden ) is a parchment manuscript with the almost complete text of the Old and New Testaments in Greek . It was written in uncials (capitals) in the 4th century . The Codex Vaticanus, together with the Codex Sinaiticus, are the most important Greek manuscripts in the Bible.

The Codex Vaticanus consists of 733 leaves (folios), 591 of which are inscribed with the Old Testament text and 142 with the New Testament text. The Old Testament part is almost completely preserved, in the New Testament the part from Hebrews 9:14 is missing . The pastoral letters (1st and 2nd Timothy, Titus, Philemon) and the Revelation of John were rewritten in the 15th century and are cataloged separately as minuscule 1957 . It is not clear whether the original manuscript may have included other apocryphal books (such as in the Codex Sinaiticus and Codex Alexandrinus ) and whether the Revelation already belonged to it.

The work was done by two scribes, one of whom wrote the entire New Testament. Probably in the 10th century, the very faded script was neatly redrawn by a monk. The missing parts were also added in lowercase letters.

The format is 27 × 27 cm (the sheets used to be larger), the text is written in three columns with 40–44 lines (in the New Testament 42 lines) and 16–18 letters per line. Three-column manuscripts are quite unusual. In some poetic books of the Old Testament the text is in two columns. The parchment is very delicate and fine.

The uncial letters are small, simple and written without interruption. The Ammonian Sections of the Eusebian Canon and the Euthalian Apparatus are missing. 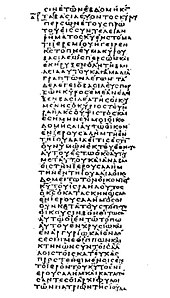 The Codex Vaticanus is the oldest complete Greek manuscript of the Old Testament and is also considered the best manuscript of the Septuagint version for many books . Both editions of the Cambridge Septuagint are based on a diplomatic reproduction of the text of the Codex Vaticanus - both the hand edition by Henry Barclay Swete and the (unfinished) large critical edition by Alan England Brooke, Norman McLean and Henry St. John Thackeray. The latter is for the books Josua - 2 Kings , in which the Göttingen Septuagint has not yet appeared, the only scientific edition with a comprehensive text-critical apparatus to this day. In contrast, the Göttingen Septuagint and the hand edition by Alfred Rahlfs offer an eclectic text. But the Codex Vaticanus also serves as the most important textual witness of the oldest Septuagint for most books.

However, the Codex Vaticanus does not contain the text of the old Septuagint in all books. Exceptions are about the corpus of Daniel writings where the Codex Vaticanus (like almost all Greek manuscripts) the Theodotiontext contains, and the book of Isaiah , where he the hexaplarischen provides text. The text of Genesis was lost early up to Gen 46.27 LXX and was supplemented in lowercase  letters in the 15th century; here the codex is therefore worthless from a text-critical perspective. The history books Richter, Ruth (?), Parts of Samuel and Kings (2Sam 10 - 1Ki 2.11 and 1Ki 22-2Kn 25) as well as Chronicle and Esdras-β form another special case. In the Vaticanus, as in most other Greek manuscripts, there is a clearly formal Hebrew revised text (so-called kaige text); In some other books of the Old Testament, a similar, albeit easier, formal adaptation of the Greek text to the Hebrew reference text (e.g. in the word sequence) can be recognized. The differences can be traced back to the fact that the Codex (or its predecessor, which has not survived) was based on scrolls of different origins.

The following table lists the books of the Old Testament in the order of the Codex Vaticanus. In the first column the page number in the Codex is given on which the respective book begins, in the second column the Greek book title as it appears in the Codex as a heading, in the third and fourth columns the usual Latin and German book names. The last column indicates where the books can be found in the edition by Rahlfs or Rahlfs– Hanhart .

Notes on the table:

The text of the New Testament belongs to the Alexandrian text type . It was developed by Kurt Aland of Category I assigned (= very special quality).

In the Gospels there is a division into chapters that otherwise only occurs in Codex Zacynthius and the minuscule manuscript 579, according to which Matthew 170, Mark 62, Luke 152 and John have 80 chapters. The book of Acts divides in two ways, one in 36 and one in 69 chapters. The second division is also in the Codex Sinaiticus . The Catholic letters and Pauline letters offer an old classification.

In 1995 so-called “umlauts” (..) were discovered in the Codex Vaticanus. Two horizontal dots on the edge of the text, around 800 in total in the New Testament. It was recognized that these signs mark places of textual uncertainty. The date of their creation is still debated. In the upper picture on the right, two of these umlauts can be recognized on the left edge of the left column and one in the middle of the right edge of the middle column.

The Codex Vaticanus was probably written in Egypt in the 4th century. Caesarea in Palestine would also be possible as a location . Nothing is known about the further history. It has been in the Vatican Library in Rome since 1475 at the latest (perhaps since 1448) .