Even when he was in the Miss Switzerland year in office, the Eastern Swiss regional broadcaster TVO started a series under the name TVO Extra with Fäh as the presenter. Fa reported, among other things, on the WorldSkills World Championships in London in 2011 and in Leipzig in 2013.

Fäh is a volunteer ambassador for the Swiss Red Cross SRK and is committed to the prevention and early detection of breast cancer. 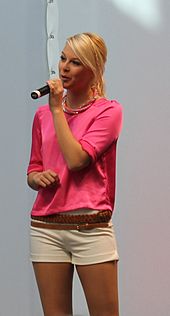 On August 15, 2012, after a year of training, Fäh climbed the Matterhorn together with her friend Lorena Oliveri and two mountain guides . Motivation for this was the fact that they, like some other candidates of the Miss Switzerland election in 2009, this mountain with a quiz of the Swiss television had not recognized.

In May 2011, Fäh presented the song Ich & du in the Musikantenstadl in Poreč , Croatia . Fa also performed 60 times as lead singer in the Christmas circus Salto Natale of the Knie Circus . At the end of 2011 he sang Menschen für Menschen in a duet with Al Bano as part of the gala .

In November 2013 Linda Fäh brought out her first hit single called Infinite Like the Sea . In May 2014, her debut album Du or none was released by her record label Telamo . Shortly afterwards, Linda Fäh performed her song Augen wie Feuer in the Musikantenstadl Friborg . Another concert took place in August 2014 in the ARD telecast every Sunday instead, where she stars on Venice sang.

Faith's second album You Can Fly was released in September 2015. At the end of 2015, she appeared on the SRF1 broadcast “ Klingende Weihnachten” , which she also hosted. Her single Crazy Night was released in the summer of 2016 .

Fäh also presented the song in the show Schlager und Meer , which was recorded on a cruise ship in the Persian Gulf and broadcast on MDR and SRF.

In May 2017, Linda Fäh introduced the single The Perfect Heartbeat in Prix ​​Walo as the prelude to her third album , which was broadcast live from the Kongresshaus Zurich on StarTV. The album Herzschlag was released in spring 2018 and reached number 7 on the Swiss album charts.